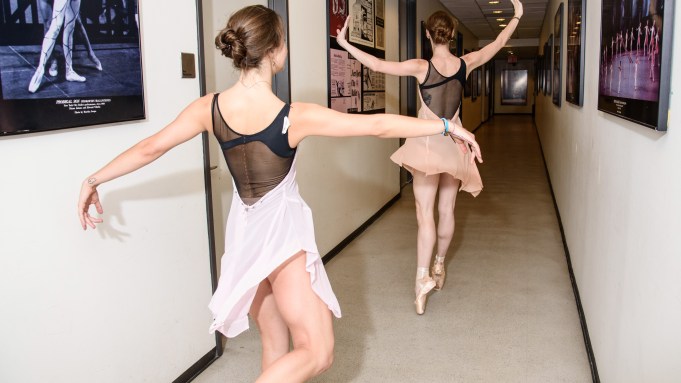 NEW YORK — Frolicking through the halls of the New York City Ballet’s Formica underbelly, corps de ballet members Indiana Woodward and Emilie Gerrity — dressed in airy chiffon costumes by Narciso Rodriguez — have reason to celebrate. Their close friend, Lauren Lovette, has chosen them as stars of her first choreographic effort for the company — set to premiere at City Ballet’s gala on Tuesday with a cast of 17 all dressed in Rodriguez’s designs.

Giddy and lackadaisical are words not oft employed to describe the ordinarily stern ballet environment. But that departure is deliberate, per Lovette, who cast her closest comrades in the piece, titled “For Clara,” and honed a rehearsal environment where “I thought if I could give people one or two hours a day where they feel good about themselves and remember why they love dancing, then I could do something worthwhile, something special,” the 24-year-old says after an afternoon run-through, where she choreographed the piece’s final steps.

A known sunny presence in the company, Lovette — promoted to principal in June 2015 — has spread her wings in the last year, rising to become one of City Ballet’s perennial faces, her angelic disposition gracing Parisian Métro stops this summer in ads to promote the company’s Théâtre du Châtelet residency.

Lovette, who naturally gravitates toward clean, simple designs in her own wardrobe, found the collaboration with Rodriguez to be organic. “He was my number-one choice; I was ecstatic. I didn’t know who he would be as a person, he is so nice and humble and down-to-earth. Our first meeting went so smoothly,” she says.

At the time of their initial discussions, Lovette only had a rough idea of the steps of “For Clara” — she hesitated to lie out the choreography until she had her cast in the studio, leaving only two weeks’ time to map the 15-minute piece. “I knew he would have an idea,” she says of her trust in the designer.

For the occasion, Rodriguez has created a tableau of nude and pale pink — their sweetness curtailed with graphic black inlays, “to take the sort of classical romantic things about ballet and give them an edge,” he says.

Key dancers, Gerrity and Woodward included, will don flotsam dresses with black mesh underlays. Rising corps dancer Unity Phelan will be dressed in a light pink leotard, with black bands cutting a sharp figure at her obliques. The corps will uniformly dance in all black, their Empire waist leotards paired with a single-ply long chiffon skirt.

While Rodriguez originally envisioned the chiffon garments as translucent and rather revealing, an “ongoing debate” has since transpired – leading City Ballet’s costume shop to develop linings for each costume. “I completely understand that there is the illusion of someone wearing nothing underneath and then the shock value of that, which I guess they weren’t into,” he concedes.

On his approach to the project, Rodriguez adds: “I think the costumes should be about them and sort of liberate their bodies so you can see them in action, there is the ornamentation of dance — its storytelling aspect — and for me it’s about focusing on their hard work.”

While fun shenanigans may be amok in Lovette’s studio, the work is tedious nonetheless. In “For Clara,” dancers undulate in aquatic formations, spiraling to the ground and leaping cross-stage to a rich score by Robert Schumann. Lovette says the choreography is inspired “by things that I feel pretty doing, so I feel like maybe [the cast] will feel pretty doing it, too. I want to give people the stuff I see them practicing on the side but can’t always do. Whether the ballet is a success or not matters less to me than people having a really good time and getting something out of it.”

Lovette’s debut is first on the gala’s agenda, to be followed by another premiere by Peck, City Ballet resident choreographer. With a score by Bohuslav Martinu, his third work with the composer, Peck has decided to tackle a pas de deux – enlisting Van Noten to design its two costumes.

“For me I feel more secure working with larger groups and feel a little more vulnerable with this setup because it’s just two dancers. It’s just a different kind of formula to work with, it’s been challenging and fun,” he says of the piece.

With little to hide behind, Peck — observed at a fitting for the piece’s costumes — is astute of each detail. Principals Amar Ramasar and Sara Mearns will wear an earthy color palette inspired by mid-century artists including Mark Rothko.

The piece’s choreography is taxing — as both dancers were observed post-rehearsal, drenched in sweat. It’s lucky then that Mearns’ ensemble — a simple dress — is an anomaly for ballet costumes, which can typically prove restrictive and warm. Ramasar will wear a shirt and pants, accompanied by an unconventional one-shouldered embroidered vest.

Van Noten says of the project: “I sought that the male protagonist, danced by Amar, be rooted in the palette of a man’s sartorial wardrobe. For the female character Sara portrays, our references remained more ethereal. The hues and warmth of an autumnal sunset.”

For him, the connections between dance and fashion are boundless: “Clothing is a second skin that can emphasize movement, form and grace. It may nod to who we may be, it is as visual as it is sensual.

“All of these aspects of garments and a designer’s expression can [relate to] the intentions of a choreographer in building a moment, a tension, a unison, a character, a situation, a story.”