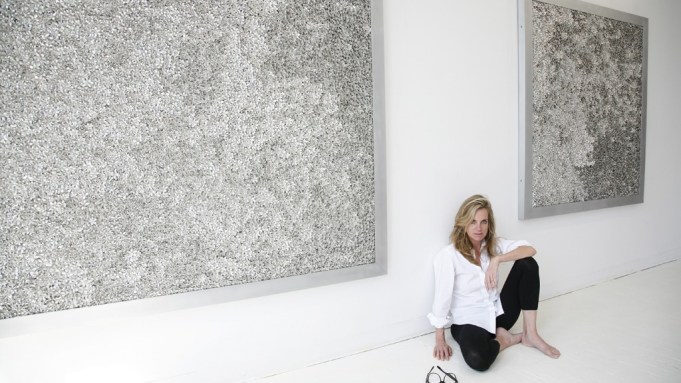 NEW YORK — On an unseasonably warm day in Rachel Lee Hovnanian’s bright and airy Chelsea studio, there is a barrage of electronic alerts going off.

The artist, here to walk through her latest exhibition “Mud Pie” (opening Thursday at Leila Heller Gallery) cuts a welcoming figure, posed between a series of elaborately set tables in slim cut black pants and a crisp white button down shirt. She doesn’t react to the unseen beeping, ringing, trilling devices — she doesn’t seem to notice the din. The scene is almost exactly a life-size replica of one of the tableaux from her last show, an exhibition of photographs and sculpture entitled “The Power & Burden of Beauty,” where her beauty queen trophies in elaborate luxury settings turned to miniature bottles of vodka, painkillers and steak knives to combat the isolation of their devotion to the surface of things. Hovnanian’s latest exhibition similarly probes the inauthentic, but this time in 3-D.

The largest dining table looks familiar, because it is. It is also where the noises are coming from. “It’s [the photograph] ‘Dining Table,’ but I took it into 2012,” Hovnanian explains. While in “Dining Table” two statues sit impossibly far apart, separated by an endless table (and, one imagines, significant marital distance) here in the gallery at “Dinner for Two” the table is long, but the diners are a pair of iPads attached to empty chairs at head-height. They play recordings of a man and woman separated only by their own distractions: both are lit in the blue-white glow of the screens of their respective (unseen) devices. The sounds of their digital amusements fill the space. Neither ever speaks, though periodically they make eye contact. Mostly they smile to themselves, fully absorbed.

“You know what that is, don’t you?” Hovnanian raises an eyebrow at the sounds, “she’s playing Words with Friends and he’s playing Angry Birds….I see people on dates doing this, families out to dinner all on their devices. That’s a family dinner, today.”

There exists a popular argument in today’s culture (recently discussed at length by The New York Times, Wall Street Journal, National Public Radio and Atlantic Monthly) that technological advances, which we have bought into en masse as a great connecting force, are slickly disingenuous: that the machinations of technology effectively pull people farther apart rather than bring them closer together. Essentially, that technology is preventing actual connections in lieu of digital ones. Hovnanian is worried that all the digital clamoring for our attention has drowned out the authentic reality of the temporal, that we’re diluting our own experiences. “Mud Pie” has a multifaceted approach toward what the artist refers to as the “unreal, real, dream-like awake state” of things. Firstly, there’s the concept of memory and it’s essential fallibility. Then, there’s narcissism and technology.

Entry into the gallery will be accessed through a cafe of Hovnanian’s creation, complete with aluminum counter and stools. Footage shot in the artist’s home state, Texas, of a breezy, pastoral scene called “Outside Nacogdoches” plays on flat screen televisions behind the counter, mimicking windows. An actress wearing a tag blazoned “@CafeWaitress” (tweets to the address will be answered) will greet guests and offer them what’s on the menu; coffee, lemonade or orange juice or “for eatin’, we have bacon; we have tacos; we have barbecue pork and for dessert we have pecan and apple pie,” Hovnanian recounts in a charming put-on Texan drawl. If you ask @CafeWaitress anything off-script, she’ll ask Siri, the iPhone 4S application, and play you the response. “I remember these cafes,” Hovnanian says, “and they’re important to my understanding of who I am now….But you can’t remember whether that’s what they were really like, or whether your memory is fooling you. We constantly revise our memories, editing and reinterpreting.”

The comestibles at the cafe are all made by the artist, and not particularly nutritional — working with a New Jersey based food scientist (“a flavorologist,” Hovnanian notes), her creations taste exactly like what they are advertised as while having little, molecularly, to do with them. What she calls “Tex-Mex” is about the size of a thimble and the consistency of a wine gum past it’s sell-by date. Though it has the multiple layers of a burrito bowl, the affect is not altogether pleasant.

“I’ve heard the Willy Wonka comparison,” Hovnanian shrugs, “but it’s just a good way to segue into what we’re talking about. You can smell this,” the artist proffers her “Mud Pie,” a portrait of which festoons the show’s press materials. It is hardened and chalky and made of dirt, though it sits in an elegant silver pie pan, “and it smells like apple pie. But it’s not. It’s this non-real real, and our world is so much of this: we don’t even know it’s happening to us. This is what ‘real’ life has become. Country Time lemonade’s advertising says ‘made with real lemons!’ but, you know, it’s powder. Kids don’t even know what real lemons taste like anymore.”

This is the basis of Hovnanian’s show: the mud pie is the most real of anything in the gallery, being made of earth and water versus the powdered Country Time or Tang or milky hot chemical water that smells and tastes like airplane coffee, but it is not really a pie. Hovnanian adds, “I made these as a little girl to mimic my mother. It was real to me.”

Everywhere in the studio there seem to be spectacular vases of flowers. Preternaturally huge white peonies, roses, lilies, freesia, a narcissus or two and a few white tulips burst triumphantly. They look perfect. Too perfect. “They’re all fake,” Hovnanian grins, “When you look closely you can see that they’re not real….Like anything, you have to look closely.”

Hovnanian isn’t condemning technology via “Mud Pie.” “I’m just as guilty. I have Twitter, I have these things,” she explains, “but how much of technology do we use now just to look at ourselves, at these creations that we’ve made of ourselves? With ‘The Power & Burden of Beauty,’ I wasn’t saying it’s not good to look good, I was saying that it’s just such a burden to have to go through that, to have to deal with it, to have to be a certain way. Technology is the same, it’s become a burden that’s oppressive: the e-mails come one after the other and you finish one and there’s another on the way. We’re fast, we’re so fast now. That’s why fast food! When I was growing up there were cafes, a lot of them, now they’ve been replaced by fast food.”

On the far wall are a series of eight panels, metallic in tone and sheen and heavily textured. They catch the light and seem to undulate with it. They’re made up of thousands of tiny narcissus flowers, cast in metal and painstakingly applied by hand to a metal backing. “I call these my motherboards; it’s the idea that we get sucked into the screens,” Hovnanian says. “They’re sort of a warning. I find myself all the time walking around with my head down, sucked into my phone or my computer. The most organic thing is the flower, but I’ve made it in metal and so now it’s not a flower anymore, because we’re so inorganic.

“People don’t even go up and say hello to each other anymore; they tweet, they e-mail, it’s digital. Narcissus looked at himself in the screen, the mirror, the water, and he could never pull himself away, he died looking at himself. When we try to make a changing, natural object into something permanent, we’re in denial. You can’t possess it: that destroys it. And so this is like, ‘OK, I’ve got to stop this, I’ve got to realize that it’s wonderful to connect and it’s such a great way to be able to work, but I have to be able to get myself away from this addiction.’”

For those looking to follow suit, Hovnanian includes a recipe for “Mud Pie” in her exhibition catalogue. “Some people have never made one, either you have or you haven’t. It’s a way of saying, ‘Take a little break, reconnect to earth, make a mud pie, get your hands dirty,’” she shrugs.