Nasty Cherry, a Band Formed by Charli XCX, Is Thrown Into the Beast Called Fame

"It wasn’t a competition, it was just Charli going, ‘I believe in you four, so how do you make this work?’"

The band Nasty Cherry is in a black SUV speeding downtown.

Lead singer Gabbriette Bechtel, guitarist Chloe Chaidez, bassist Georgia Somary and drummer Debbie Knox-Hewson are in New York doing press; they’ve just wrapped a session at MTV in Times Square before hopping into a supersize Uber. While the group of four is around the corner getting their gear into the trunk, a group of Gen Z fans who were in the crowd for the interview stand outside MTV’s headquarters at the Viacom building. They’re wearing mini backpacks and platforms and glittery eye makeup that wouldn’t look out of place on the HBO show “Euphoria.” They’ve also got red, bobbed wigs on — when asked where they got them, they all reply, “Charli XCX gave them to us!”

Charli XCX is the pop star who brought Bechtel, Chaidez, Somary and Knox-Hewson together to form Nasty Cherry; the reason behind the dramatic change their lives are going through.

Most of them hadn’t met each other before 2019, and if they did, their exchanges were casual. Somary didn’t know how to play the bass until she got into the band; Bechtel had no formal background as a singer, and spent most of her career until this point modeling and trying her hand at photography.

But Charli saw something, a spark and a potential dynamic for stardom, in all the girls. It was always her dream to create a band, she says.

“I tried to form loads of bands when I was younger, but they all failed because no one was in it as much as I was,” the pop artist says via e-mail. “When I started out in music, I felt a bit isolated. I wanted to be in a community of other artists and people around me, but I never found it.” 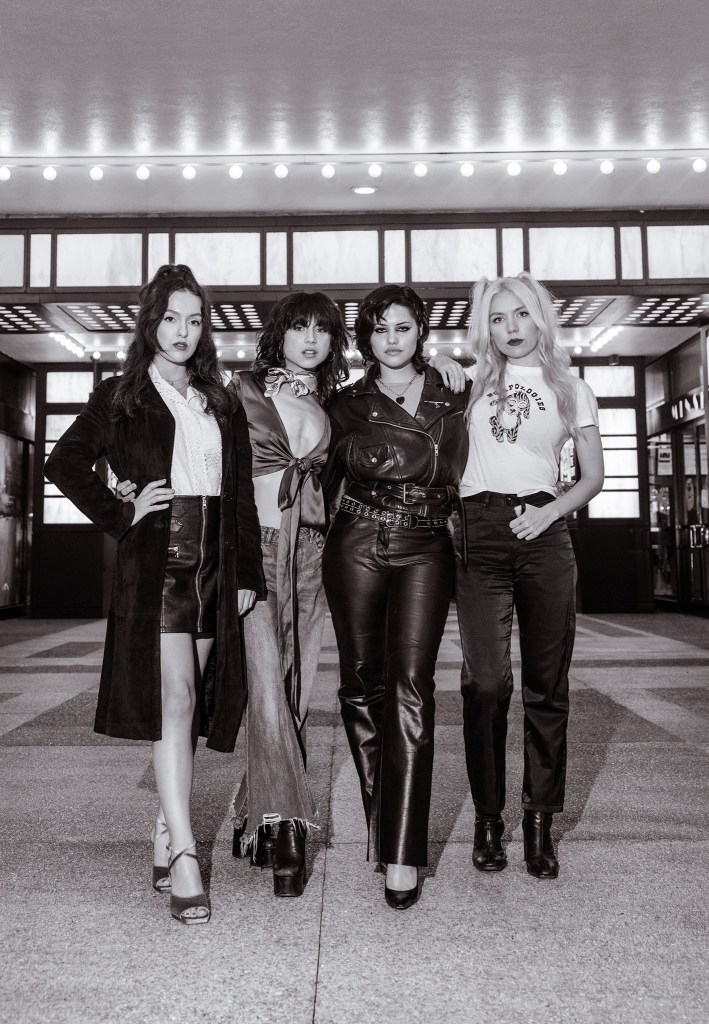 So Charli XCX got the group together to both make music and to star in the new Netflix show “I’m With the Band: Nasty Cherry,” a docu-series out today that chronicles the band’s journey of moving into a Los Angeles home together, making an album and getting to know each other.

If this setup sounds anything like the “Making the Band” or “Popstar” shows of the early Aughts, when singers fought it out to form groups like Danity Kane and Eden’s Crush, Nasty Cherry has heard the comparisons far and wide during their press run. And they don’t necessarily agree.

“There’s a competitiveness about those shows which wasn’t prevalent in ours at all,” says Knox-Hewson, squished in the back of the car next to Chaidez and Somary. “It wasn’t an audition process, it wasn’t a competition, it was just Charli going, ‘I believe in you four, so how do you make this work?’ All of those comparisons, to me, didn’t feel that relevant.”

“There’s no elimination process, there’s only collaboration in this b—h,” Chaidez adds.

“If there was an elimination process, I probably would not be here,” Bechtel says, shifting in her solo seat in the middle of the automobile.

“Imagine one of us gets kicked out every episode,” Somary pipes up from the back corner.

“Imagine they do those interview things with us,” Bechtel laughs. “I’ve said some crazy s–t. I’d get kicked off.” 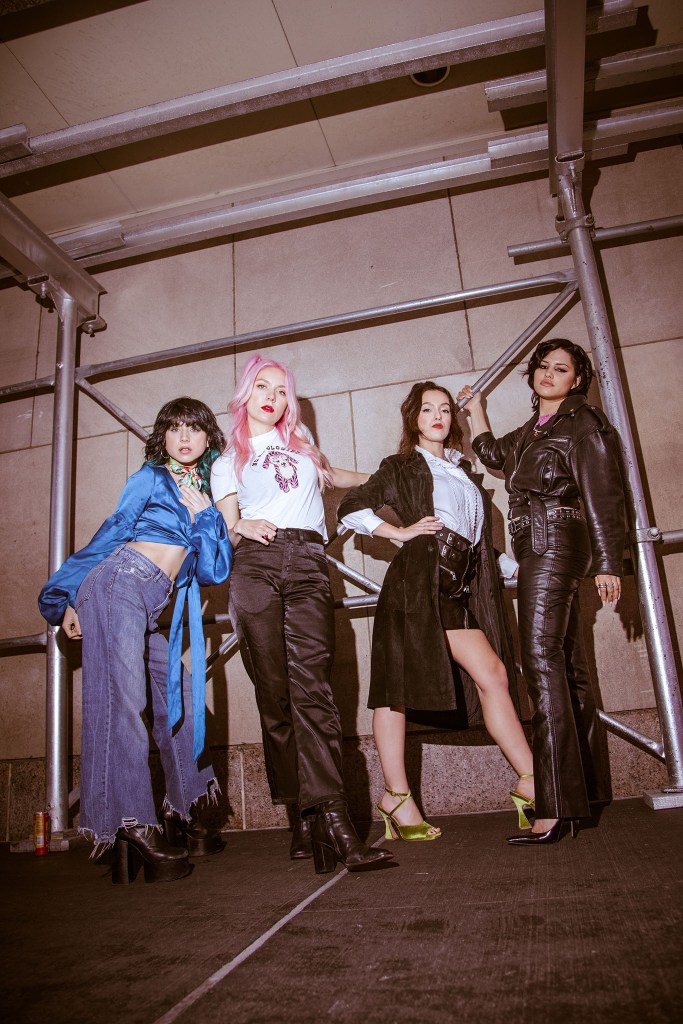 The conversation in the car — which is stopping at their Airbnb in Williamsburg in Brooklyn before they perform a show opening for Charli XCX at Terminal 5 — goes like this for most of the ride.

Knox-Hewson, a pink-haired Brit with huge blue eyes who grew up on the Greek Island Skiathos, speaks in long, considered sentences, giving the feeling that she’s thought deeply about the topics at hand.

Chaidez, hailing from East L.A. and whose father was in a punk band called The Undertakers when she was growing up, has a raspy voice and swears like a sailor — though an energetic and good-natured one.

Bechtel, who’s from Orange County, Calif., is simply too cool, laid-back and aware of it all. She has pouty lips and speaks in a slow drawl, with spouts of energy here and there. She’s started early with fashion, attending shows for Savage x Fenty and Marc Jacobs. Somary, who’s also British, gives off an alternately sweet and brutally honest vibe.

Given their friendly banter and the sweet things they say about one another, (“I remember this tender bathroom moment [Georgia and I had], and I was like ‘man, she is f–king cool, maybe one of the top coolest b—hes ever,’” Chaidez says at one point,) it feels like they’re old chums. It’s hard to believe they only met earlier this year.

“We had to jump straight into an incredibly intense, whirlwind, creative relationship,” Knox-Hewson explains. “You think how nervous you’d be to show your best friend a song you’d written, imagine three women you haven’t ever met before and you’ve got to create together. Somehow, it really worked. I had a gut feeling that it was going to be special, and thankfully it is.”

“Thank God!” Bechtel says, as the other two women echo with “thank God!”

The most difficult part of filming, they say — apart from sharing a bathroom — was being vulnerable with each other and being open in front of the cameras, in addition to the long hours of work on their debut EP, titled “Season One,” out Nov. 22.

The first three days after moving in together and starting the show were, as Chaidez puts it, “crazy.”

“We didn’t have mugs or glasses to drink out of for a good two weeks because none of us thought to buy them,” Somary says. “We all had that temporary sense of like, oh no, we don’t actually live here. And then when you’re eating off paper plates for the third week running, eating cheese and meat deli platters, you’re like f–k this.” 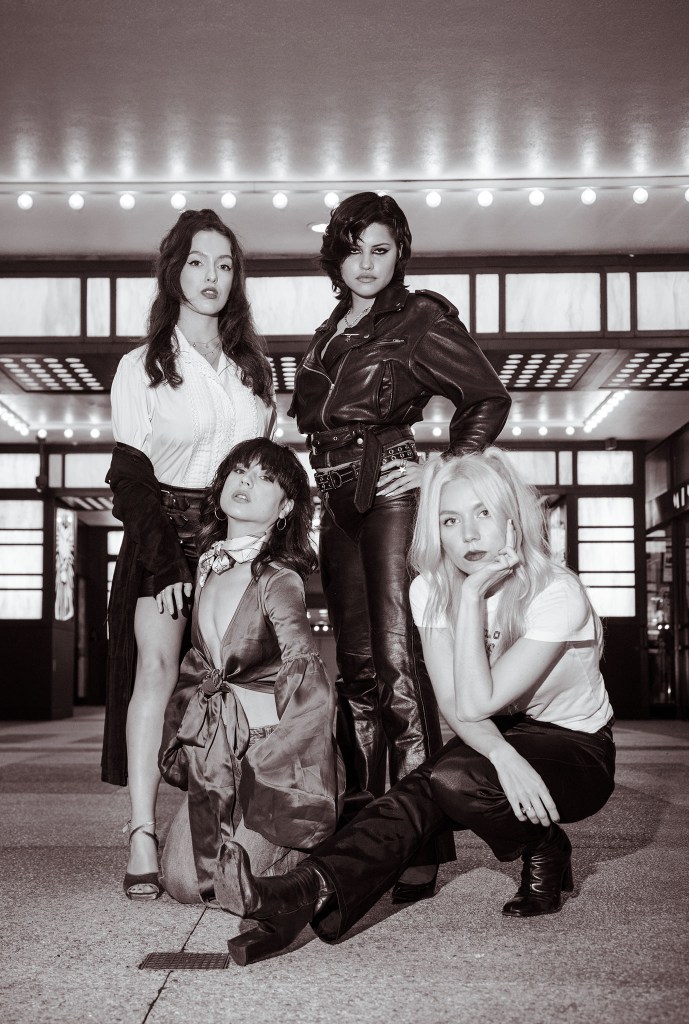 Charli XCX was working on her latest album, “Charli,” while simultaneously running the Netflix show with Nasty Cherry. She describes it as a stressful time, but she wanted to be a mentor-figure for the band, and was involved in the writing of a couple of their songs, “Win,” and “Live Forever.”

“When it came to writing music, it was hard to switch modes because my music is so different from Nasty Cherry’s,” Charli XCX says. “Whenever I was with Nasty Cherry, I tried to switch back to the mind-set I was in when making my first album, ‘True Romance,’ because that was a middle ground we could all understand.”

“She’s hands-on,” Knox-Hewson says of Charli. “All of the most important points to date, getting our EP together, sorting out our set lists, down to T-shirt designs for merch, she’s always the first person we go to.”

They’ve returned to their respective homes since ending filming, but that’s the only thing that’s back to normal. And even that word, “normal,” doesn’t apply to the journey they’re on.

“Back to our normal lives?” Bechtel asks.

The rest of the band breaks out into talk, all at once, their voices rising with excitement. Someone echoes, “No we’re not!” and “Yeah, true,” while Chaidez yells, “World domination!”

How to Get Over a Breakup, According to Bishop Briggs