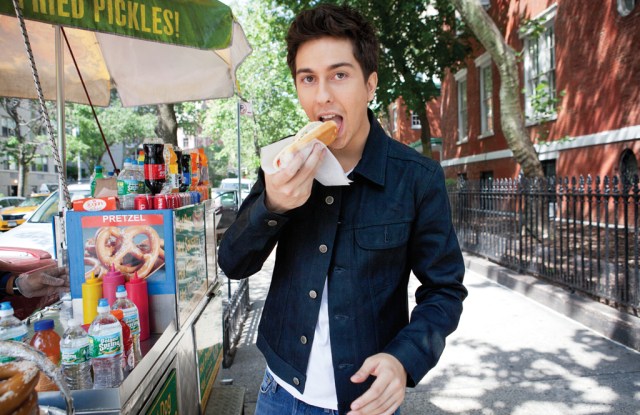 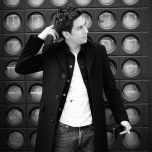 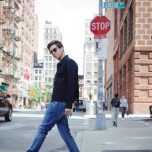 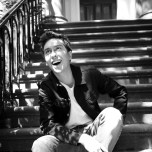 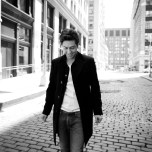 Nat Wolff is brimming with excitement. “He’s got relish! He’s the man.”

It’s an aberrantly warm day in June. The air is thick and spongy. College students in makeshift bikinis sun in Manhattan’s Washington Square Park, laying bath towels down on the baking concrete. It’s midafternoon and Wolff is understandably a little peckish. He’s in hour three of a photo shoot, in which he’s modeling some of fall’s best men’s wear offerings.

“Rag & Bone…” he searches for the reference. “I think I’ve heard of that before.”

He’s taking a break from posing on a shaded bench in a quiet corner of the park, eager to get a quick bite in.

“This is going to be kind of amazing,” the lanky 20-year-old beams, watching his street dog get loaded up with ketchup, mustard and a copious amount of the critical relish.

“Yup, I knew it,” he says, shoving the last ketchup-y bite into his mouth, annotating his joy with a thumbs up. “OK, what’s next?”

What’s next is huge. Not in the immediate sense, but in the not-too-far future. In six weeks, “Paper Towns,” 2015’s juggernaut of teen romance, will be released. Wolff plays the lead as Q, a nickname for Quentin. It’s a familiar coming-of-age construct. Q’s the shy, sensitive, overlooked-in-high-school type; a variation of John Cusack in “Say Anything.” Cara Delevingne plays Margo. She’s today’s Manic Pixie Dream Girl; the sort that climbs through bedroom windows and wears Converse high-tops. Q longs for Margo. She, of course, doesn’t know he exists.

An impromptu night of pranks unfolds in which Q and Margo bond; a seismic turn of events for Q. And when the ever-evanescent pixie Margo vanishes the next morning, Q makes it his mission to find her. She’s peppered the city with a series of clues for him to track her down and thus the treasure hunt begins. He packs his parents’ Champagne-colored minivan with his two dopey friends and one of Margo’s hot ones and they embark on a road trip. “And hilarity and hijinks ensue,” Wolff chuckles, concluding his plot synopsis.

It’s a sequel of sorts to last year’s wildly successful “The Fault In Our Stars,” in which Wolff played a supporting role. Both movies are adaptations of teen lit novels by John Green. They also share the same screenwriters. “Fault” cost the studio $12 million to make and grossed more than $300 million at the global box office, making it one of the most profitable movies of 2014. “Paper Towns” is sure to bait the Gen Z-ers using the same formula.

That said, 21st Century Fox isn’t taking any chances. They’re hyping “Paper Towns” even more than its predecessor with an all-sides marketing campaign. Green rolled out the first trailer on the “Today” show in March. It was shown to hundreds of superfans the night before at a sold-out screening in New York City. They built anticipation for the release of a subsequent trailer with a countdown on social media, finally airing it during the season six premiere of the tween sensation “Pretty Little Liars.” The studio also created a Twitter handle, Facebook page, Instagram account and Snapchat hashtag for their touchscreen-friendly audience. Each account has a healthy following.

Then there’s the bus tour, for those who want to meet Wolff and Delevingne IRL. Mimicking the film’s road trip, Wolff, Delevingne and Green will be crisscrossing the U.S. in the 10 days leading up to the movie’s release. Who they’ll smile and wave at remains to be seen — the destinations along the “Get Lost Get Found” tour, as it’s called, are determined via audience participation. Fans bid for a stop on the tour by reblogging and “liking” a GIF assigned to their state on the movie’s official Tumblr page. Each reblog-like combo is one vote.

“Recently, a lot,” Wolff says. He’s discussing fame and a frittering anonymity, asked specifically about the frequency with which he’s approached by fans. “Weirdly since the ‘Paper Towns’ press started, it’s been way more. But it’s cool. The people who read John Green’s books are always really smart and articulate and have nice things to say. But yeah, it’s a bit harder to go out now. I will say New York is so much easier than anyw-”

“Excuse me?” A pair of timid preteens, as if on cue, approach. “Can we take a picture with you?”

But he’s used to attention. He held a niche fame growing up in New York when he starred in “The Naked Brothers Band,” a short-lived Nickelodeon show based on the real-life band Wolff and his younger brother Alex had — they still do under the new, cooler name Nat & Alex. Music is a palpable passion for Wolff. During lulls in conversation, he’ll occasionally croon a lyric from Prince or The Stones under his breath. His eyes light up when he announces the band will have a single, titled “Look Outside,” in the movie and on the soundtrack. He maintains any unwanted attention has been worth it, as long as he gets to do the movies and music he loves.

“When I was a kid it bothered me. I didn’t like having attention on me, but then I sort of adjusted; now, I see it as a part of the whole thing,” he says. “The good thing is I learned from a young age that people being a fan of your work and listening to your music and seeing your movies, it’s awesome but it’s all transient and unimportant if you don’t have a passion. Truly, my goal is to be the best actor and best musician I can be, the rest is just an added bonus.”

It’s unclear whether Wolff realizes how much the movie will catapult his stardom. With “Paper Towns” he’s entering into the league of teen heartthrob, a level of fandom that includes posters of his face on bedroom walls and a steady stream of stalker-y fanmail. But unlike those before him (Robert Pattinson et al.), Wolff doesn’t have the hunky, handsome thing going. He’s good-looking but in a more offbeat way: pale and slightly drawn, like a young Edward Furlong. One thing Wolff does have on his side is ample charm. Most of his stories are witty, self-effacing anecdotes — the kind that will be perfect for talk shows (he told one involving accidentally handing Ed Norton an HPV pamphlet; another about when he first met Delevingne and how she immediately took off her shoes and ran around the room. He slips into an adorable British accent doing an impression of her).

He’s also humble — or at least feigns it well. “I mean, I just hope people like the movie,” he says with a shrug, when asked if he’s ready for a new normal post-“Paper Towns.” “The rest of it is out of my control so I let it be out of my control. It would cause me too much anxiety to assess my career and [for] that to be a factor. It can’t be a factor. I just need to work on things that I’m proud of and be nice to people who come and see them.”

With that, he walks the few blocks back to his apartment with his guitar strapped to his back, fading in among the tourists.