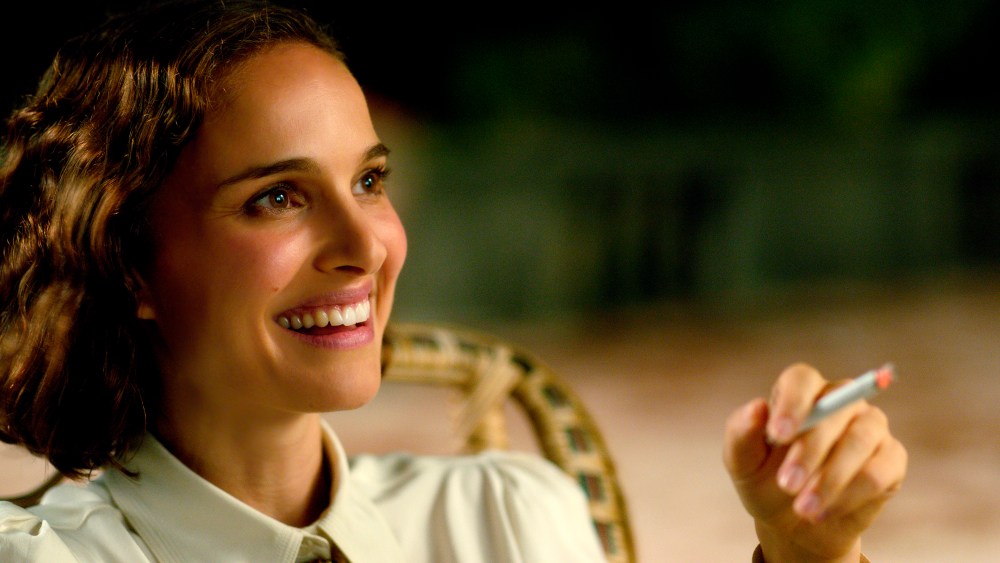 Suspend disbelief — at your own peril.

“Planetarium,” opening in New York on Aug. 11 and in Los Angeles on Aug. 25, stars Natalie Portman as Laura Barlow half of a sister act — they’re American mediums touring Europe, one seance at a time. The rich of pre-war Paris, who swoon — literally — over younger sister Kate’s (Lily-Rose Depp) abilities, can’t, or don’t want to, face reality.

Nor does Andre Korben (Emmanuel Salinger), a powerful movie producer, who is enthralled with the sisters’ performance at a club. He later becomes so involved in his work that he misses the signs of impending doom — the rise of fascism and anti-Semitism.

On stage, Laura holds her sister’s hand as Kate rolls her eyes back in her head and she obliges a grieving mother desperate to hear the voice of her dead child.

“Hoax!” said Portman in an interview with WWD. “Of course it is. I don’t really believe in this kind of stuff, even though I think it’s possible.”

That slight opening would be enough for Korben, who asks the Barlows to move into his house. Laura embarks on a film career with Korben’s director, while Kate becomes a guinea pig for Korben’s experiments into filming ghosts with a special camera that he thinks will revolutionize cinema.

Director Rebecca Zlotowski was interested in the destiny of the Fox sisters, three American mediums from New York, who lived during the late 19th century. A client once hired one of them to live in his house and incarnate the spirit of his late wife.

Portman boned up on the Fox sisters and Victoria Woodhull. “They were super-fascinating,” she said. “[Woodhull]  was in the Suffrage movement. Men didn’t want women to speak, but they believed that women, like children, could commune with ghosts because they were simpler. Women pretended that ghosts were speaking through them and would have séances where they’d tell the men how to spend money or to give women the right to vote.

“I think the film made me think about the connection between a desire to speak with ghosts and movie-making,” she added. “It’s interesting, when you make a film you can communicate with people forever. You can still experience people who are long dead. Even people who died this year, we can watch their movies.”

Portman, who in 2011 won an Oscar for best actress for “Black Swan” and was nominated for an Academy Award for “Jackie,” relished her costumes in “Planetarium,” which included high-waisted pajama pants, silk paisley robes, a striking red dress, and for a scene where she’s lying on the beach on the French Riviera — not a stitch of clothing.

“I think the costumes are the most beautiful costumes I’ve ever worked with,” she said. “They were so incredibly beautiful — the colors and materials. In France, where they have all of the craft and knowledge and make things by hand, I got to have this transformation.”

Portman clearly loves the finer things. The first face of Miss Dior fragrance, she’s had a five-year gig with the fashion house. A new ad campaign shows Portman wearing nothing but a heavily beaded gown held up to her body. “It’s been incredible to work with Dior,” she said. “It’s an elegant and luxurious legendary brand. They’re an incredible family to be a part of, and I’ve been lucky to witness all the artisanship over the years to see how they make the couture and the perfume. It’s an amazing experience to work with them. I’m lucky.”

Portman is starring in another upcoming movie that’s generating strong buzz, “The Death and Life of John Donovan.” “It’s about an American TV star’s correspondence with a young boy [Jacob Tremblay] who admires him,” she said. “I play the mother. Their correspondence is revealed [10 years after Donovan’s death] and there’s a scandal.” Tremblay’s character, now a young actor, reflects on the communication and how it impacted both of their lives.

“Planetarium” marked the first time the actress spoke French in a film. Tapped by Zlotowski, Portman was living in Paris at the time with her husband, Benjamin Millepied, who was the director of the Paris Opera Ballet. While she was familiar with the language, Depp wasn’t, but picked it up quickly.

It was Portman who identified Depp for the role of Kate and sent her head shot to Zlotowski. “It was very difficult to find someone who spoke American English and French, who was the right age and could look like we were family,” she said. “I saw a picture of Lily-Rose and sent it to Rebecca with a note, ‘We know she speaks English, why don’t we see if she can act.'”

After the glittery parties and beautiful clothes, reality begins to hit Korben’s circle. Staying up too late and drinking too much leaves Kate much worse for the wear.

Korben is in denial until the end, even when his board demands his resignation, and a member says, “In these troubled times, how do we trust a foreigner?”

“That was the other true story that’s really fascinating: Emmanuel’s character. The board sent him to Auschwitz to die and he died there,” Portman said, referring to Bernard Natan, the wealthy movie producer, who was the inspiration for Korben’s character. Natan, who was considered an innovator in film industry, was convicted of fraud after his Pathe theater collapsed in 1935, and eventually deported to Auschwitz, where he died.

“It’s really devastating,” Portman added. “The reality of France isn’t talked about as much. France was really, really complicit — the government at the time — in sending away a huge percentage of its Jewish population.

“I think that there’s a line in the film where she says, ‘You never know when you’re right before a war.’ You don’t know it’s pre-war Paris. It’s always when you’re on the brink of something dangerous.”