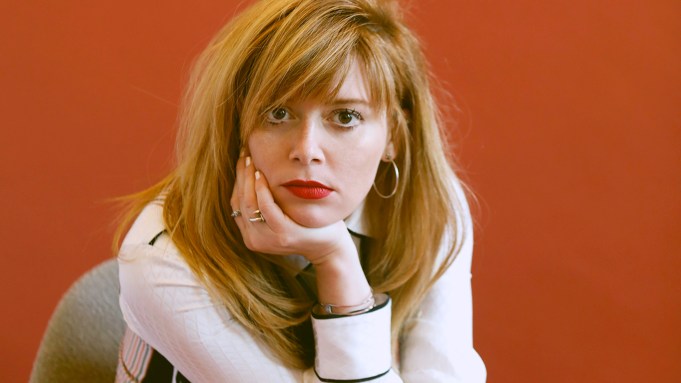 “I would love some iced black coffee,” says Natasha Lyonne. It’s about 10 a.m. on Friday, the day Netflix released the fifth season of “Orange Is the New Black,” and she has a jam-packed day of interviews ahead of her. Coffee — iced coffee — was an absolute must.

Those who watch “OITNB” are well acquainted with Lyonne’s character, Nicky Nichols, who is best described as a walking tornado with a drug addiction and a penchant for smudged black eyeliner. Those who are familiar with Lyonne’s trajectory know that she and Nichols have a few things in common, including a kooky, restless demeanor, which in the case of Lyonne, often causes her to speak in a British accent.

WWD caught up with her about the latest season of “Orange Is the New Black,” her on-screen and off-screen relationship with castmate Yael Stone (Lorna Morello), as well as the film she wrote and directed for Kenzo’s upcoming fall 2017 campaign. Find what she had to say about each of these below.

WWD: We start season five in total turmoil. How will this play out for the rest of the season?
Natasha Lyonne: We end season four seeing Poussey murdered at the hands of authority figures. Season five jumps off with a response to that abuse of power and the injustice around how her death is being treated, and that contains the track to the entire season. A full-scale riot follows and you know nobody is going down without a fight.

WWD: Let’s talk about Nicky’s relationship with Lorna. The turmoil seems to bring them back together again.
N.L.: As we often see in life with the people who we’re closest to, an accident or a terrifying event can bring us close to them again. It overtakes whatever smaller details might have squashed a certain element of the relationship, and so certainly we see that they have a very deep and unbreakable bond, when push comes to shove. And because of the romantic nature of their history, that is in flight, too.

WWD: What is it like filming such intimate scenes with Yael Stone?
N.L.: In the history of our five years working together, we’ve gotten so intimate — like, we can really read each other’s nuances. When we’re taking pauses, if there’s gonna be a little follow-up move that’s kind of unexpected, if the person is kind of angling toward a little bit of improv in a way or wants to change up a bit, we can kind of ESP read each other at this point and give each other the appropriate space to really try new things. Romantically, we’re pretty gung ho. We like each other, and it feels very risk-free, free make outs. We’re not entirely professional about it. We both enjoy slipping into method acting when we’re together for fun.

WWD: What’s your relationship with her like outside of the show?
N.L.: Yael is an incredible human being. She spends a lot of time volunteering and is involved in meaningful causes and takes friendships very seriously. She’s not some dumb starlet trying to get her picture taken. She’s the definition of a good person, and in many ways, we really see her as the moral compass of our show. I think that it’s kind of in juxtaposition with how much fun it is to then throw her around as a sex toy. But there’s definitely an oxymoron there, although I would say that she would happily admit to the fact that she quite enjoys being both. She is a little minx who happens to also be a delight of a human being.

WWD: What other themes come to the forefront for Nicky this season?
N.L.: Anarchy is a big theme for the season. It has sort of a “Lord of the Flies” element. We end up seeing both [Nicky and Lorna] with like the most heart and least selfish behavior, as well as seeing them take it out on each other because it’s just, like, general lawlessness happening, which is also, I guess, a lawlessness of the heart.

WWD: This season takes place over the span of three days. What were some of the challenges of filming?
N.L.: You have to retroactively justify choices. Nicky and Lorna, as much as there might be back and forth between them — coming together and coming apart or maybe Nicky not actively getting high as much this season — you gotta remember that that’s all happening over three days, not three months. They’re not decisions that have had months to settle, like “and now we’re broken up.” It’s the same way you might get into a fight with your boyfriend and that night be like, “That’s it we’re through.” And then in the morning be like, “I love you.”

WWD: Switching gears a bit, you just announced that you wrote and directed a film for Kenzo. What was the inspiration for that?
N.L.: What you hear in the title of the film, “Cabiria, Charity, Chastity,” is “Sweet Charity” with Shirley MacLaine, which was inspired by “The Nights of Cabiria,” the [Federico] Fellini film with Giulietta Masina. I thought it might be funny to make a third part of a trilogy that nobody was really asking for and make it an incredibly surreal one. It follows our new character, Chastity, Maya [Rudolph], on a journey through a mercurial version of time and space. She navigates reconciling her past, and in a way she blends into a major cast of characters, none of whom I can really release. Well, I guess I can. The quality of people who showed up for this movie in front and behind the scenes, it really broke my heart. Just the swelling feeling I would have everyday, like how in love I was with all these people, it really was the greatest experience of my life. I can’t wait for people to see it in September.

Andrew Rannells on Coming Full Circle at the 2017 Tony Awards