Boys’ Night Out With Scott Campbell 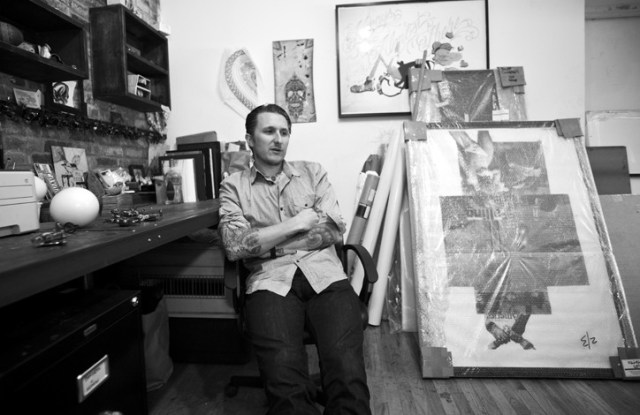 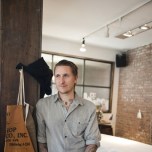 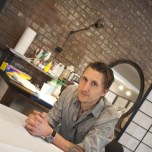 On a recent Tuesday afternoon, every seat is filled in the waiting room of Saved Tattoo, Scott Campbell’s Union Avenue tattoo parlor in Williamsburg. They’re lining up to get what’s become the tattoo equivalent of a designer label, just like Marc Jacobs, Orlando Bloom, Olivier Zahm, Vera Wang, Helena Christensen, Lily Cole and Erin Wasson before them.

The whole place is buzzing with the sound of electric ink-filled needles, like a room full of high-volume hearing aids. The decor is vintage upholstery and skulls, and feels like a Williamsburg hair salon. There are no catalogues of tattoos for patrons to leaf through but “portfolios” of each artist’s work. Nine of them work there full-time. No walk ins — it’s strictly appointment only, if you can get one with Campbell, who nowadays only tattoos when his schedule permits. He mostly works with repeat clients and referrals, and occasionally accepts requests via e-mail if they strike his fancy.

In what could be interpreted as veritable proof that Campbell’s tattoos have become mainstream fashion currency, in December he told NYMag.com that Kanye West, the ultimate fashion wannabe, had come by his studio. Still, when Campbell offers, it’s tempting to jump on a table and get what would be my first tattoo right then and there, thus becoming part of his collection, which is another way Campbell romanticizes his work. “Your heart and soul is poured out into all these pieces,” he says. “As soon as you finish, they walk out the door and they’re gone.”

If he has to credit someone with getting the ball rolling in the direction of the in-crowd, it’s Dash Snow, the New York artist-prince of the downtown party scene, who died of a drug overdose in 2009 at age 27. Campbell started tattooing Snow and his arty skateboard crew, including Nate Lowman and Dan Colen, in 2004. That’s when things started to change. “Falling in with them was really, really motivating, because I come from a really blue-collar, working-class background, and even tattooing is a working-class trade,” says Campbell. “I never imaged that I would find myself communicating with the art world. It felt like this very academic environment, and I didn’t know enough big words to communicate with. But then you see that these guys are just a bunch of skater kid f—ups.”

Then came Jacobs, for whom Campbell’s body art — SpongeBob, M&Ms — was the cherry on top of his 2006 metamorphosis from shiny schlub to shirtless proof that a hard body can happen after 40. Campbell estimates that he’s tattooed Jacobs at least 30 times. The two were connected through Shelly Zander, Jacobs’s longtime fit model and a friend and client of Campbell. Now they’re boys. They have matching “Bros Before Hos” tattoos.

“Yeah, I love Marc,” says Campbell. “He could call me up and say he was thinking of opening up a car wash and I would be like, ‘Cool, let’s wash cars!’ ” Jacobs could also call up and say, “Would you be interested in doing something with Louis Vuitton?” — like he did last year when he offered Campbell a men’s wear collaboration (tattoo-print bags and scarves, available now). This was after Campbell had formally sworn off such projects rather than risk being considered a sellout. “I said out loud, ‘I’m not doing any more commercial or fashion stuff.’ And it was as if those words came out of my mouth and the phone rang, and it was Marc. I was like, ‘OK, except that.’ You know?” He goes on to put himself in the same sentence as Takashi Murakami and Stephen Sprouse, whose past collaborations with Vuitton yielded cult status.

Although Campbell, 33, with his greaser hair and retro style, looks like he could have been cast on “Oz,” he’s a big softy. “I’m a sucker for the whole boyfriend/girlfriend thing,” he says. “I’m the first one to be like, ‘F—it. Do it.’ Like, who cares about next week. If you love them right now, love them right now as hard as you can.” His own body bears the scars of relationships past. “I wanna say I’ve gotten, like, five girls’ names on me,” he says. Instead of getting creative with corrections, he’s taken to just crossing a name out with a line.

Campbell has a small studio in the back, which is just big enough for two assistants and a laser cutting machine. In addition to his tattoo business, he’s found success in the fine art world with his laser-cut dollar bills that are shaped into skulls and plaques reading “I’ll Start My Diet Tomorrow.” He also drains ostrich eggs, cracks them and then draws on them — when he can find them. Campbell’s shown his work all over the world, most recently in Los Angeles, where he has a show up at OHWOW gallery through the end of the April.

He changes, unprompted, into a short-sleeve shirt so that his arms, both fully sleeved in tattoos, will be visible for the camera. He seems pretty comfortable being interviewed and photographed — done it quite a bit, in fact, with recent stories in Interview and on endless fashion blogs — and has gotten better at it, thanks to tattooing. “When I was a kid, I was terminally shy,” he says. “Tattooing forced me to interact with people, so that’s helped me out. Doing press is OK, but Campbell tries “to avoid the people with the textbook ‘make a list of all the famous people you’ve tattooed.’ I roll my eyes at that.”

Good thing I opened with questions about his art show!

Art, says Campbell, is a way to escape the “ceiling” of a traditional tattoo career. “I’m just realizing there’s more potential,” he says. But one has to choose his projects wisely. Consider the tragic, cautionary tale of Ed Hardy, a legitimate tattooing legend turned punchline by the line of tattoo T-shirts that bear his name and have inspired allegiance among the cheesy masses (e.g., Jon Gosselin).

“Ed Hardy holds the pink slip to modern tattooing.”says Campbell. “If anyone, he has the right to sell it. I don’t know why he did it, but he signed his name at the bottom of that contract with Christian Audigier and it ruined everything. That’s his legacy now, those f—ing sequin trucker hats.”