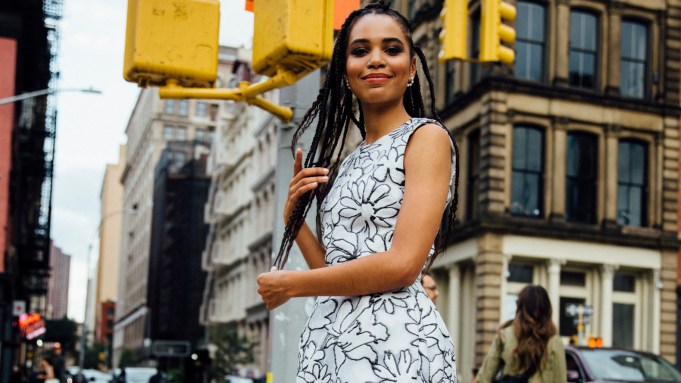 Nesta Cooper has just seen her first fashion show, and, as any seasoned editor can attest, she has a rather perfect sentiment to sum it up:

“It was a bunch of gorgeous people beautifully dressed running around like chickens with their heads cut off,” she says.

Cooper, the 25-year-old actress who will make her big debut this fall in “See,” one of the highly guarded upcoming series from Apple TV+, has come to New York ahead of “See” press to take in shows, starting with Prabal Gurung and ending with Michael Kors.

“I didn’t really know what to expect, but it felt almost like going to a concert,” she says of the Prabal show. “The energy was so crazy. It was really cool to see models in person and up close like that. And I really loved how diverse and body positive his show was. I realized how much of an honor it was to have that be my first show.”

Cooper has always loved getting dressed but never considered herself a fashion person until recently.

“I’ve always loved clothes and dressing myself but I never really felt like it was ‘fashion’ — I never really thought of myself as a part of the fashion world,” she says. “It’s really been something I’ve been getting into in the past year or so. Now I’ve realized it really is just another form of art. If you’re confident and you’re fearless, the fashion world is going to embrace you.”

Cooper was born in Toronto but grew up mostly in Vancouver, where the family moved to be closer to her mom’s family. She started taking acting classes at 14 and got her feet wet by doing dubbing for anime.

“In Vancouver there is a huge industry for dubbing anime,” she says. “And I love anime.”

She moved to L.A. two years ago and was joined earlier this year by her younger sister Sarah, who accompanied her to New York for the NYFW trip. “See,” which will premiere Nov. 1, is a post-apocalyptic drama where a virus wipes out most of the world’s population and the only remaining survivors are blind. Cooper stars in the series, created by Steven Knight and directed by Francis Lawrence, alongside Jason Momoa, Sylvia Hoeks and Hera Hilmar

“As soon as you watch the first episode, you know that it’s a completely different world,” Cooper says.

Her character, Haniwa, is much under wraps, but Cooper describes her as “by far the most complex and interesting and incredible character I’ve ever played. She’s fierce, she’s indigent, she can be a little bratty, and she’s a warrior.”

The show is getting a big press push from Apple, so Cooper is keeping her post-release schedule open. Topping the list is time spent with her new puppy, a mutt she rescued.

“I want to travel also — I spent so much of the first five years of my career just constantly working or being available,” she says. “I went to Europe for the first time this year and this is my third time in New York and, of course, as work comes up I’ll do it but I’m really trying to prioritize experiencing other things and trying to open up my scope of life.”

Megan Thee Stallion Is a Scholar With Dreams of Giving Back