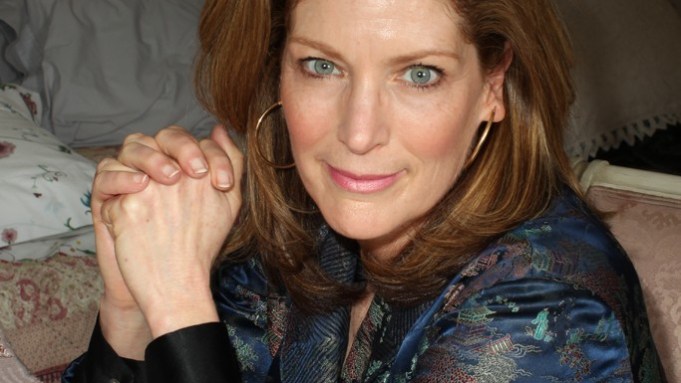 The charming new farce “Don’t Dress for Dinner,” written by the late “Boeing-Boeing” author Marc Camoletti and directed for the Roundabout Theatre Co. by John Tillinger, is scheduled to open at the American Airlines Theatre in Manhattan on Thursday. In the play, set in 1960 in a country house in France, Jacqueline, played by Patricia Kalember, is supposed to be going away to see her mother for the weekend. In her absence, her husband, Bernard, is planning to have his mistress Suzanne over for a Cordon Bleu meal. But Jacqueline learns that their friend Robert, with whom she has been having an affair, is also coming for the weekend, so she decides to stay. Much confusion about who the girlfriend is attached to, and who the Cordon Bleu cook, Suzette, is, follows. The cast also includes Adam James, Jennifer Tilly, Ben Daniels and Spencer Kayden.

Kalember, who has the best wardrobe in the play, and who actually does dress for dinner (in a Balenciaga-like pouf dress), says she’s enjoying the role. It’s one she played earlier during a five-month run in Chicago, when she had “a blast,” she says. “You’re so dependent on each other; what’s great is if you can all get together,” she says. “I’ve noticed in doing this how to contribute to someone else’s laugh. There’s some things with Spencer, little tiny head turns that focus things to help them get a huge laugh.”

Her character, which drives much of the action, is a relatively straight one, unlike Kayden’s role as the cook, which involves a lot of very amusing physical comedy. “She’s got some physical stuff that reminds me of Buster Keaton or another of the old silent comics,” says Kalember, adding, “There’s not one moral person in the play, except maybe the chef at the end.”

Kalember, who at 55 is a beauty who looks at least a decade younger, studied theater at Indiana University and then went into a master’s degree program in the same subject at Temple — which she never finished. She had an opportunity to get her Actor’s Equity card by appearing in small roles in Baltimore Centre Stage’s productions of “Cyrano de Bergerac” and “The Front Page,” but the university wouldn’t let her take two months off to do it. So she left. She started in regional theater, appeared on the soap opera “Loving” and then was cast in the Broadway production of “The Foreigner.” She has since appeared on TV as a series regular on “thirtysomething” and “Sisters,” and in “Sea of Tranquility” at the Atlantic Theater Co., “The Vagina Monologues” at Westside Arts and “Limitless,” “The Company Men,” “Signs” and “Path to War” on-screen.

Kalember has been married for 25 years to British actor Daniel Gerroll, and they have three children. This is an unlikely development for a show-business couple, as she well knows. The couple met cute: He was directing “She Stoops to Conquer” with Nathan Lane at the Roundabout Theatre and needed to cast an actress in the second lead. She auditioned for him and was called back, but didn’t get the part. She got the guy, however. The moment he saw her, he said to his casting director, “That’s the woman I’m going to marry.” She says, “I walked away from that audition seeing us together a year later.” Then he went to see her in “The Foreigner.” “He looked at me, and I looked at him,” she says, and they went off for coffee later and haven’t been apart since.

Since both are actors, and they have children, they usually can’t be performing at the same time. “I really feel we try to be fair,” she says.

As for the differences in acting in the three mediums she has extensively essayed, she says, “I used to think that acting was acting was acting, but now that I’ve done this as long as I have, I think that the truth is the same, but the technique is very different. In film, you don’t have to make your point 300 feet to the back of the house. In film, you try to be as unselfconscious as possible, and give the director as many choices as you can without shaping the material. Onstage, you’re your own editor. Sometimes film actors get onstage and do something different every night, making it hard to shape the play. Television can sometimes be in between film and stage acting. Some of them [TV scripts] are written a little heightened.

“I thought a lot about it, because my husband has been a stage actor for years and years, and he used to say he could never do TV or film, he didn’t know what to do. I used to say to him, ‘It’s the same thing, exactly the same thing.’ But it really is learning a technique.”

She was called to do the role in “Don’t Dress for Dinner” when another actress suddenly had to drop out because of a family problem. This left her only about a week to rehearse. “Thank goodness, I did it before, even though it was years ago,” she says. “I take it all as it comes.”