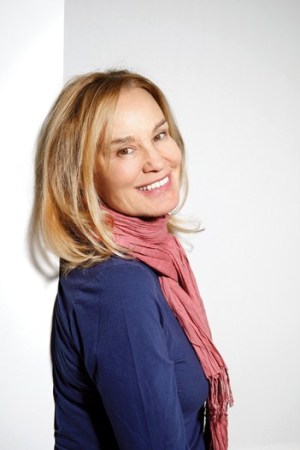 Jessica Lange has spent the last 30 years in front of the camera, appearing in such memorable films as 1982’s Tootsie and the more recent Big Fish. But many might be surprised to learn that the two-time Oscar winner also has spent a great deal of time on the other side of the lens, taking black-and-white photos of her three children and exotic travels with a Leica camera. Now, the notoriously private actress—who declines to discuss details about her marriage to Mikhail Baryshnikov and current, long-term relationship with playwright Sam Shepard—is making some of these pictures public with the publication of her first monograph, 50 Photographs, out in early December from PowerHouse books.

As its title suggests, the tome is a smattering of Lange’s photography over the past 15 years. All are black and white and many of them were taken during family vacations in places such as Mexico, Romania and Finland. But that is the only connection in the series. “People are so theme oriented,” says Lange, 59. “I suppose there are common threads throughout, but nothing hard and fast,” she says.

The fact that an actress as established as Lange, who also has four Golden Globe awards, has produced a photo book is perhaps enough of a draw. “Hopefully, the photos will speak for themselves,” says Lange, who admits her celebrity has helped generate interest in the project. “I suppose there’s a certain curiosity every time someone moves out of their little category,” she says. But the actress insists the recent rash of actors-cum-photographers, such as Brad Pitt, Dennis Hopper and Matthew Modine, had no influence on her decision to publish a book in the first place. “I never thought of myself as a celebrity-photographer, in those terms,” she says.

Certainly, Lange’s foray into photography had nothing to do with Hollywood. She first became interested in the subject 20 years ago as a collector amassing prints of favorite shutterbugs like Josef Kudelka, Manuel Bravo and Walker Evans. “It got to a point where every square inch of the walls of my house was covered,” recalls Lange, whose only formal training in photography was an introductory class in college. “That was kind of the beginning of a fascination,” she explains.

From there, Lange began to take pictures of her three children. (Her eldest daughter, Alexandra, was fathered by Baryshnikov, while younger daughter Hannah and son Walker are by Shepard.) Her fascination with shooting them in black-and-white instead of color snapshots opened the door to the more artistic photos showcased in 50 Photographs. “I decided that, after all these years of photographing my children, I should put these pictures in an album just for the family. So a friend put me in touch with this designer who helped me lay it out,” recalls Lange. “I showed him my other photographs [of my travels] and he said, ‘Let’s do a book.’ And it kind of just came from there.”

The process of enlisting family friend and rock icon Patti Smith to write the book’s introduction was just as fortuitous. After showing Smith her photos at dinner one night, Lange recalls: “I really loved the way she responded.” Years later, when she called Smith about writing a forward, the task was already done. “She said, ‘I already wrote something about your work. I had hoped that if you ever published something, you’d ask me to write the forward,’” says Lange.

What wasn’t as fortuitous was all those years Lange has spent at photo shoots, as a subject. “Those pictures are always posed. I’m not involved in that way of shooting at all,” she says. “The way I like to photograph is very anonymously. I like to be a fly on the wall and not engage the subject.”

And that is what Lange likes best about the art. “It’s an antidote for acting. It is very solitary and acting is so collaborative. You’re always working on someone else’s schedule [with acting]. The great thing about photo is that you’re doing it all on your own.”

That’s not to say that Lange has designs on leaving acting anytime soon. “Photography is not my livelihood. I do it for myself. Acting is what I’ve been doing for 30 years; it’s what I know how to do.”

Lange is back to doing just that in Grey Gardens, the upcoming picture in which she stars opposite Drew Barrymore. “It was a great acting experience,” says Lange, “I haven’t had one of those in over a decade.”