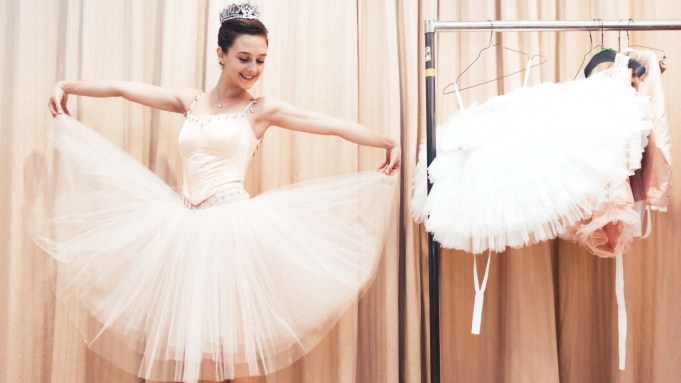 With critically acclaimed appearances in works by George Balanchine, Christopher Wheeldon and August Bournonville, the petite star has charted a meteoric rise since joining the company as an apprentice in 2009. She climbed to soloist in 2013 and was promoted to principal this past June – just six years into her professional career — by ballet-master-in-chief Peter Martins.

In the past year, NYCB’s principal roster has considerably narrowed, losing marquee names Jenifer Ringer, Jennie Somogyi, Janie Taylor, and the prolific Wendy Whelan. Though four female étoiles down, Martins chose to install just one in their place: Lovette.

At the time of her promotion, the California native was actively injured. Only two weeks prior, she had undergone surgery that saw her having an invasive bone — which had detached itself from her foot and was painfully floating in her ankle — removed.

Called back to Lincoln Center while recovering in Connecticut, Lovette said she met with Martins backstage, who casually “slapped me on the back and said ‘Congratulations, I’m promoting you — you’re not surprised.’”

“He told me to go get a drink on him but he didn’t give me any money, so that was funny,” she recalled by phone, breathlessly walking up the six flights of stairs to her apartment, post multiple rehearsals.

This holiday season — following a six-month hiatus — Lovette will return to the theater to unveil her rank in the classic 1954 production of Balanchine’s ‘The Nutcracker,’ for which she will don the gossamer tutus of the Sugarplum Fairy.

Lovette called her new position “validating,” and feels invigorated by the gravitas and artistic freedoms that principals are allowed to flex.

Most dancers in the company, Lovette included, uniformly hone their techniques in the Balanchine style at the NYCB-affiliated School of American Ballet. It’s when they hit the role of principal that dancers’ individual stage personas are valued over synchronicity.

“I have a new confidence in my dancing — I can really do my own way. There’s not a right way or a wrong way, I can just do Lauren. That’s what principal dancers do: Crawl forward a path. I like that openness of the situation,” she said.

Lovette’s fellow city ballet principals have become world-renowned for such individual strengths. Sara Mearns for her deep-reaching emotion, Sterling Hyltin for plucky precision and Tiler Peck for her agile musicality.

Lovette’s own tenor, by contrast, is seemingly derived from her off-stage persona. Known by colleagues for her constant smiling presence, gracious demeanor and enthusiastic spirit — Lovette’s style could be summed up as effervescent.

Her first principal appearance for the company came in January 2011 in Wheeldon’s “Polyphonia” — a linear, precise contemporary work. But it’s high-octane, energetic roles in which her exuberance shines.

The spring 2015 season was Lovette’s strongest string of casting yet: she nabbed the role of Juliet in “Romeo and Juliet,” the Sylph in “La Sylphide” and a featured role in the Bournonville Divertissements that saw her rapping on her tambourine prop so hard that its percussion echoed throughout all four rings of the theater.

“Connecting with the audience is my favorite part about dancing. It’s important to feel like they’re with me. I feel like that’s why people come to the ballet. They don’t come to see triple pirouettes, they come to feel something,” she said.

In 2014, she was handpicked by French multimedia artist J.R. to star in his choreographic debut “Les Bosquets,” for which Lovette danced alongside hip-hop sensation Lil’ Buck. Lovette and J.R. continue a collaborative relationship. This past summer she became some of the city’s finest Instagram bait when he wheat-pasted a five-story high image of her likeness to the side of a TriBeCa building.

Now, having gained more than one-and-a-half inches of additional flection in her left foot following surgery, Lovette hopes to “be on the same level of principal dancers around the world. I want to build a world standard of consistency.”

Lovette first danced the role of Sugarplum Fairy in 2012, but this will be her first season doing so as principal. Though sometimes bemoaned by ballerinas for its sheer repetition and seemingly never-ending run (five weeks of straight performances), Lovette feels a special connection to “The Nutcracker” repertoire.

“Surgarplum Fairy is one of those roles that I looked at as a little girl and said, ‘If I ever get there, that will be something,” she said.

“The Nutcracker” is a boon for ballet companies worldwide. The New York City Ballet owes 45 percent of its annual ticket sales to the show’s holiday season run.

NYCB costume director Marc Happel is responsible for the creation of the hundreds of costumes needed for “The Nutcracker” season. Its costumes were originally designed by close Balanchine collaborator, Karinska, in 1954.

Per its needs, the company’s present costume shop dutifully replicates her designs each year — creating something of a Santa’s Workshop-type environment in the Lincoln Center sewing room.

“I think that because it’s our big cash cow, if you will, we want to make sure it looks good. If it looks like it’s looked for decades, then I’ve done my job – there is a certain amount of pressure behind that,” Happel said.

At NYCB, the Sugarplum Fairy character wears two tutus in the course of a performance – a perky mint green costume for her pas de deux with the cavalier, and a frothy pink classic tutu for her solo.

For “The Nutcracker”’s run, NYCB has 12 to 14 Sugarplums in its casting rotation, meaning Happel and his team construct 30 Surgarplum costumes that require between 40 and 60 hours of labor each to create. This is in addition to the costumes for the other 90 or so dancers participating in each performance.

They will be seen by some 100,000 spectators — many of whom are children viewing live ballet for the first time.

For Lovette, who cried the first time she stepped into a Sugarplum tutu, “The Nutcracker” “is a reminder of my dreams as a child – you have to hold onto that, or else why live? It’s a special role, I am happy to be coming home to it.”