By Misty White Sidell on May 4, 2016
View Slideshow 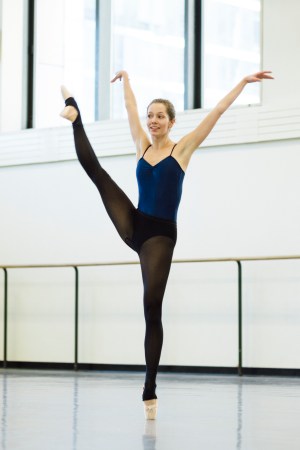 New York City Ballet corps dancer Unity Phelan will get her big break tonight. The lithesome 21-year-old has been hand-chosen for a principal role in Christopher Wheeldon’s new ballet “American Rhapsody” — a triumphant casting for a dancer of her rank. The piece, which premieres at the company’s spring gala, is set to George Gershwin’s jazzy, momentous overture “Rhapsody in Blue.” It will see Phelan partnered with lauded male principal Amar Ramasar, dancing alongside New York darlings, the husband-and-wife team of Robbie Fairchild and Tiler Peck.

The ballet marks the first time that Phelan, a dancer who has been gaining significant on-stage momentum since the company’s winter season, has had a principal role choreographed for her at NYCB.

“I have always loved [Christopher’s] ballets, but I had never thought I would be picked to be a principal in one of them — that’s not something that ever crossed my mind,” Phelan, who joined the company as an apprentice in 2012, said of her fortuitous position.

Wheeldon, NYCB’s former resident choreographer, has since gone on to become something of a rock star in the dance world. The 43-year-old was named an Officer of the British Empire in January. Last year’s Broadway production of “An American in Paris,” which Wheeldon conceived and directed, won him a Tony for best choreography.

For “American Rhapsody,” his first original piece for NYCB’s repertoire in four years, the choreographer has remained in the Gershwin mood — setting the ballet’s rapid tempo to a score that will be well-known to American audiences; it is frequently featured in United Airlines commercials.

Phelan has found herself at an interesting time in the company’s history. Its Ballet Master Peter Martins has recently begun incubating new talent by casting a score of corps members in highly prized roles: Her fellow dancers Indiana Woodward, Claire Kretzschmar and Miriam Miller’s careers are also on the rapid ascent.

Despite this, the dancer said she is utterly confused by Wheeldon’s casting; seemingly forgetting the fact that this past winter season saw her debut in seven principal roles — including that of the Sugarplum Fairy in “The Nutcracker” and Jerome Robbins’ “Glass Pieces.”

Wheeldon feels that Phelan shouldn’t be all that surprised by his decision: “I actually saw her dance the part of the wild horse [in my ballet] ‘Estancia’ last season. I had been away from the company for a while and was just astonished by this beautiful new girl with phenomenal energy.

“She has incredible leg and footwork, and a great attack — she is very petite and very beautiful, she looks like she would be porcelain until she starts to dance and shows this wild energy.”

While Wheeldon has worked with Ramasar, Peck and Fairchild numerous times (he attended the latter two’s wedding and cast Fairchild as the lead in “An American in Paris,” a role that earned him a Tony nomination), the Englishman hadn’t yet established a choreographic process with Phelan — creating an interesting dichotomy among the cast.

In observing an early rehearsal of the piece, Phelan — a Princeton, N.J., native who moved to New York at age 14 to attend NYCB-affiliated School of American Ballet — appeared rattled. As she leaps alongside Ramasar, her nerves spike. Her Cavalier King Charles Spaniel Pippin — who accompanies her to most rehearsals — begins to whimper for attention, leaving her even more skittish.

“I was terrified, pure terror,” Phelan said of her first rehearsal for the piece. “I was so nervous it took me 15 minutes to pick up any steps. I feel so out of place and honored at the same time.”

“I’m very demanding and push my dancers to discover qualities in themselves. The process has probably been quite hard for her,” Wheeldon said.

The following week, Phelan appeared more relaxed at the company’s in-house costume atelier, where she and Pippin meet Janie Taylor — a former NYCB principal designing the wardrobe for “American Rhapsody” — for a fitting. For “American Rhapsody,” Taylor has created a sleek set of jewel tone satin-and-mesh long-sleeved bodices that subtly pannier at the hips. A contrast-colored pleated miniskirt is layered underneath. Said Phelan: “It makes me feel like a little sass machine.”

Taylor has long had an affinity for fashion. Since retiring from her principal post in 2014, the self-taught designer has created costumes for myriad choreographers, including Justin Peck. Wheeldon recently enlisted her to assist in the curation of the exhibit “Fashion Foward” at Les Arts Décoratifs, for which he served as artistic director.

For Phelan, Taylor’s involvement in the ballet’s costuming process is symbolic. This past winter, she wore Taylor’s old Sugarplum Fairy tutu for her “Nutcracker” debut.

“I wrote her an e-mail to let her know and she sent me back a long message with so much advice — it felt like a pass of the baton,” Phelan said earnestly.