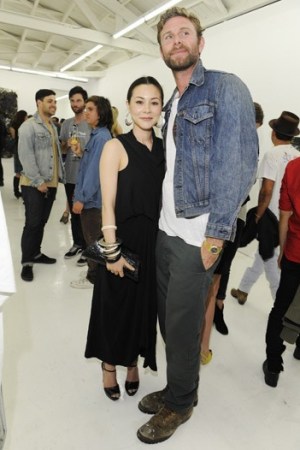 The OHWOW Gallery in Los Angeles was full of that friendly feeling Thursday night during the opening of Post 9-11, a group exhibition showcasing nine New York artists and friends, including Dan Colen, Ryan McGinley, Adam McEwen, Nate Lowman and Hanna Liden. Gallery owner Al Moran explained the exhibition’s title meant “nine artists working in 2011” as much as an allusion to the 9/11 attacks. The concept behind the exhibit, Moran said, was to feature artists who worked, played and lived together. “It started off with a list of 30 or 40 names, and we whittled it down to the core crew that really had relationships with each other,” he said.

China Chow praised the team effort: “It’s wonderful that they are in a group… It’s their lives. They collaborate together, and it just makes sense.”

McGinley and Colen are so tight that one piece, a Polaroid image called “Dan’s Paintings Are OK” of McGinley and Ed Ruscha, is an inside joke. It was taken at a New York gallery opening that Colen attended in order to meet Ruscha.

“Ed Ruscha is my biggest hero, and I’ve always had a huge crush on him,” said Colen. “I went there, and I just stared at him for an hour.”

McGinley, on the other hand, didn’t hesitate to ask the famous artist to pose for a picture, which he pinned above Colen’s bed after Colen had slinked back home without even an introduction. Since the night his Ruscha crush went unrequited, Colen said, “I’ve met him and professed my love.”