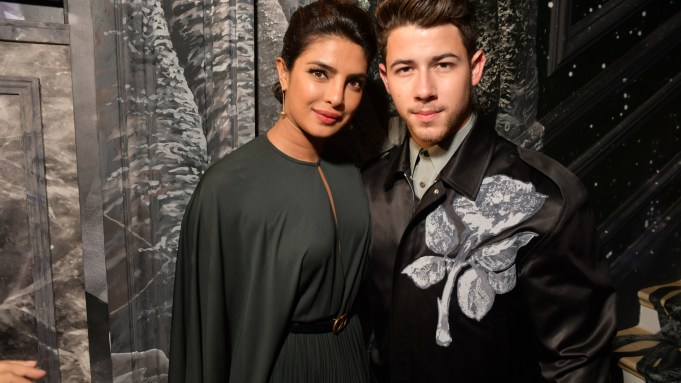 BONJOUR, PARIS: There was quite a commotion outside Dior’s historical headquarters located on the Avenue Montaigne in Paris on Monday.

Legions of fans were waiting for an appearance by Nick Jonas and Priyanka Chopra, who had arrived in France earlier in June for the wedding of Jonas’ brother Joe to Sophie Turner, which was held in the South of France on June 29.

They finally arrived — 40 minutes after the show was set to start — swooping into their seats next to “Wonder Woman” actress Gal Gadot, herself chatting with future Marvel star Adria Arjona.

“The show set is really beautiful. I feel like I’m underneath something, or floating above something,” she said of the dark walls and mysterious paintings all around the venue, lending the Dior headquarters an eerie feel.

Arjona, a 27-year-old half Guatemalan, half Puerto Rican actress, has just wrapped filming “Morbius,” based on the Marvel Comics character, in which she stars alongside Jared Leto and Matt Smith.

“Every day they just kept challenging and challenging me,” said Arjona about working with the two actors. “It’s really beautiful to work with someone who always pushes your buttons and isn’t afraid to do so, because it gives me the liberty to do the same thing to them — to challenge them as a woman.”

Past “The Handmaid’s Tale” actress Elisabeth Moss — who was making fun of the Parisian heat wave, saying that it’s “the equivalent of a regular month of August for New Yorkers” — and sitting next to “Stranger Things” newcomer (and daughter of Uma Thurman and Ethan Hawke) Maya Hawke, Shailene Woodley was overjoyed at being in such a historical setting.

“I’m such a fan of ancestry and origin and honoring what came before us,” said the “Big Little Lies” star, who was spotted at Parisian restaurant Lapérouse last week in honor of Zoë Kravitz and Karl Glusman’s nuptials, alongside fellow co-stars Nicole Kidman, Reese Witherspoon and Laura Dern.

“So to be in the building where everything was created and started, I can’t help but feel that for every single person that has ever been affected by Dior — whether it’s the consumers, the audience, the ateliers, the designers, the delivery people — it all began here,” she continued. “The fact that the house is choosing to honor where they came from is very impactful to me.”

Sitting opposite Bianca Jagger, Nigerian author Chimamanda Ngozi Adichie — whose seminal “We Should All Be Feminists” pamphlet inspired a sell-out Dior T-shirt — was glowing with pride.

“I think the French government has made a very good choice,” she said of the decision to give Dior creative director Maria Grazia Chiuri the Legion of Honor. “Maria Grazia is a friend, and a woman I really respect. I think she shows courage and that she’s the real deal, to put it in very basic terms.”