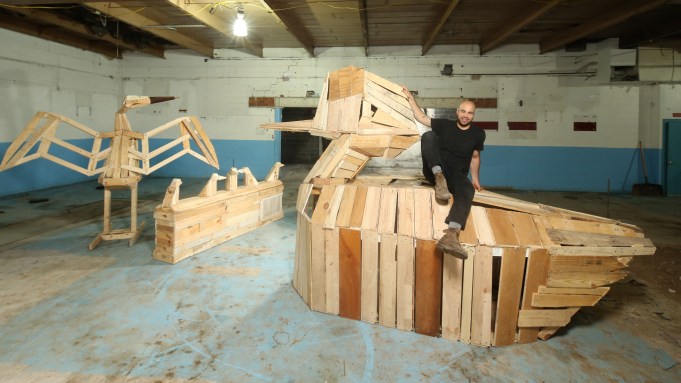 By the time he’d turned 18, John James Audubon knew he wanted to be an artist, and he’d nailed down both a subject of interest and a lofty goal: the content of his artworks would be birds, and he would endeavor to paint and describe every bird species in the U.S. He didn’t ultimately reach that goal, but his 435 life-size renderings assembled in the tome “The Birds of America” has placed Audubon squarely in the annals of history as a legendary artist and environmentalist. He didn’t start out with such a distinction, though — he experienced some hard times establishing himself as a respected painter. He was forced to embellish his image, and he claimed he’d studied with the famed Neoclassical artist Jacques-Louis David — he hadn’t.

In 2018, the standards aren’t the same; one doesn’t necessarily need a stamp of approval or a bourgeoisie standing to make it. Nicolas Holiber, whose public art installation “Birds on Broadway” will occupy the streets of upper Manhattan from 64th to 166th Streets come April 2019, is an artist like Audubon was — but that’s where the similarities end. Holiber doesn’t boast a big birding background, and he keeps a low profile. He works either alone or with an assistant from the depths of a deserted former bingo hall in the Brooklyn neighborhood of Flatbush that he’s converted into a sprawling studio, which will house the 12 birds to be featured in the installation.

The bird lineup includes a wood duck, double-crested cormorant, two woodpeckers and some scarlet tanagers perched on a block, and all of them are either native to or fly through New York City. These birds also share in common being threatened in some way by climate change, whether through habitat or food source loss, or shorter seasons. In addition to New York City Audubon, the Broadway Mall Association and NYC Parks, Holiber is working in tandem with art dealer Avi Gitler, who is the owner of Gitler & ___ gallery and organized the ongoing sister project to “Birds on Broadway” nearly four years ago, called the Audubon Mural Project.

Gitler goes way back with Holiber.

“I was a big fan of Nic’s work,” Gitler says. “I ended up presenting him in his first solo show in my gallery in 2016. When we were thinking about what we wanted to present on Broadway, we knew we wanted an artist whose interests and whose work intersected our own interests.”

Among those interests is a need for this project to be environmentally sustainable, and Holiber agreed to use only reclaimed wood for the bird sculptures. The wood, donated to the artist by an organization called Big Reuse, is piled into neat rows inside his studio, which looks more like an abandoned warehouse from a horror movie than anything else. Metal beams and padding on the ceiling are exposed everywhere, along with broken brick on the walls. Metal strips hang from the beams and blue chips of paint are kicked up all over the floor. Holiber is in the first stage of constructing the artwork, which is building the skeletons of the sculptures. After he builds the framework, he’ll get into phase two, which he describes as the “more creative and fun” part of the process: making the feathers.

“I’ll split all the wood into irregular pieces and shapes, paint the pieces by hand and screw them into the wood structure,” he says. “It’s like a giant 3-D puzzle that I get to put together.”

As part of the installation, the wood will not be treated to be weatherproof. Holiber wants to see what effect the environment will naturally have on the sculptures themselves. “There will be some amount of surface weathering, and certainly the wood is going to change over time,” he says. “People will be able to see that kind of effect — maybe the paint will fade a little bit, maybe the wood will start shifting in some places.”

The installation will exist in upper Manhattan until fall 2019. From there, Gitler is hoping to “have the birds migrate south,” as he puts it.

“We’re seeking out the right partners in the American South,” he says, adding that he’s met with potential institutional partners, some museums and civic leaders. “I love the idea of the birds going to New Orleans, because Audubon lived there, and New Orleans, in particular, is a place that’s threatened by rising sea levels and changes in climate. It’s also a migratory route for the birds.”

But the installations, like the species that Audubon once sketched which are now under threat by human excess, are ephemeral. After two moves, the displays will be over.

“It’s just a matter of finding the right place for them to go,” Gitler says of the sculptures.

Duran Duran, the Eighties in the Spotlight at Bulgari Event

Have We Reached Peak Pool Float Yet?