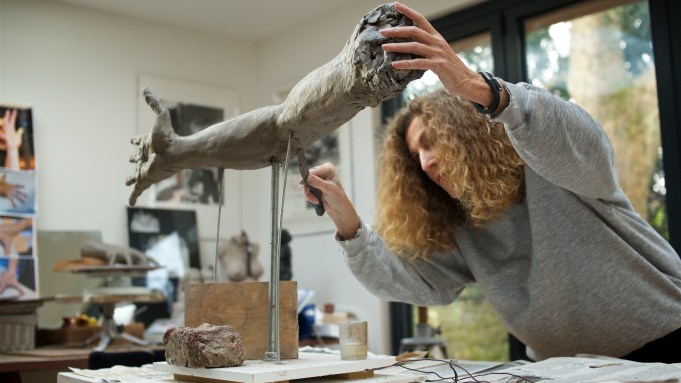 “After the study of portraiture, which was the subject of my first show, I started looking at hands,” Farhi said. “They are actually even more revealing than the face. My friend Abby Hignell gave me a wonderful book called “Rodin, les mains, les chirurgiens.” It is a fascinating book in which surgeons and art historians study Rodin’s sculptures of hands.”

“Rodin very often modeled the hands, isolating them from the body,” added Farhi. “It is only once that he found the right expression that he readjusted them to the whole figure. For my part, I decided to show only the impact of the gesture stripped of any context. My hands are creative, working hands.”

One of Farhi’s favorite pieces from her exhibit is an arm she sculpted of Ed Watson, an English dancer and principal of the Royal Ballet. “I loved trying to express the energy, the power of his arm outstretched, the taut muscles and the sense of reach.” she said.

This is Farhi’s second solo exhibition. The designer, who said farewell to the fashion business and became a sculptor, was tutored and mentored by Paolozzi. She staged her first showcase in 2014 which included busts of Dame Judi Dench, Helena Bonham Carter, Tom Stoppard, Anna Wintour, Lucian Freud, Francis Bacon and Paolozzi.

“The sculpting process is demanding because so many elements are involved,” Farhi previously told WWD. “You have to create a work of art which can be viewed from so many different angles, and you have to feel it works from each. What’s more, the practical side, the delivery of the final object, involves so many different skills, from the first conception right through to the foundry, that you’re aware the slightest mistake at any stage can mar the final result. It’s nerve-racking, but satisfying when you correct your worst errors.”

The exhibit will run from Sept. 13 to Sept. 30 at Bowman Sculpture.