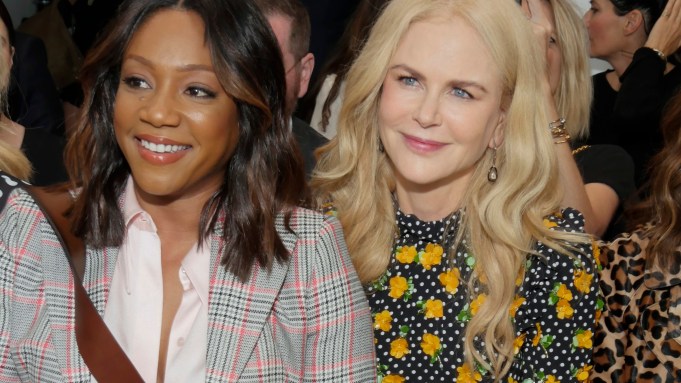 The guests at Michael Kors’ runway show in New York Wednesday morning found their seats through a winding maze of art pieces that were installed sporadically inside a giant space in the city’s Seaport District.

Two of those attendees were Catherine Zeta-Jones and her daughter Carys Zeta-Douglas, who were guided to their spots by a pack of publicists. This is the only fashion show they’ll be attending this NYFW, they said, and Carys responded to some chatter that’s been going around about her potentially working in fashion in the near future.

“I have time, I’m still young,” the 15-year-old said. “I’m going to see how I feel and see where it goes. But I definitely love fashion.”

“She’s also a wonderful young actress, pianist and singer and songwriter,” Zeta-Jones Douglas piped up. “Now’s the time for her to have her fun.”

Down the line, Cynthia Erivo showed off her inches-long acrylic nails that were painted silver with embellishments.

“They’re by a nail designer named Gina,” she explained. “She does my nails every time. She comes to my house to do them for me. She’s a real artist.”

Erivo came to New York quickly for fashion week, as many other celebrities have done this year. She said she’ll do one or two more shows, then it’s back to Los Angeles for the “Bad Times at the El Royale” premiere.

When Rose Byrne arrived, the photographers called out to her — she took a deep breath before posing for pictures.

Nicole Kidman, in a black dress with yellow flower appliqués, sat next to Iman. Suddenly, a whirlwind of Tiffany Haddish’s signature energy blasted through as the comedian and actress herself ran forward, saying, “What’s up!?” After she was urged to join the others sitting in the front row, Haddish squeezed into place, forcing the rest of those seated to scoot down.

“It’s a lot of ass!” Haddish screamed, cackling, to Iman.