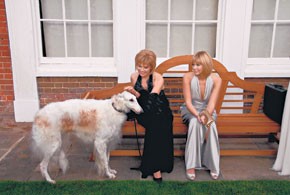 “I got three kisses off her, how many d’you get?” inquired Benicio del Toro of a fellow guest after receiving a continental welcome from Petra Nemcova as he arrived at the Raisa Gorbachev Foundation Gala, held Saturday night at The Stud House in Hampton Court Palace, just outside London.

Mikhail Gorbachev, along with his daughter, Irina, granddaughter Anastasia Virganskaya, and Alexandre and Evgeny Lebedev, played hosts for the evening. Naturally there was a suitably Russian flavor to the party — borzoi dogs stalked the manicured lawns and soldiers dressed as the Nutcracker prince waved guests into the grounds. Joan Collins even carried along a golden Judith Leiber clutch bag in the shape of a jeweled Fabergé egg, “in honor of the evening,” she said. But the “Russian Midsummer Fantasy” theme aside, some guests were simply bowled over by the palace’s past.

“Have you seen the kitchens here?” asked Westwood, referring to the palace’s Tudor kitchens, where staff once cooked for Henry VIII. “It really shows you the scale of the operation.”

After the auction, Mary J Blige covered a few U2 numbers in honor of fellow guest Bono, before London DJs Basement Jaxx took to the decks.