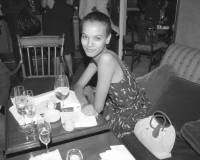 “Look, I have my own nightclub,” boasted Donna Karan, who turned her London store moody Monday night, then invited Deborah Harry to sing. Guests included Luella Bartley, Matthew Williamson, Trudie Styler, Nick Rhodes, Bianca Jagger and Chelsea Clinton, with boyfriend Ian Klaus in tow, though Clinton insisted she has no ‘It’ girl ambitions.

“I know, I know. It looks like I go out a lot at night, but I really don’t. I actually go to school five days a week, and I’m doing really well, too,” she said. (As if there was any doubt).

Back in New York, it was ballet — not jazz — that lured a crowd to Phillips de Pury & Luxembourg, where Louise MacBain and Charlotte Moss hosted a party in honor of the New York City Ballet. Among the guests transfixed by the Impressionist and Modern Art collection on the walls were Anne Bass, Joy Henderiks, Candace Bushnell and Peter Martins.

“I had to have a glass of champagne just to stand in front of this Miro,” swooned Darci Kistler.

“Gisele, you can interrupt me anytime,” Brennan said with a wink.

Vroom, vroom. Move over Segway HT — Manhattan’s first Vespa boutique opens tomorrow, just in time for holiday wish lists. Located at 13 Crosby Street, the 1,800-square-foot store houses scooters in nine colors, a full service and repair department and wash stall, plus accessories like helmets, custom kits, clothing and travel bags. “New York is the most European of American cities, so we thought, ‘why not?’” says Wen Schieffelin, who owns the shop with her husband, Zach. Two models are available, the ET2 ($2,980) which tops out at 40 mph, and the ET4 ($3,980), which goes up to 65 mph. “You could take it on the FDR,” says Wen, “if you have a motorcycle license.” So far, they’ve sold 12 through private appointments and persistent passers-by. Joel Coen dropped by unexpectedly with his wife, Frances McDormand, and picked up a silver Vespa (the most popular color). And Wen hopes Lenny Kravitz will do the same. “He lives up the street,” she notes.