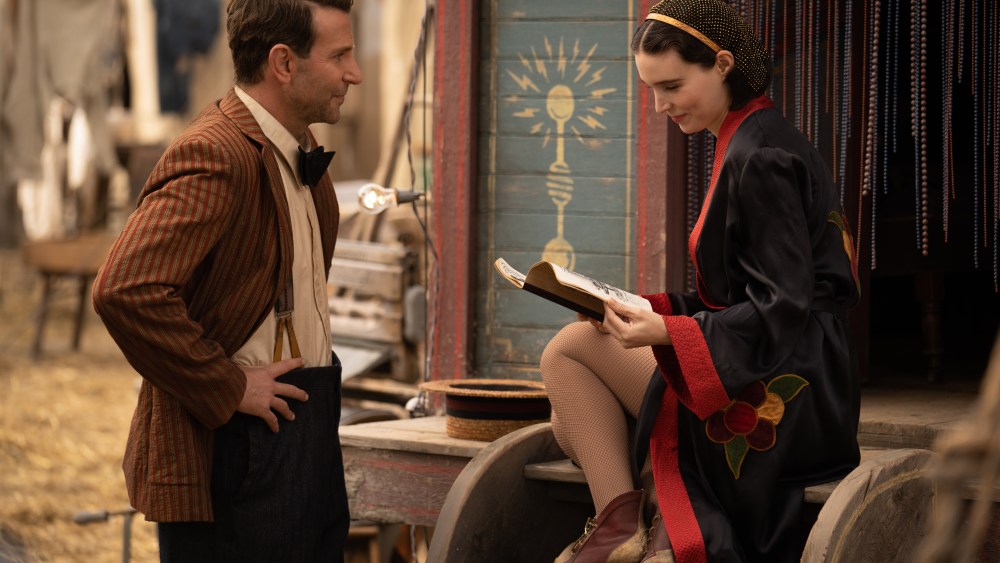 Sequeira has worked with Del Toro several times, most recently on “Shape of Water,” which earned him an Oscar nomination for best costume design. The director approached the designer in 2018 about working on “Nightmare Alley,”  which also stars Rooney Mara, with supporting performances from Willem Dafoe, Cate Blanchett, Toni Colette and Richard Jenkins. While Sequeira had seen the original 1947 version of film, Del Toro noted that he wasn’t aiming to remake the film — the aim was same story, different storyteller.

“What’s great about working with Guillermo is that there’s an understood dialogue by virtue of working together repeatedly. And there’s a synergy in the aesthetic and knowing how he wants to light it, knowing his level of desire for attention to detail,” says Sequeira, who’s at work on another project with Del Toro, the anthology series “Cabinet of Curiosities” for Netflix.

Sequeira’s process for “Nightmare Alley” began with photo research of the distinct time periods depicted in the film. “I really wanted to isolate the difference between an early-’30s to mid-’30s suit, a late-’30s suit, and every aspect of clothing to really understand the placement of the movie,” he says. “Because when we look back now, you can muddle many periods together. It gets tricky. But I wanted to be really precise.”

He originally looked into rental houses in Los Angeles, but those in line with the period of “Nightmare Alley” were completely loaned out to other films in production. “Our early pivot was to look toward Europe,” he says, adding that he ended up traveling to Italy, Spain, Paris and London to source fabric swatches, buy jewelry and visit flea and vintage markets. “I like to bring together a collection of beautiful things that I want to see in a film, whether it’s a piece of jewelry or it’s fabric to make a suit. And that really brought together the look [of the film].”

Sequeira notes that the movie was challenging in that there were two distinct sartorial environments: the seedy carnival world, and high-society show world of Chicago. “The carnival world was really harking back to post-depression. These were areas in which people did not have a lot of money, and thus were not of the latest fashion and their clothing was old,” he says. “And then in the city, even though it was two years later, the city was all about being on the edge of fashion for 1941. And that again was really studying what was ’41 — not ’45, not 1938 — but really what was on the cusp at ’41,” he adds. “Because we have characters that had money and were very in-touch style-wise.”

Most of the costumes in the film were created custom, and weathered to reflect a vintage and worn-in feel for the carnival scenes. Sequeira and his team built all the leathers, the shearlings, hats and shoes. “If it looked old, it was made old,” he says. The costume team contrasted the worn-in and textured look of the carnival with lush fabrics — velvet, satin and silk — for the city scenes in the second half of the film.

He also used costumes to highlight nuances in character relationships. The main character, Stanton (Cooper), heads to the city with his love and assistant in tow, leaving his carnival life completely behind — reflected through his new wardrobe of fitted suits, referencing the New Look. In contrast, Molly (portrayed by Mara) retains a bridge between the two worlds and continues to wear old pieces — a cardigan, skirt — from her time at the carnival. Her new performance looks, chosen by Stanton, highlight his manipulation of her new life in the city.

Other notable female characters in the film include the carnival mystic Zeena (Colette) and glamorous and calculating Chicago psychologist Lilith (Blanchett). Sequeira reflects each character through deliberate silhouette and color choices — reds for Molly, greens for Zeena and cool tones for Lilith. “They each were powerful women in their own way. Ultimately, Molly at the end found her power. The character of Zeena had her heyday in the past, and thus there was a sense of some powerful pieces from the ’20s that I used to evoke the high society time from the past,” says Sequeira. “Then with [Lilith], it was the femme fatale. I really wanted to pick up on fabrics that gave us a film noir feeling with some sheen and texture.”

While the range of characters and settings was the challenge of the film, it also was ultimately the reward.

“What was great about this movie was the spectrum,” says Sequeira, calling out several favorite outfits from the film: Zeena’s carnival performance look, Molly’s moth performance dress, an off-the-shoulder dress for Lilith. “When one is designing and able to jump from a shoddy old performance outfit to a high-end, haute couture suit, each of those brings different elements of calling it a ‘favorite.’”