Tony winner Nikki M. James turns to television in CBS' newest series, "BrainDead," from the creators of "The Good Wife." 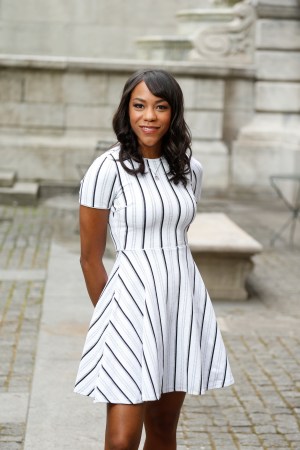 “Obviously there is CGI, so we just see little dots on the floor,” says Nikki M. James, perched on a bench in a quiet corner of Bryant Park. She’s reflecting on the special effects in her new show “BrainDead,” which premiered on CBS last month, and recounting the behind-the-scenes reveal of what those little dots look like to audiences: creepy, crawly bugs. “The first time I actually saw the show I was like ‘that is terrifying,’” she says. “This is so gross!”

“BrainDead” is an unlikely plot for any programming, and is even more surprising for a big network like CBS. “You won’t believe this is on network television,” James says. The show is the creation of Emmy-nominated showrunners Robert and Michelle King, and is their first follow-up to “The Good Wife,” which aired its final episode this spring. “BrainDead” is set in Washington, D.C., and combines political drama with comedic sci-fi mystery — a premise which, James says, is initially as strange as it sounds. “Even now having shot 10 episodes, I find myself at a loss of words trying to describe it,” she says. “It doesn’t fit into one genre.”

James grew up in Livingston, N.J., “one town away from Anne Hathaway,” and has been pursuing acting in New York since she enrolled at New York University in 1999. Though she’s been making a name for herself as a television actor, the stage is where the majority of her career unfolded. “The first time I sang in front of people was at my kindergarten graduation — I sang Whitney Houston’s ‘Greatest Love of All,” she recalls. “That same year I saw my first Broadway musical, which was ‘Cats,’ and I fell in love with singing.”

The actress made her Broadway debut in 2001 while still in college, in “The Adventures of Tom Sawyer,” and she worked steadily on stage and in bit parts for TV until a little show called “Book of Mormon” came along, for which she won a Tony in 2011. She later left “Mormon” for “Les Misérables,” but after a year was ready for a new challenge. “I was exhausted, and I said, ‘I think I’m finally ready to give this other world a shot,’” she says of her move to television.

Her auditions for the Kings landed her a recurring role on the final season of “The Good Wife,” and also a part in “BrainDead,” the mysterious new series they were developing. “They called it ‘The West Wing’ meets ‘Invasion of the Body Snatchers,’” she says of the audition. “I think Robert and Michelle King are two of the smartest showrunners on television. It’s their commitment to both the romance of television, but also they’re not afraid to be really intelligent in their writing. So I just thought there’s no reason why you wouldn’t want to do this.”

Understanding her character, Rochelle, came easily. “The first scene that I read, which doesn’t actually appear in the show, it’s my character describing her relationship with her father who passed away in the first episode,” James says. “And I lost my dad when I was 17 and I think maybe it was something about that but I immediately felt like I knew who she was. I didn’t have to work hard to find who she was.”

The series has already drawn a following for its “wacky” plot line and highly addictive, mystery-driven genre. “My friends and family and people who tweet me are really curious to try and solve the mystery, and that’s where my character comes in,” James says. “There’s a political aspect of it and then there’s this sci-fi mystery.”

There is also the added pressure of being a show about American politics set during election season. “I think the Kings are being smart about how they handle it,” she says of the show’s timing against the current political landscape. “Ultimately it’s about politics, but it’s not — it feels from my perspective — and I don’t spend all day watching MSNBC or anything — but my sense is that everyone is so entrenched in their sides that almost nothing can happen. And in a nation that was built on innovation, it just feels like everyone is cowering in their own corners.”

And much like “The Good Wife,” the script doesn’t shy away from the issues said politicians are after. “The Kings are willing to skewer both sides,” James says. “It isn’t a Republican or Democratic thing — everyone is interested in their own point of view more than they are in actually trying to find middle ground. It feels as though what we have here is a failure to communicate. And that is essentially the basis of the [‘BrainDead’] story, what happens when people no longer communicate, and why it happened. In our world it’s because of bugs — space bugs.”