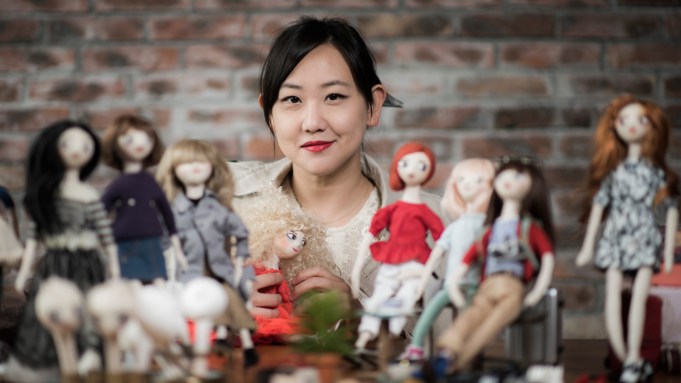 HONG KONG — As her Easter break was winding down in March 2015, Ning Lau was preparing to return to the grind of running her own business, a digital platform that brings together designers and creative types.

“I was too busy at work and felt very stressed,” said Lau, the former vice president of marketing and creative at Joyce. “I started to think I needed something to de-stress myself and get a good balance of life.”

An avid doll collector, she decided to try her hand at making her first doll. Lau used a wooden clothespin for the torso, stitched together a body from cotton shirt fabric and stuffed it with cotton to give it its form. She stayed up until 5 a.m. on the last day of her vacation to finish off the doll, which she named Lisa. There was just one minor problem, she recalled: “I used the wrong clay so the head [was] too heavy.”

That issue resolved itself in her subsequent attempts — she switched to a lighter-weight type of clay. Since then, she has crafted more than 50 dolls and managed to snag a series of fashion-themed collaborations that has seen her little gals don miniature versions of Comme des Garçons and front for Shu Uemura. A selection of her dolls is currently on display at The Peak Galleria Mall here through April 10.

“I didn’t really realize that people [would] like my dolls as much as me,” said Lau, 39, who has collected dolls since she was a child. Her favorites include the Lenci range-Italian dolls made of pressed woolen felt — and Bradley dolls with their frilly dresses and large doelike eyes.

Lau, who cofounded Store magazine before heading to Joyce, said she grew tired of the fashion industry’s rat race at a certain point and decided it was time to follow other creative pursuits. In 2013, she created “who-are-invited.com,” a digital platform for creatives. The site invites a small group of people (say, a chef, a dancer and a film director) to engage in an offbeat activity like flower arranging, horseback riding or pole dancing. Who-are-invited.com bases a story and photo shoot around the event to promote through social media. The site, which has collaborated with a series of high-profile brands such as Hermes, Versace and L’Oreal, is still Lau’s number one priority – she branched out into doll-making as hobby.

“It’s time to do something I really like,” she said.

Lau takes custom orders for her dolls through her Facebook page. Each one costs at least 4,800 Hong Kong dollars, or about $618, and takes roughly 30 to 40 hours to complete.

Lau said the dolls she makes today look fairly similar to her first effort. She uses clothespins, wire and cotton stuffing for the bodies and employs a combination of acrylic paint and actual makeup for their faces. The dolls’ under-eyes are heavily made up, in keeping with the Asian “eye-bag” look. A vintage lipstick holder props up the heads as they dry. For hair, she distresses yarn to make it fuzzier and more natural-looking or uses mini wigs she buys from a supplier in Taiwan. Lau scours the Internet for miniature accessories — from Hermès Kelly-like bags to trays of sushi — to round out her dolls’ looks or set up photo shoots for them. Most of them are just under 12 inches tall, which is just slightly larger than a standard Barbie, although she has made a few bigger models as well.

“I searched for at least three, four nights online to find the sunglasses to fit her size,” she said, holding up a doll she designed exclusively for the Peak exhibit. “Some people do miniatures but then the quality is different.”

Joyce tapped Lau, its former employee, to design 10 dolls as part of its Christmas campaign. She dressed them in a selection of archive pieces from designers like Azzedine Alaïa, Alexander McQueen, Viktor & Rolf, Yohji Yamamoto and Jean Paul Gaultier. One donned a tiny tweed Chanel jacket and pearls and another wore a mini version of Comme des Garçons’ famous lumpy dress from spring 1997. Lau stitches all of the clothing herself.

Lau said the Joyce dolls sold out in one day, with each one carrying a price tag of 7,000 Hong Kong dollars, or about $902. She also has made dolls wearing looks from local Hong Kong designers to promote the city’s fashion week and created three bespoke dolls to promote the Shu Uemura collaboration with Kitsune.

Despite snagging those fashion and beauty deals, Lau said she is keeping her doll activities in the hobby realm for now — she said she donates a sizable portion of the proceeds from her dolls to charitable causes.

“I don’t want to make it like a business,” said Lau, who said she is interested in teaching doll-making classes and traveling the world to meet other doll makers. “For this moment, I just really want to enjoy it.”