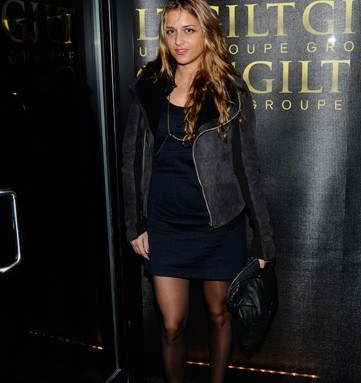 It’s a sign of the times when socialites are attending parties celebrating discount designer goods.

Over cocktails at the Thompson Lower East Side, Bettina Zilkha gushed to friends about the glitzy earrings she recently purchased on the site. “I bought them last week. It’s amazing.”

Another guest said, “If I was shopping, [Gilt Groupe] would be a good place to spend your money, but I’m not really buying.” She wasn’t alone among other women in the crowd who were wearing dresses that were old favorites,
not brand new.

“I only shop if it’s 101 percent off,” joked Tim Schifter. In spite of all this, the designers present—including Peter Som, Doo-ri Chung, Naeem Khan, Jessie Randall, Lisa Mayock and Sophie Buhai, Dennis Basso and Erin Fetherston—remained optimistic. Some had more reason to than others.

“We’re walking on air,” said Ruben Toledo as he escorted his wife, Isabel, whose dress Michelle Obama wore to the inauguration Tuesday, to dinner at Shang.

Uptown, a large enough crowd filled the Park Avenue Armory for the opening of the Winter Antiques Show, but big-name collectors seemed to be in short supply — with the exceptions of Agnes Gund and Peter Brand, who were both browsing the aisles alone. “There are plenty of pretty things, but no one to buy them,” decorator Jamie Drake lamented. Moments later, his client Mayor Michael Bloomberg arrived.

Meanwhile, the chic group that gathered at Donna Karan’s Stephan Weiss Studio had its mind down under. The occasion was a preview of the “Nomad Two Worlds” exhibit, a multidisciplinary showcase inspired by indigenous Australian art and put together by Aussie photographer Russell James. The evening raised nearly $250,000 for Fiona Stanley’s Telethon Institute for Child Health Research in support of Australian aboriginal children.

Guests including Martha Stewart, Amy Sacco and Iman mingled among the photographs before heading upstairs to sup on short ribs and listen to live aboriginal music by Geoffrey Gurrumul Yunupingu. “[Australia] is here in this room,” said the New Age Karan. Hugh Jackman put it another way. “There are more Australians here than at a Hollywood casting office,” said the actor.