Sunday night's virtual awards ceremony offered up a few more surprises for viewers who have been following awards season closely.

Jodie Foster, winner of Best Actress in a Supporting Role in Any Motion Picture for “The Mauritanian”, and Alexandra Hedison at the 78th Annual Golden Globe Awards.

Going into the Golden Globes, many snubs and surprises had already been dealt — the cute-but-ridiculed “Emily in Paris” getting nominated for best TV show, the lack of nominations for the hugely popular “Bridgerton” or Spike Lee’s “Da 5 Bloods” (even though his children were selected as this year’s Golden Globe Ambassadors). But Sunday night’s virtual awards ceremony offered up a few more surprises for viewers who have been following this unusual awards season closely. (Not to mention unexpected sartorial choices.) Below, a look at a few of the surprises and snubs from the night.

SURPRISE: Andra Day wins best actress in a drama
Andra Day faced tough competition in the best actress category —  although well-reviewed in her role as Billie Holiday, she wasn’t considered a frontrunner against Carey Mulligan, Frances Mcdormand, and Viola Davis. Even Day herself seemed genuinely surprised when she was announced as the winner. Her win was particularly notable because it makes her the second Black actress to ever win in the category (Whoopi Goldberg won for her role in “The Color Purple” — over 35 years ago.) Considering “The United States vs. Billie Holiday” was only just released on Feb. 26, the film may emerge as a major contender for Academy Awards voters; voting for nominations opens March 5.

SURPRISE: Rosamund Pike wins best actress in a musical or comedy
Many were predicting a win for “Borat Subsequent Moviefilm” breakout Maria Bakalova, but few were expecting her to be beaten by Rosamund Pike for “I Care A Lot.” (Pike was last nominated at the Globes for her weightier role as war reporter Marie Colvin in 2018 film “A Private War.”) While Pike isn’t considered a major contender for the Oscars — well, you never know.

SURPRISE: Jodie Foster wins best supporting actress in a drama
Another supporting actress surprise was Foster’s win for “The Mauritanian” — but only because she was up against season portrayal favorites Olivia Colman, Amanda Seyfried and young newcomer Helena Zengel. Foster stars in Kevin Macdonald’s film opposite Tahar Rahim, as the defense lawyer for former Guantanamo Bay detainee Mohamedou Ould Salahi. Foster accepted the award sitting next to her wife on their couch (both wearing nice pajama sets!) Their adorable dog Ziggy, sitting between them, was just happy to be there.

SNUBS: No wins for “Mank” or “Promising Young Woman”
Going into Sunday night’s ceremony, David Fincher’s “Mank” had already won the honor of being the most nominated film this year with six nods. By the end of the night, the black-and-white period piece starring Gary Oldman and Amanda Seyfried (both nominated in best actor categories) was left empty handed. Luckily, nostalgic films about Hollywood tend to do well among Academy voters — and the other awards categories at the Oscars (cinematography, costume design, production design, etc.) open up additional avenues for the film to be rewarded.

Emerald Fennell’s “Promising Young Woman” emerged late in the Golden Globes race, although many were predicting lead Carey Mulligan may take home the top actress prize. But it might be fair to see the nominations as the win — Emerald Fennell was nominated for best director along with two other women, the first time that more than one woman was nominated in the same year within that category. That alone is worth celebrating.

SURPRISE NO-SHOWS: Dev Patel and Frances McDormand
This year, actors need not travel far to find out if they’ve won: the largely virtual show meant that nominees Zoomed-in from home (or hotel, in the case of some). While that translated to casual sartorial choices for some (Jason Sudeikis in his tie-dye hoodie; Jeff Daniels in a plaid shirt) it also meant that, well, some actors didn’t show up at all — or, at last they opted to keep the video camera off. Surprisingly absent were Dev Patel, nominated for his lead role in “The Personal History of David Copperfield,” and “Nomadland” star Frances McDormand — although one has to imagine she was beaming from her living room as she watched her director Chloé Zhao accept the award for best director and best film. 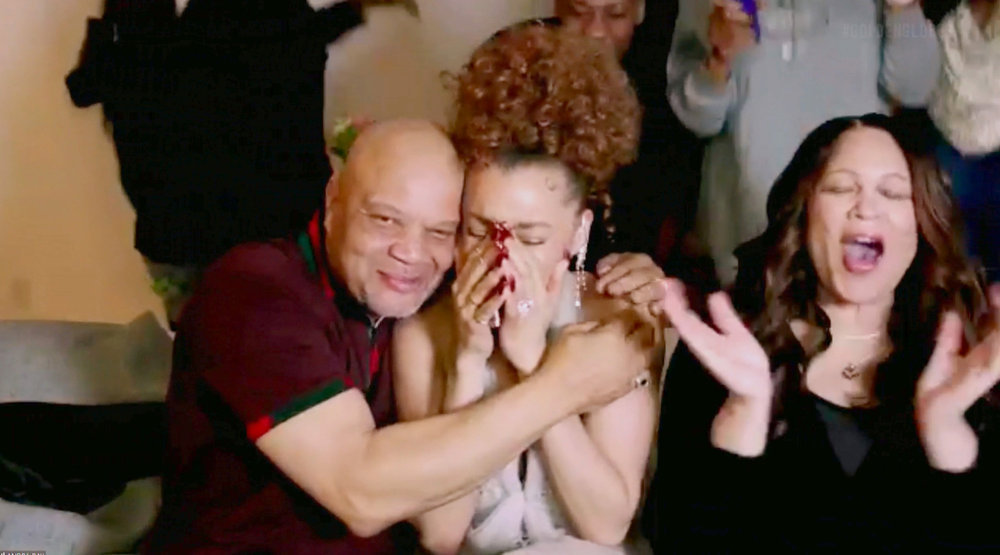 Andra Day reacts after being named winner of the Best Actress – Motion Picture Drama award for ‘The United States vs. Billie Holiday’ at the 78th Annual Golden Globe Awards on February 28, 2021.   NBC 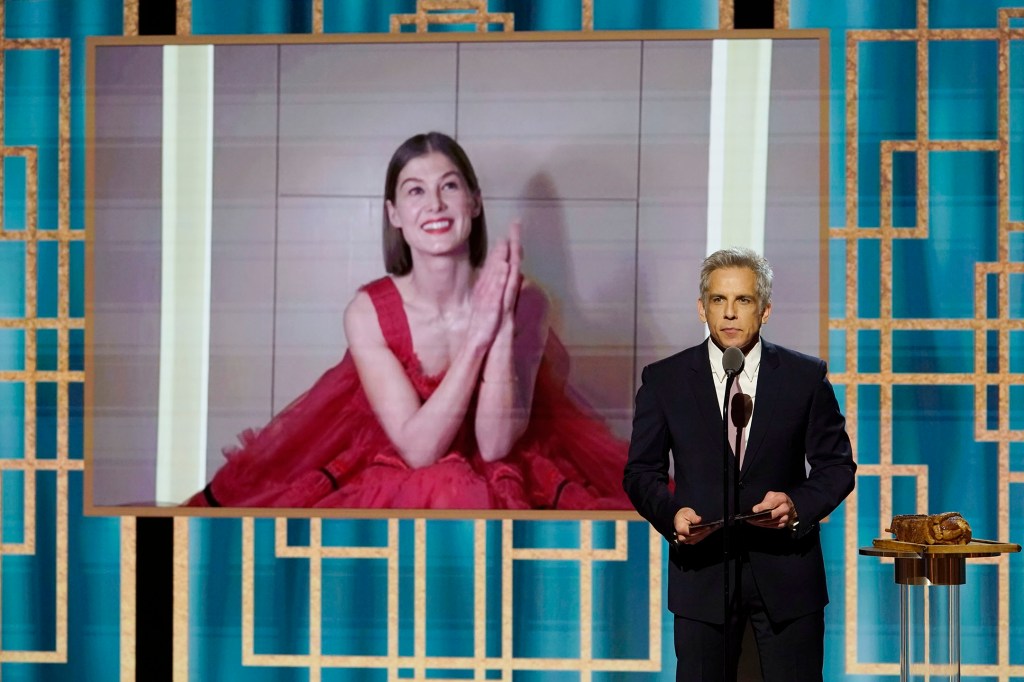 Rosamund Pike accepts the award for Best Performance by an Actress in a Motion Picture — Musical or Comedy for “I Care a Lot” via video.  Peter Kramer/NBC/Courtesy Photo