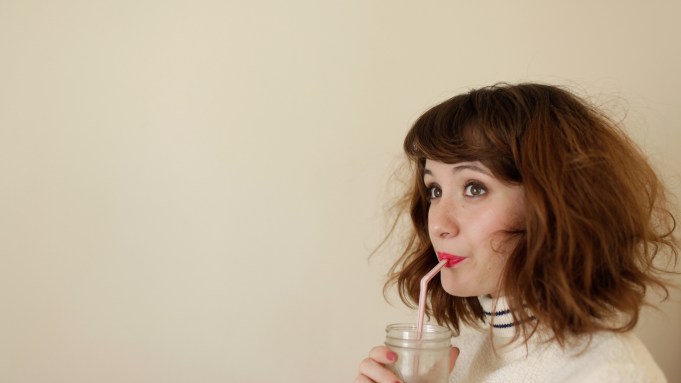 “For whatever reason, I really feel like I get Aziz,” says Noël Wells, over the phone from Los Angeles, on her way to a spinning class. “Like on a person-to person level.” She is, of course, talking about Aziz Ansari, on whose much-anticipated Netflix comedy “Master of None” she stars, out Friday.

No matter her own résumé, the comedian, who was crowned “class clown” in kindergarten, came onto the 10-episode set with wide-eyed wonder. “I was a little insecure about the whole thing but throughout the process [Aziz] was like ‘you’re really cool and funny’ and that meant a lot to me,” Wells says. “And so I obviously have nothing but nice things to say about Aziz because he told me I was funny.”

The 28-year-old actress was born in San Antonio, Texas, two days before Christmas — hence the name — and moved around a lot growing up, which meant as a kid, her closest friends were often her teachers. “But when teachers think you’re cool, kids don’t really think you’re cool,” she deadpans. Comedy became her way of coping. “I was very studious and got very good grades, but I was also an incredibly anxious and lonely kid, and since I moved around a lot I was alone a lot,” Wells says. “And I think being funny and being a performer helped me make friends when I got into new situations.”

After graduating from the University of Texas in Austin in 2010, with dual degrees in radio-television-film and Plan II honors (a UT Austin-specific interdisciplinary major), Wells spent the summer working in motion graphics to save money for the actor-dream-migration: Los Angeles. Once there she enrolled in improv classes at Upright Citizens Brigade, which led to the discovery that, in fact, “I was terrible at improv,” she says. But she soon found her way onto a sketch team at UCB, where she stayed for two years until “Saturday Night Live” came calling.

“Master of None,” is billed as conceptualizations of Ansari’s life experiences with race and culture — hefty topics taken on with his trademark comedic wit. Wells auditioned for the show coming off her run on SNL’s 39th season, “and it went really bad,” she says. “So I was like I’m never going to see these people again.” Three months later she was called back for another audition.

The show is unsurprisingly flushed with comedy world heavy-hitters; H. Jon Benjamin, who’s been everywhere from “Family Guy” to “Archer”; Kelvin Yu, a writer from “Bob’s Burgers”; “Dear White People” aluma Lena Waithe – and a familiar face to Wells, Eric Wareheim. “When I first moved to L.A., I interned for [comedians Tim Heidecker and Eric Wareheim’s production company] Abso Lutely,” Wells says, “and then I got to do scenes with Eric Wareheim, and it blows my mind that five years earlier I was somebody bringing water to people on set.”

Wells plays Rachel, the love interest to Ansari’s Dev. She’s a twentysomething girl trying to figure out life — ripe in reliability and uniquely approachable for a female lead on modern television. “Rachel is a very cool, laid-back girl, who kind of has her life together and has done all the right things, but then kind of has a crisis of identity — she did all the right things but now is like, ‘Is this really what I wanted?’” Wells says. “It’s about where are we in our lives, how do we want to define our lives, are we living the life that we always imagined?”

The eagerness to jump into such topics, and with humor, is what has earned “Master of None” early praise everywhere from New York Magazine to Vanity Fair. “Actually what drew me to the show was people actually are having discussions and people aren’t yelling but they’re talking about it,” Wells says. “I feel like for millennia, women’s world view hasn’t been made legitimate, and I think we’re in a really cool time where we’re all listening.”

On the side, she’s busy producing, writing and starring in a new series for Comedy Central, together with her boyfriend Flint Wainess, which is called “Bad Couple.” The plot, she teases, is best summarized as “what if Larry David was dating another Larry David?” She’s also starring in “Dreamland” alongside Jason Schwartzman and Shay Mitchell, due in 2016. “For the first time in my life I feel like I have the opportunity to make some of my bigger projects actually come to life,” she says.

Realizing these dreams is very much in line with “Master of None.” “What I think is so great about Aziz’s show is it’s so true to him and what’s happening in his brain,” Wells says, adding that this approach is where she wants her own work to follow. Though she’s garnered much notoriety — and over 12 million views on YouTube — for characters and impressions, “what I’m more interested in is realistically investigating what it’s like to be me.”