The Seven Lives of Noomi Rapace

The actress stars as seven twin sisters in the Netflix film "What Happened to Monday?" 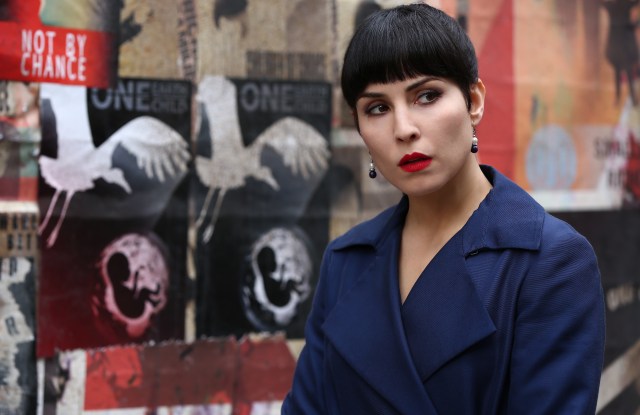 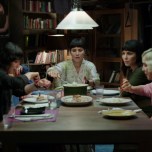 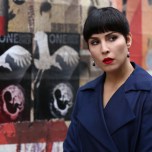 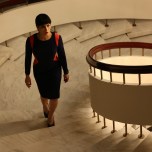 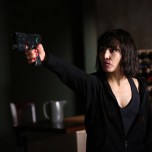 For her next film, Swedish actress Noomi Rapace took on a unique challenge: playing seven characters.

In the dystopian sci-fi film “What Happened to Monday,” Rapace plays the part of seven twin sisters, each named for a different day of the week. In hiding from an overpopulated world where only one child is allowed, each sister take turns living out in the larger world on the day of the week for which they are named. While the story hinges on them all pretending to be the same person by looking and acting the same, back at home each sister exhibits a distinct personality and look. Rapace is no stranger to leading a film and being the only actor in a scene, but the Tommy Wirkola-directed film for Netflix required six of her costars to be, well, herself.

WWD spoke with Rapace about how she approached the roles, which sisters were her favorite, and what she’s working on next.

What appealed to you about this film, story and character?
Noomi Rapace: Tommy Wirkola called me. I was shooting a movie in Europe, and he called me and was like, “So, Noomi, I have a project, I want you to read it. It’s seven brothers, but I can only imagine you doing it, so I want to change it into seven sisters. I want to send it to you.” I was like, “Wait, what, what are you talking about, this is crazy!” And then he sent me the script and I read it, and I totally fell in love with it. There’s a very strong political message in it, but most of all the challenge of playing seven different people was just something I was like, I have to do this. But it was also terrifying, obviously.

What was it like playing so many characters at once who share screen time?
N.R.: I kind of had to invent a completely new message. My whole message normally is to listen and react and I’m in there with my costars. But on this one I was alone most of the time. It was me with a green screen or tennis balls or marks everywhere. Or I had six double girls that were sometimes playing the sisters when they could shoot from behind. So then I had to direct the double girls and show them what I was going to do before I’d done it. I had to prep and prepare, plan everything in a completely different way.

I was very involved in the script, so when we were changing it from brothers to sisters, I worked really closely with the writer and with Tommy to build the sisters and make them all become full, layered characters. I didn’t want them to be cliched, like oh, this is the nerdy one, this is the sexy one, this is the angry one. I wanted them to feel really rich and solid. So I was using myself a lot — and in different times of my life I’ve been very different. You know, there was a moment when I was a teenager when I was very much like Thursday — I was very rebellious and angry and explosive. And then I was more like Wednesday — for a year I was working out in martial arts, completely 100 percent committed and devoted to my training, very much a tomboy. And then now the last year I’ve been more like Saturday, more into pink and high heels and girly stuff. It was amazing to realize that I have them all in me.

Did you film each sister at a time, or did you switch back and forth between the characters?
N.R.: It was insane. One day I was all seven. I remember when we wrapped for that day I had no words left, I was just gone. Some days I was three, some days I was five. And every scene we had to find different ways of shooting. I was working really creatively close to the cinematographer and director to find different solutions for what the different scenes required.

Did you have a favorite sister?
N.R.: Well, I was very much in love with Saturday, because she’s a contradiction. She’s very girly, and she’s drinking, she’s really funny, she has this really witty, almost sexual, humor. But at the same time she has innocence. You think she’s a slut, you think she could have a lot of dudes, and then you realize that she’s a virgin. I just love that she’s really layered and funny. It was really fun to play her. So I think between her and Wednesday, they were my two favorite girls.

What did you do to prepare for the film?
N.R.: I was working out twice a day for months before and doing a shoot as well. I was up at 4:30 every morning. I went to the gym, first thing I did. Went over the dialogue for the day. Just to learn seven voices is very different than just learning lines for one character because I had to learn everything from two angles or five angles. It was just very trippy. So I was very disciplined for five months. I was up every morning, worked out, went to the studio, filmed all day, came back to the hotel, went to the gym, worked out and prepped next day and went to bed. So I didn’t have a personal life whatsoever, it was 100 percent the girls for five months.

The preparation was very physical when I was working with the stunt team. I was also very much just closing my ears to the world and finding my own concentration, because I knew that I had to use everything I had: my strength, my concentration. My emotional world had to be completely devoted to the girls. It was quite lonely, the preparation, and I more went into my own zone.

What did you think when you saw the final cuts of the film, and seeing yourself as so many characters at once?
N.R.: I normally don’t like watching myself because when I’m filming, when I’m working, I decided I’m never going to be vain. It doesn’t matter what I look like, I need to do what’s right for the character.

I forgot it was me, which was really weird. Because it was too many of me, sort of. I think it was the first time I could see a movie that I’d done for just a movie, because it was too much. I was not so self-conscious when I saw this one. And I’m actually quite proud of it, because I know that we all did everything we possibly could, and I’ve never worked so hard. My biggest fear was that you wouldn’t believe that they were talking to each other, that they actually coexisted, and when I saw the film it felt like yeah, they are actually all there together. Which was a big relief to me. It was quite strange watching it.

What was your dynamic with director Tommy Wirkola?
N.R.: I love working with him. It was me and him creating this, and there were some days where I was just close to tears, like, “Tom I can’t, I’m so tired, I’m in so much pain.” And Tommy was there with me, next to me all the time, like, “Noomi remember our mantra: we are the first people doing this. It hasn’t been done before. Keep your eyes on the stars, look up, stay focused.” We were a team and we had so much fun.

What are you working on next?
N.R.: I’m playing a bodyguard. I’m training with a bodyguard team in London. The film is called “Close.” A lot of shooting and just learning close protection. We shoot in London and Morocco. It’s a violent drama, and it’s me and Sophie Nélisse on the run. I’m protecting her against a lot of bad people. It’s a female director, so I’m superexcited.

More Coverage From WWD.com:
Tom Bateman, in It for the Thrill of It
Lucy Boynton Hits Her Stride
Tilda Swinton Reunites With Bong Joon-ho For “Okja”
Ruth Negga, on The Road Again