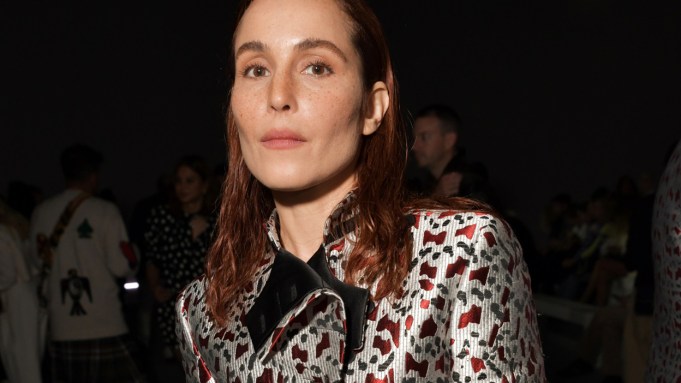 ICE QUEEN: How do you keep up with a challenging schedule? For Swedish actress Noomi Rapace, the secret lies in ice baths.

“This summer, I went from shooting in Louisiana where it was 40 degrees Celsius to filming in Iceland where it was minus-1,” said the “Millenium” star, speaking at the Haider Ackermann show on Saturday. “My body was like, what is going on?”

On top of healthy eating and working out daily, the actress regularly submits to ice baths. “I do them everyday for my face, and as often as I can I fill a bathtub with water and ice and just jump in,” said Rapace. “I know, I sound like a crazy person.”

Shooting in freezing weather was made easier by her personal connection with Iceland. “I was basically going back to my roots: Iceland is where I shot my first film when I was seven,” she continued. “It’s also the most incredible script I’ve ever been given.” “Lamb,” directed by Valdimar Johansson, is a supernatural drama in which Rapace plays an Icelandic sheep farmer in the early Forties.

A few seats away from Valentino cofounder Giancarlo Giammetti, for whom Ackermann is “a friend of the house,” Juergen Teller was sitting in the front row alongside model Farida Khelfa.

“I got up at 5.30 a.m., but it’s fine,” he said. The German photographer is shooting a project for the Paris Photo fair, simply named “I Love Paris.” Teller’s photos will be shown at gallery Suzanne Tarasieve’s booth at the fair, which will open on Nov. 7. “I’ve always had a good rapport with this city,” shrugged Teller. “I find it very photogenic.”

Luka Sabbat and Sonny Hall were catching up alongside model and actress Josephine de la Baume.

“We met in New York when we were young ragamuffins,” said Hall, a British poet who recently collaborated with Kate Moss for the shirt she did for the Tribute to Karl project.

Both friends are 21 years old — surely that qualifies as still being young?

“We were little knuckleheads, that’s what he meant,” laughed Sabbat. “We’re still young, but a lot of stuff has changed.”

“Clearly,” chipped in Hall. “I used to come to Paris from London on the 10 pound coach and it took me 11 hours. And now look where we are.”