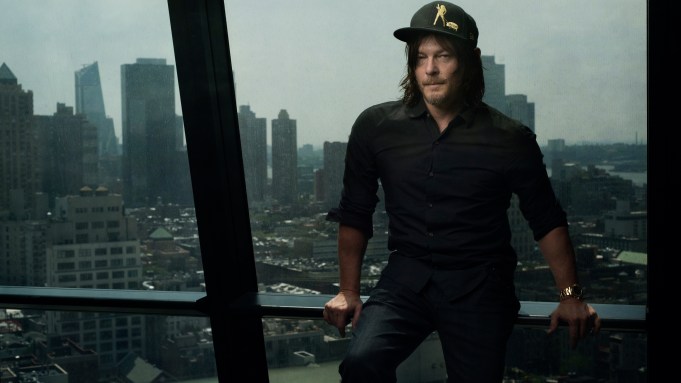 Norman Reedus is bringing his neck of the woods to the blocks of Miami.

Reedus, who spends much of his time in Georgia, where he lives and films the TV series “The Walking Dead,” is showing an exhibition of his photography at The Bonnier Gallery during Art Basel Miami Beach. His photographs draw from his immediate surroundings, and his latest show hinges on the emotional intimacy bred through familiarity. Many of the people photographed are close friends, whom he’s worked with and met through his on-screen career.

“I have hard drives and hard drives of photos,” says Reedus in late November, shortly after wrapping the latest season of the show. “I’ve traveled so much in the past 15 years that I just take so many photographs, and then I stockpile them. And then we’ll have an idea to do a show and sometimes it’ll be theme-based, and sometimes it’ll just be wherever my head’s at when I’m picking the photographs, and this was more of the latter. I shoot ‘The Walking Dead’ out in the countryside in Georgia, and I’m really isolated there — and not just where we film the show, but where I live out there, and I think it was kind of like, this is where I’m at right now.”

While he’s shown during Art Basel Miami Beach several times as part of group shows — including as part of his cooperative gallery in downtown New York, Collective Hardware — this show marks his first solo exhibition during the fair. Reedus works with art curator Laurie Dolphin to organize his shows; several of the photos shown in Miami have also been shown at Sotheby’s and the Paris Contemporary Art Show.

The show is appropriately titled “Portraits From the Woods,” but it’s not all zombie photos and behind-the-scenes production shots; the portraits paint a quieter picture of his life off-set, too. In many cases, the photos are an opportunity to consider specific moments within their context. In one self-portrait, Reedus appears in silhouette, his fingers held in the peace sign, while shooting the indie film “Sky” —  easily an off-the-cuff shot, but more weighty when you consider that it’s the set where he met his partner, the actress Diane Kruger, who costarred in the film.

A similar intimacy is captured in his portraits of his other costars and collaborators: there’s Seth Gilliam in character for “Walking Dead” and there’s Jeffrey Dean Morgan out of character; there’s video game director Hideo Kojima, wearing a “1984 George Orwell” shirt and gesturing to a portrait on the wall of Reedus posing with his “Walking Dead” costars Andrew Lincoln and Scott Wilson, who passed away last year.

“I think it’s more intimate sometimes,” says Reedus of the potency of the still-versus-moving image. He notes that a portrait allows him to try and capture what he imagines is on the mind of his subjects in that moment. “And if you can capture what you think their thoughts are, or a time or a place based on their face, it becomes a more intimate thing,” he adds. “Sometimes you can get into the soul of the subject of a still image that you can’t get with film.”

Reedus credits his experience in front of the camera for an ability to anticipate moments and guess where a situation might lead.

“If you don’t have any experience in front of the camera and you’re taking pictures, you’re sort of waiting for something to happen sometimes or trying to force something to happen,” he says. “If there’s a ton of chaos around that you’re very familiar with, then you kind of know where that subject’s going to go, what they’re going to start to think and when they’re going to start to panic — and when the panic’s over, because you’ve been there before.”

In the case of Kojima, Reedus is able to tap into familiarity built over time.

“He’s a very quiet person, so once you hang out with the guy a long time, then he’s hysterical: he’s super funny, but it just comes out in subtle little ways,” he says. “That just comes with hanging out with him a lot. You can force it or you can just live it and find it, but you know when it’s coming.”

Because so much of his photography process is rooted in anticipation, he’s constantly prepared to shoot versus setting out to shoot specific subjects.

“Most of the time I just have a camera on me, and I don’t pull it out all of the time — I’m not one of those guys who just walks around and shoots aimlessly,” he says. “I’m a kind of on-the-fly type of guy.”

That approach extends to his equipment, too. He shoots primarily in digital, but also uses film, including on old cassette stock using the Fisher Price Pixel video camera, a toy from the Eighties. “I like to find old film and just see if it works and then see what happens,” he says. “You have to buy it in bulk on eBay and hope it works.”

Reedus is gearing up to shoot the next season of his AMC travel-by-motorcycle show “Ride With Norman Reedus.” The show takes him all over the U.S. and internationally with a cast of rotating friends, and is fueled by the unpredictability of going with the flow. In other words, it’s a mine for material.

“We don’t know what we’re going to find, but usually when locals tell you to go to the hidden spot, that’s when you gotta get your camera ready, because you’re going to meet people who are super interesting and are just drawn from a different cloth,” he says. “We’re about to head out this year to some really crazy exotic locations, and I know I’m going to get gold at those places.

The Bonnier Gallery will host a party for the exhibition in Miami on Dec. 7.