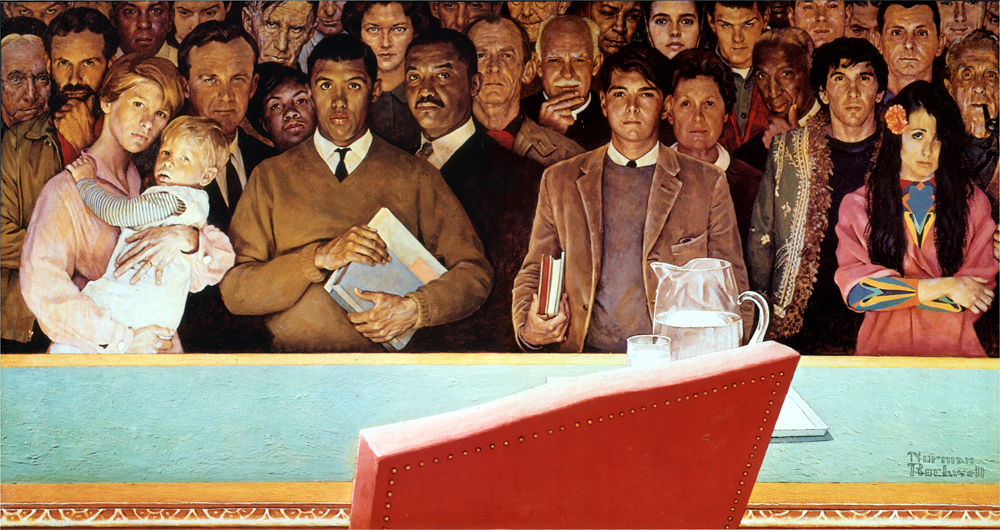 Freedom is always in fashion, and Norman Rockwell’s “Four Freedoms” is back on the road, touring museums to illustrate that point.

First stop of the multicity tour is the New York Historical Society, where the artist’s “Four Freedoms” is the main attraction. The quartet of paintings — “Freedom of Speech,” “Freedom of Worship,” “Freedom from Want” and Freedom from Fear” — were inspired by Franklin Delano Roosevelt’s Four Freedoms delivered in a State of the Union address. Organized by the Norman Rockwell Museum in Stockbridge, Mass., this is the first international tour of the work. Most of his iconic depictions appeared as covers for the Saturday Evening Post magazine.

At a time when racism, immigration and freedom of speech are paramount in the media and in conversation, or arguments as the case may be, Rockwell’s art packs a mighty punch. The wiry, unassuming artist, who died in 1978, has been in the news of late, after the controversial sale of work he donated to the Berkshire Museum. His three sons banded together to try to block the sale, to no avail.

One of Rockwell’s granddaughters Daisy spoke of the man, his messages and why George Lucas and Steven Spielberg remain ardent fans. Rockwell was “very self-deprecating” and was “always sure that people would lose interest in his work pretty soon,” she said. “I think he would be very surprised that people continue to find the work fresh and relevant.”

People who interpret his work as simple or Hallmark-ish are off-base. Even though he was not an intellectual and never finished high school, she said, “there is a lot of thought that goes into the work that is in conversation with history. As you see, human rights became an issue for him. He’s not just depicting a middle-class fantasy the way that I think he has been unfairly characterized as doing. He’s really thinking hard not just about American values but human values.’”

In order to set up his paintings, Rockwell, “like a professional photographer, would take hundreds and hundreds of photographs and stage models in a particular way. He was actually a director in his own right,” Daisy Rockwell said. “People sort of naively imagine that he came upon people doing certain things, and it was kind of a snapshot. But these things all came from his imagination. He would stage-manage the models and work from the photographs. His sensibility is very in tune with filmmaking. George Lucas and Steven Spielberg must recognize that because they see him as the consummate American storyteller.”

Rockwell spent a year in Hollywood, painting portraits of Bing Crosby, John Wayne, Ann Margaret and other cast members in “Stagecoach.” During that time, he became friendly with Walt Disney. “They weren’t drinking buddies, but colleagues who were very friendly with each other and shared certain sensibilities about telling stories,” Daisy Rockwell said.

Not a talker, Rockwell would, however, engage his models to get them to relax and smile for the paintings. A workaholic, he had little time for leisure, preferring to stay holed up in his studio, which was always a separate building next to his house. While living in Arlington, Vt., after the artist’s studio burned down, he created a cartoonlike painting of the scenario. In the autumn of his life, the Norman Rockwell Museum was started in Stockbridge, Mass., but relocated to a campuslike facility with the help of donations by Spielberg.

Last month, the “Star Wars” filmmaker’s Lucas Museum of Narrative Art plunked down an estimated $25 million for Rockwell’s 1959 “Shuffleton’s Barbershop,” which was part of a Sotheby’s auction by the financially strapped Berkshire Museum. Rockwell’s three sons sued the Berkshire Museum to try to halt the sale of work donated by the artist. Rockwell lived in the Americana area for many years. “Our family was opposed to that [sale]. He gave them explicitly to the Berkshire Museum because he wanted them to be part of the Berkshire community. He thought the Berkshire Museum would be the best home for as many people to see them as possible. He was always concerned about his work ending up in the basement of some museum. It’s really a shame,” Daisy Rockwell said. “Unfortunately, he did not specifically write out why he was giving the paintings to them…but the best that could be done was the buyer turned out to be George Lucas’ Museum [of Narrative Art]. That is going to be in L.A [with a tentative opening set for 2022.] He said the painting could be housed in Stockbridge for a year or so until it goes to its destination.”

In addition to the “Rockwell, Roosevelt & The Four Freedoms” exhibition on view at the NYHS through September 2, the Roosevelt House at Hunter College has a companion show “Reimagining The Four Freedoms, A Traveling Show from the Norman Rockwell Museum.” Daisy Rockwell, Deborah Samia, Robert Selby and Soody Sharifi are some of the featured artists in the second show. Like her grandfather, Rockwell’s work has many layers. She said her portraits often have a good deal of text. “There is deconstruction, but in an intellectual sense not a visual sense. How do well pull apart these notions that get solidified in our minds about evil or assumptions that turn into things that endanger us all like Xenophobia, Islamophobia and things like that?” Rockwell said.