Behind the baseline, the tennis champion is known to be a tenacious competitor, but at Macy’s Armani Jeans shop Thursday night, he was all charm. 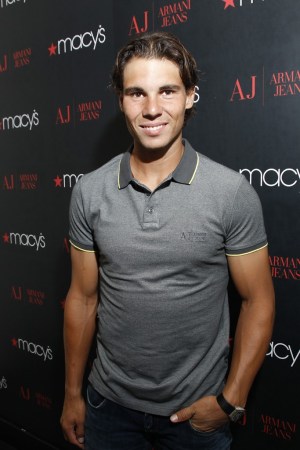 Behind the baseline, Rafael Nadal is known to be a tenacious competitor, but at Macy’s Armani Jeans shop Thursday night, he was all charm.

The 10-time Grand Slam winner smiled broadly throughout the meet-and-greet, lowering his head ever so slightly as some 400 fans chanted, “Rafa, Rafa.” Security guards marched up and down the floor’s main aisle trying to keep everyone, including scads of cellphone-snapping admirers, in check. After taking the train into the city from New Jersey and waiting an hour in the flagship, an autograph-seeking teenage fivesome from the Ramsey Tennis Team were armed and ready with tennis balls. While a few harped on his athletic skills and likability, Lauren Webb cut straight to the chase, “And he’s hot.”

This story first appeared in the August 26, 2011 issue of WWD. Subscribe Today.

The number of women standing on their tiptoes trying to steal a glance of Nadal in the flesh as well as bare-chested in Armani Jeans’ new ads seemed to support that assessment. The guest of honor, who was also seeing his photos for the first time, was decidedly more low-key about the swarm of admirers. “It has happened a few times. It is nothing new for me,” he said, during an interview after the unveiling. As for his modeling, the 25-year-old said, “I think it was good. It is the second time I have done the campaign.”

Wearing Armani patent leather sneakers, jeans and a polo shirt, Nadal described his style pretty much to a T. “Jeans, polo shirts and jackets — that’s normally how I dress,” he said. “Now that I’m working with Armani [it] is a new experience. It’s a different world that is very positive for me. I enjoy it a lot,” he said.

But that doesn’t mean he’s gone overboard with fashion, nor does his girlfriend offer him style advice. “If I see something I like, I get it,” Nadal said.

His approach to tournaments is equally no-nonsense. Asked what is most challenging about competing he said, “Nothing. This is what I have done all my life. I practice every day and try my best in every moment. I try to think positive all the time. You never know when you are playing not-so-good, when you might start to play well. You just have to try your best in every moment.”

As for his rivals, Nadal said Novak Djokovic is doing “fantastic,” and Roger Federer, Andy Murray and Andy Roddick were others who earned his praise. Every match is difficult because anything can happen from one moment to the next. “For me the most difficult part is that we compete almost every week. Our season starts the first of January and ends on the fifth of December,” he said. “We only get three weeks off to prepare.”

With the start of the U.S. Open just days away, the tennis pro has been busy practicing but he did manage to catch “Mama Mia” the other night on Broadway. “The music was fabulous,” he said. Aside from trying a few new restaurants, Nadal’s only other nonathletic diversion is to check out the street scene on Fifth Avenue when he can slip away from his hotel near Central Park after practice. “I love being around all the people. It’s very busy,” he said.

A few days of R&R in his native Majorca is the best he has done for a break. Asked if the near-nonstop training wears thin and he gets tired, Nadal said. “Sometimes I rest for a day but then I train again.”