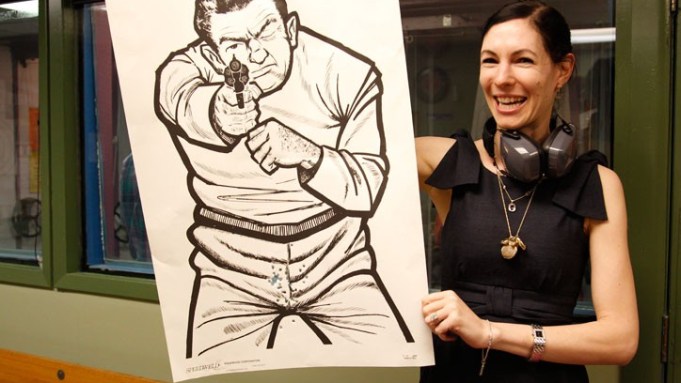 A few weeks before the release of her eighth novel, “Arm Candy,” in stores this week, Jill Kargman gets dressed for a ritzy cocktail party for billionaire Jonathan Tisch at MoMA. She puts on her go-to navy Marc by Marc Jacobs frock, gold kitten-heel sandals and a mix of delicate necklaces, grabs her beige-and-black quilted Chanel bag and heads out the door. But not before she remembers her newest accessory: a black, clunky, ripstop-nylon backpack with a patch label across it that reads “Team Glock.” She is bringing the backpack because, on her way to the museum, she’s going to let off a few rounds at the Westside Rifle & Pistol Range. And she needs something to hold her safety goggles and ear protectors.

Now, the only thing odd about all this is that it’s a Thursday. Kargman usually shoots guns on Saturdays. Or at least she has ever since her 35th birthday in July. “I felt like I was getting sucked down the mommy vortex and I needed something that was my own,” she says (her books, though charming, are not sufficiently cathartic: “Arm Candy” follows an unlucky-in-love aging model). “With guns, it was something so radically outside my life that it was this weird, bizarre, loud sanctuary.”

It’s a funny way to describe the Westside Rifle & Pistol Range, which takes up the basement floor of an office building on West 20th Street and where shots go off every few seconds. (The sound is muffled by the bulletproof wall separating the shooting stalls from the rest of the club, but it is no less startling.) The drab lobby consists of a cashier booth, a card table and chairs, several lockers and a round rack of T-shirts and tanks with the Westside Rifle & Pistol Range logo on them.

This afternoon there are about a dozen customers. Kargman is one of two females. The other woman, needless to say, is not in a cocktail dress.

Kargman sits at the card table nonchalantly loading cartridges for her .22 rifle. “Nothing can ruin a good manicure like loading bullets,” she says, grabbing another handful. Her instructor, a quiet, tattooed man named Johnny, hangs around while Kargman heads into the stall with her target — a somewhat laughable drawing of an armed man. (Targets with small animals on them are also available.) Asked to rate his charge’s technique, teacher Johnny gives an unenthusiastic shrug. But after 10 rounds, Kargman has successfully castrated her victim.

“I started going just every once in a while and now I go every week. It’s just a break,” Kargman says of her new pastime. “When I had my first lesson, they were like, ‘Holy s–t! You’re a natural! You’re a great shot!’ I ended up being good at it, and it feels good being good at something.”

On a typical weekend, Kargman and her husband, Harry, will spend Saturday carting their three kids — Sadie, 6; Ivy, 4, and Fletch, 2 — to Brooklyn for brunch and to the Fairway in Red Hook, N.Y., for groceries. “So by the time Harry drops me off, we’ve sat through our whole brunch and pushed around the grocery cart, the kids are screaming in the car and Mommy needs to f—ing bust a cap in that rapist’s trousers or slacks — whatever those Seventies things are,” says Kargman, visibly amused. “It’s really liberating for me and I find it kind of funny. It’s not lost on me that it’s totally random.”

Kargman, a Yale-educated art-history major whose previous chick-lit titles include “Momzillas” and “The Ex-Mrs. Hedgefund,” was raised on the Upper East Side by her father, Arie Kopelman, the former president of Chanel, and mother Coco, a philanthropist and ballet patron. As a child, Kargman would spend every Friday night glued to the television with her family, eating take-out Chinese and watching “Miami Vice.”

“It was like a religion, ‘Miami Vice,’” she says. “There would be dead bodies everywhere with blood. My dad would be like, ‘You see what drugs do? They ruin lives!’ So I was so scared of drugs. However, the simultaneous effect was this obsession with guns.” Her brother, Will Kopelman, also frequents a rifle range in Los Angeles, where he lives.

Kargman learned about the Westside Rifle & Pistol Range through two male friends who are members. She recruited a friend’s husband to join her. As for what her own husband thinks of his wife’s newfound hobby, she says: “I think he thinks it’s cool. I think at first he thought it was a little weird because he saw all these changes happening all at once. [Guns are just one component of what Kargman thinks may be an early midlife crisis. She also got a tattoo.] But then he sees the shots on the target and thinks it’s kind of badass.”

Kargman is using the experience as fodder for her next book, a collection of personal essays titled “Sometimes I Feel Like a Nut,” due out next year. But at the end of the day, she says, her gun hobby is just “totally fun. I feel like it cuts and pastes me out of my milieu of strollers and all that and puts me into retired cops and military dudes. It’s a reminder that there’s a whole world outside of your little life.”