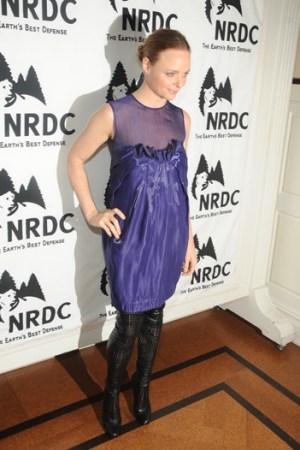 With its Forces for Nature gala Monday night, the Natural Resources Defense Council proved that green is good. The environmental group gave back to the planet (daffodil centerpieces were being replanted in a children’s park), cut costs (a vegetarian meal is cheaper than rubber chicken) and managed to find professional comedians who could actually get a laugh from a crowd like this.

Meyers was one of many SNL cast members in attendance at 583 Park Avenue, at the prodding of their boss Lorne Michaels, who was one of the evening’s chairs. “I’d do whatever [Lorne] tells me,” Meyers said. “If he were to say that global warming was bulls— I’d be out of here.”

Michaels knows better, and so the actor stuck around, as did partygoers including Tom and Kathy Freston, Barry Diller and Diane von Furstenberg, Graydon and Anna Carter, Robert F. Kennedy Jr., Ron Perelman and Zhang Ziyi. Host Alec Baldwin bragged to the audience that he had arrived to the event in “an energy-saving hybrid car. Sure, I was followed by six bodyguards in two Hummers, but the effort was there.”

Chances are honorees Stella McCartney and Discovery Channel chief David Zaslav made more sincere strides toward keeping the evening as carbon neutral as possible. “A love of nature has been instilled in [Stella] as she grew up,” said her father Sir Paul, accompanied by his girlfriend Nancy Shevell. “But I don’t want to take any credit. She’s a smart girl. When she came in to the fashion industry, she came in to Gucci, which is leather city. I was really wondering how long it would be before she’d have to cave in to the economic pressures, but she just hung in there.”

Though Stella was gracious in receiving her father’s praise, she wasn’t exactly comfortable in the spotlight. “I try to avoid this kind of recognition because it can pigeonhole you,” she said. “It’s my job to make people not notice that I’m working in a slightly more responsible way.”

Fair enough, but there was no not noticing the killer, synthetic thigh-high boots she was wearing. “I don’t want people to buy my stuff because they know it’s not leather,” she said with a smile. “I just want them to want the boots.”