The Duchess of Cambridge's choice of a Sarah Burton for Alexander McQueen gown reinforced her position as one of fashion’s newest stars. 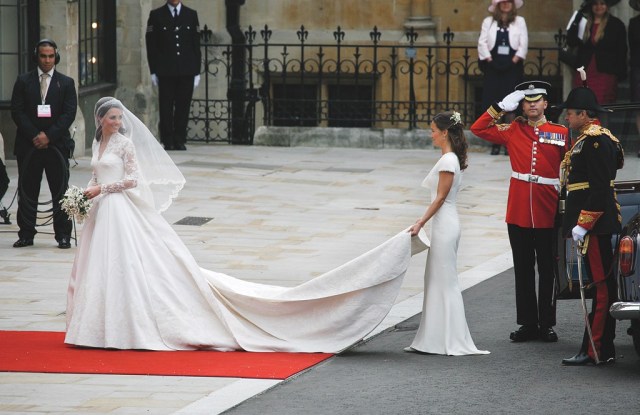 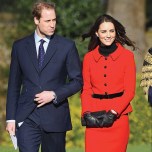 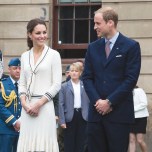 The whole world watched the wedding — and is still watching every move, fashion and otherwise, of Kate Middleton, who became the Duchess of Cambridge in tying the knot with Prince William. Every outfit she wears is scrutinized and when replicas hit the high street, they’re instant sellouts. Has a style icon been born?

The jury’s still out on whether her fashion persona can live up to the likes of Diana or Jackie. Her style is chic but understated. While she’s made no major faux pas so far, nor has she ventured into the vulgar, she hasn’t exactly pushed the envelope, either. In choosing Alexander McQueen for her wedding gown, she catapulted the house into nearly “household-name” status. Kate mixes it up when it comes to her fashion choices, wearing high street labels like Reiss, Zara, LK Bennett and Whistles, while for designer, she’s worn McQueen, Erdem, Diane von Furstenberg, Amanda Wakeley, Jenny Packham, Issa and Roksanda Ilincic. She picks lots of strong solids, more or less conservative silhouettes, and seems to be on a one-woman quest to bring back hosiery.

With the eyes of an estimated 2.5 billion around the world trained on the  nuptial festivities, the dress in question made its first appearance when the bride stepped out of the Rolls-Royce at Westminster Abbey. Middleton surprised with her choice of a label known for its beautiful yet directional designs. But designer Sarah Burton’s vision trod an appropriately elegant line. She created a corseted dress with a cinched waist and full skirts in ivory and white satin, with modest, long lace sleeves and a high lace collar, worn with an ivory tulle veil.

Clarence House said Middleton chose McQueen “for the beauty of its craftsmanship.”

“Miss Middleton wished for her dress to combine tradition and modernity with the artistic vision that characterizes Alexander McQueen’s work,” the palace said. And in a nod to England’s heritage, Burton had worked with London’s Royal School of Needlework to create the delicate lace that adorned the dress’ bodice, sleeves and skirts. The designer — who had endeavored to keep her work on the dress a secret — also created the slinky, figure-skimming white bridesmaid’s dress that Kate’s sister, Pippa Middleton, wore as maid of honor.

Just as fascinating were the getups that the 600 guests chose for their trip to Westminster Abbey. Princesses Beatrice and Eugenie took an adventurous turn with their Philip Treacy headpieces, which took on something of a life of their own, with Internet spoofs likening Beatrice’s hat to everything from an octopus to a pretzel. But Beatrice saw the funny side, and wound up auctioning the hat on eBay to raise money for children’s charities, fetching about $126,000.

Aside from Kate and William’s ceremony, 2011 proved to be a major year for weddings, royal and otherwise. In July, Prince Albert of Monaco married Charlene Wittstock, who walked down the aisle in Monaco in a Swarovski-studded Giorgio Armani silk gown, complete with a 65-foot train.

Later in the summer, Kate Moss got hitched to musician Jamie Hince in a laid-back, quintessentially English ceremony in the Cotswolds, for which the bride wore a custom John Galliano bias-cut gown, inspired by Zelda Fitzgerald. Fittingly for a supermodel, Moss managed another two outfit changes on the night — Stella McCartney designed an oyster silk chiffon dress for the model’s first dance with Hince, and a gold beaded minidress for the evening party, which stretched into the early hours.