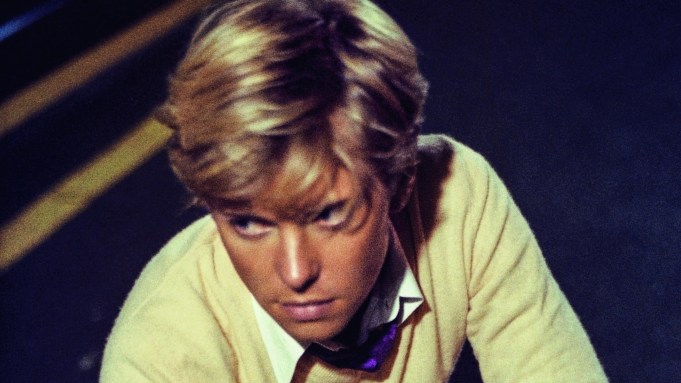 Artist and photographer Eric Boman, whose dexterity, inventiveness and charisma laid the foundation for a storied — and fun — career, died Thursday at age 76.

The fair-haired and gregarious photographer not only captured the art, fashion and social scenes in London in the freewheeling ’70s, but was also very much a central figure with fellow creatives during that time, as well as in the decades that followed after he and his longtime partner, Peter Schlesinger, relocated to New York in 1978.

Schlesinger, who had since married Boman, deferred comment on Friday.

Their 51-year union brought together two artistic talents, as Schlesinger is a highly regarded artist and author. Even their initial introduction overseas bloomed from artistic roots. Years ago Schlesinger was artist David Hockney’s then-boyfriend and muse. According to a March Town & Country article, Boman and Schlesinger met in London in 1971 at a dinner at Mr. Chow, following the premiere of Luchino Visconti’s classic film “Death in Venice.” Paloma Picasso had invited Boman and Manolo Blahnik, and Andy Warhol’s business partner Fred Hughes had invited Hockney and Schlesinger. Hockney reportedly skipped the gathering but Schlesinger attended. Boman became enchanted by “this adorable boy [who] turned up at our table in a camel hair Ossie Clark coat. Fred had not realized the movie was so long, and we got a good start (and many screwdrivers) before they arrived,” Schlesinger recalled in the article.

Initially a painter who had studied at the Royal College of Art, the Swedish-born Boman developed a career in fashion photography shooting for British Vogue, Harpers & Queen and the World of Interiors in London, Marie Claire in Paris and German Vogue. Cindy Crawford, Naomi Campbell and Paulina Porizkova were among the many models whom he photographed through the years.

With a repertoire that extended far beyond fashion, Boman’s talent for cooking, gardening and compositions led to other job opportunities, including a raft of books. “Blahnik by Boman: Shoes, Photographs, Conversation,” “Dames: Women with Initiative and Attitude” and “Rare Bird of Fashion: The Irreverent Iris Apfel” were three Thames & Hudson-published titles. (An oversized reprint of his photo of Ivana Trump in a strapless dress and sunglasses that had also appeared on the cover of “Dames” was displayed prominently at her funeral last month.) Prior to his passing, Boman was at work on a memoir and another book about his photography.

Boman also had a razor-sharp wit, as evidenced by a quip he made to WWD at a 1973 Ossie Clark fashion show at London’s Aretusa. Amid an air-kissing crowd that included famous friends like Bianca Jagger, Nicky Weymouth and Amanda Lear, Boman said of the “E.I.” initials that were embroidered on his shirt, “I haven’t done the ‘B’ yet.”

Whether in London or in New York, where Boman and Schlesinger put down roots in a downtown loft, each expanded creatively while also mingling with artists, writers and others including Paloma Picasso, Blahnik and Warhol. Before Boman switched tracks to photography, Schlesinger toted a Pentax camera while out-and-about with friends to picture them off-hours. An illustration commission assignment in 1972 from Anna Wintour, who was then working at Harpers & Queen, led to Boman borrowing Schlesinger’s camera to take his first photos for the magazine in 1972, according to the aforementioned Town & Country profile. Boman later segued into editorial shoots for British Vogue and ventured into album cover images for Bryan Ferry and Roxy Music, as well as others.

Wintour, chief content officer for Condé Nast and global editorial director at Vogue, said via email Friday: “Eric was always so much fun to be around. He had impeccable taste and was one of the true polymaths who could take up one thing after another: photography, design, art, and do it all beautifully. He could cook and then take a brilliant picture of the dish.”

She continued, “He was funny — wickedly so — and had an innate sense of beauty, and his still-life images for Vogue were both mischievous and classically beautiful. Who can forget the bunny stepping into a pot?” — referring to the photographer’s image of a stuffed rabbit with a carrot in a paw that ran with a Vogue article titled, “Is Rabbit the New Ethical Meat?”

Wintour said, “Spending time with Eric and Peter [Schlesinger] was a joy and I can’t believe he’s gone.”

Recalling his “incredible style,” former U.S. editor of German Vogue Rados Protic said Friday, “One day when I came to the studio wearing a Saint Laurent floral-printed skirt, he told me that he had designed the print when he was living in London in the ’70s,” she said. “He also had a wicked sense of humor.”

In fact, a print that Boman created for a crepe skirt in the 1973 summer Saint Laurent collection was so popular that WWD showcased three “well-bred, artistically inclined” women wearing them at The Grosvenor House Antiques Fair under the moniker “Them That Has.” Boman’s precise eye also guided his photography, as evidenced by his shot of Candice Bergen in a liquid gold mesh Versace sheath dress that was featured in “Gianni Versace — Dialogues de Mode.”

Vogue contributing editor Phyllis Posnick noted how Boman was interested in everything, whether that be art, history, antiques, flowers, food, cooking, fashion or magazines, which is right in line with Schlesinger, who is interested in and knowledgable about many things. “He had an incredible eye, a sly sense of humor and a great wit. He saw through people. It was devastating to hear him sometimes — and funny,” she said of Boman. “I think he was underappreciated as a photographer. He looked at every picture as a unique opportunity. He had so many interests. He didn’t just focus on one thing and he never became known for just one type of photograph, like many photographers.”

Boman’s and Schlesinger’s second home on Long Island’s North Fork cropped up in a 1993 issue of Vogue. Once the summer abode of the financier Bernard Baruch, the pair reimagined it with design accents that included a bronze Swedish chandelier, a limed oak table, walnut chairs, opaline vases and Wedgwood plates. Some of Boman’s plates, dishes and places were featured in the books, adding not only a personal tie and a dash of glamour but a certain authenticity. Photos of Boman can also be found in another book, “Peter Schlesinger: A Photographic Memory 1968-1989.”

Gail Monaghan, a friend of Boman’s for 30-plus years, recalled how he asked in the early 2000s if he could handle the photos for the Rizzoli cookbook “Lost Desserts” that she was writing. Having not delved into food photography, Boman wanted to give it a whirl. “I never would have dared to ask him to do it, and I couldn’t believe my luck when he volunteered,” she said. “In the end, he did the book design as well. I completely credit the success and certainly the beauty of the book to him. He was brilliant and exacting to work with and his perfectionism paid off.”

While Boman’s portfolio overflowed with fashion shoots, he also amassed a body of personal work that he kept largely stowed away as 35-mm slides for 45 years. In 2016, some of those artistic images were shown for the first time in the book “Eric Boman: A Wandering Eye: Photographs 1975-2005.” The well-traveled lensman chose the pairings and sequences for the more than 100-page tome. A shot of a glass merchant in Morocco is opposite a nearly identical image of a brass merchant in Tunisia. In another pairing, a cleanly cut Swedish topiary faces a lush rainforest. Boman positioned a photo of a sculptural memorial for a fallen soldier in Denmark with one of a deserted Caribbean island.

Having collaborated with Boman on that project, book designer Miko McGinty said, “He had so many other stories to tell through his archives. His archives must be amazing. That, I know, was just the tip of the iceberg.”

McGinty praised the rapport he had with his subjects in “Dames.” “You can see in the photos that Eric was really compelling and caring. These are all different kinds of women in the portraits — very powerful, very charismatic. But the photos have a personal connection and a personal presence. You can see them being a little vulnerable. You can see they are responding to Eric being the photographer — in the conversation, elegance, the humor and connection. You can tell the subjects were having fun. They’re probably laughing and having an incredible conversation,” McGinty said.

In addition to his husband Schlesinger, Boman is survived by a younger brother, who lives in Sweden and whose name was not immediately known.