The artist, who had at one time worked with Yves Saint Laurent, was known for surrealistic jewelry and sculptures that often seconded as furniture.

By Jennifer Weil
with contributions from Sharon Edelson, Misty White Sidell
on April 10, 2019

PARIS — Claude Lalanne, the French artist who crafted surrealistic jewelry and sculptures that frequently seconded as furniture, died early Wednesday morning in Fontainebleau, France, according to gallerist Jean-Gabriel Mitterrand. She was 93.

With her husband, François-Xavier Lalanne, who predeceased her in December 2008, Claude Lalanne was successful with the fashion world, being granted commissions from the likes of Yves Saint Laurent and Pierre Bergé, Hubert de Givenchy and Karl Lagerfeld. Marc Jacobs, John Galliano, Reed Krakoff, Peter Marino and François Pinault have collected works by the Lalannes, as well.

While often considered a team, Claude and François-Xavier Lalanne seldom worked together, although their art bore a similar aesthetic. Her creations were often organic in shape, inspired by nature — flora and fauna — whereas his mostly took the form of animals. 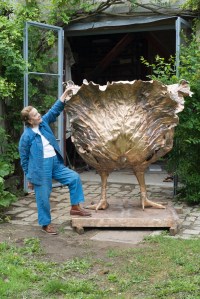 “Claude Lalanne was a bastion against poor taste and pretentiousness,” said Mitterrand in a statement. “Wielding spirit and wit, she disdained mediocrity and dismissed the oracles of the so-called ‘avant-garde’ as she did fleeting artistic trends.

“Her life’s philosophy lay in the fruit of a good day’s work,” he continued. “Right up to her final days, she worked on the installation of a monumental staircase commissioned by Peter Marino, which she had just completed.”

“I will forever remember our walks together in her gardens in Ury, [France] and my gardens in Southampton,” said Marino. “The placement of the giant carps in a sea of cyclamen in her forest is a heavenly dream, as is the 10-meter fountain she created for my rose garden. She loved the placement of sculptures in my garden, and remarked that I was the only one who understood that the ‘Lapin’ should be hidden at the border of the forest. ‘Rabbits can never be approached too closely,’ she remarked.”

Krakoff said in a statement: “My wife Delphine and I were fortunate enough to spend time with Claude and Francois-Xavier Lalanne almost 15 years ago while we were working on a book of their work. I remember their house filled with decades-worth of their art, seamlessly integrated into their warm and welcoming home.

“Claude made an apple tart from scratch that day, and shared her personal recipe with Delphine. Amazingly, she picked two extra apples from her tree that, after taking plaster casts of our mouths, she cast in bronze to create her famous ‘Pomme Bouche’ sculptures, as a gift and memento of that incredible day with them,” he added.

“Sad news…Claude Lalanne was an incredible artist, a sculpting poet, a beautiful soul and a friend. Such nice memories. I feel privileged to have met her and to have been invited at her table (with our rather large family!), and in her atelier the past few years. Natalia and the children loved her,” posted Antoine Arnault, head of LVMH Moët Hennessy Louis Vuitton’s communication and image, chief executive officer of Berluti and chairman of Loro Piana, on Instagram, referring to his partner Natalia Vodianova. “Her art will live forever.”

French President Emmanuel Macron and his wife, Brigitte, offered their condolences to the Lalanne family. The Élysée Palace presidential palace issued a statement describing Claude and François-Xavier’s work, which often was composed of hybrids.

“They invented a world of cabbage-headed men, hippopotamus-tubs, a rhinoceros-secretary, snail-fingers, apples-with-mouths melting into a unique alloy and kneading together the imagination, humor and poetry,” the statement said. “One of the most famous works of Claude Lalanne is, without a doubt, the man with a cabbage head that she created in 1968 and inspired Serge Gainsbourg’s famous album of the same name [“L’Homme à tête de chou”] in 1976.

“So many works that re-enchant the familiar and the functional, while injecting into the substance of contemporary life a bit of fairy tales’ dreamlike madness and nature’s sublime disorder,” continued the statement.

Despite his fascination for the art world, Saint Laurent only ever collaborated with one artist throughout his career. He reached out to Claude Lalanne to create two dresses for his fall 1969 collection. The artist, whose surrealistic inspiration fascinated both Saint Laurent and Bergé, molded parts of the model Verushka’s body to craft copper shapes, which were added to flowing mousseline dresses, one black and one blue.

Those are on show at the Yves Saint Laurent Museum in Paris as part of an exhibition paying homage to Lalanne and marking the 50th anniversary of her association with the designer. The exhibit is composed of fashion from the museum’s archives as well as pieces borrowed from private collectors.

Lalanne went on to become a regular collaborator with the house, creating intricate jewelry for Saint Laurent, such as copper tiaras and flower headpieces for the fall 1981 collection.

Also for the designer, Lalanne conceived a series of 15 bronze mirrors festooned with vines that were hung in the music room of Saint Laurent’s home on Paris’ Left Bank.

“Claude Lalanne observes the art of her time with her ironic and peaceful gray-green gaze. I often sought to collaborate with her. She created jewelry and sculptures for me, which I wrapped around my models. What touches me about her is that she is able to combine the same standards of craftsmanship and poetry. Her beautiful sculptor’s hands seem to push back the mists of mystery in order to reach the shores of art,” wrote Saint Laurent in 1994.

Lalanne’s oeuvres have popped up in boutiques from Chanel to Dior and Tom Ford.

A funeral service will be held for her on April 16 at 2:30 p.m. in the Église Saint Martin in Ury, the village where Lalanne and her husband lived and worked for more than a half-century. The burial is to follow.