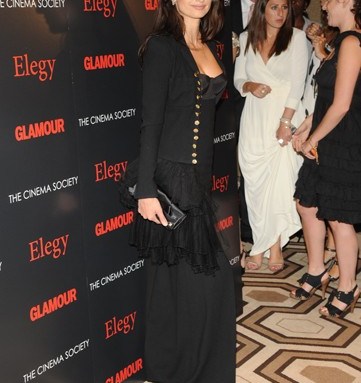 View ALL 16 Photos
School might be out for the summer, but that didn’t stop guests from reflecting on their own academic adventures at Tuesday night’s premiere of “Elegy,” co-hosted by the Cinema Society and Glamour Magazine. In the film, Penelope Cruz plays a graduate student who falls in love with her professor (played by Ben Kingsley).

At the Tribeca Grand screening, co-star Dennis Hopper copped to being smitten with a teacher in elementary school, though “it wasn’t until I got much older that my crushes got really inappropriate,” he said.

Patricia Clarkson, who appears in the movie as another one of Kingsley’s lovers, said she fancied one of her own college professors but “never acted on it.”

As for Peter Sarsgaard, he steered clear of any improper relations with his instructors. “All my teachers were Jesuits,” the actor said.

After the screening, the cast joined a crowd including Gerard Butler, Michael Pitt, Carla Gugino, Salman Rushdie and Eric Mabius at nearby Socialista.