Oleg Cassini Estate Auction: A Close-up of the Designer’s Life, Career and Collection

One of the most alluring offerings of the auction are the detailed letters, notes and sketches that the former first lady exchanged with the designer to craft her White House image. 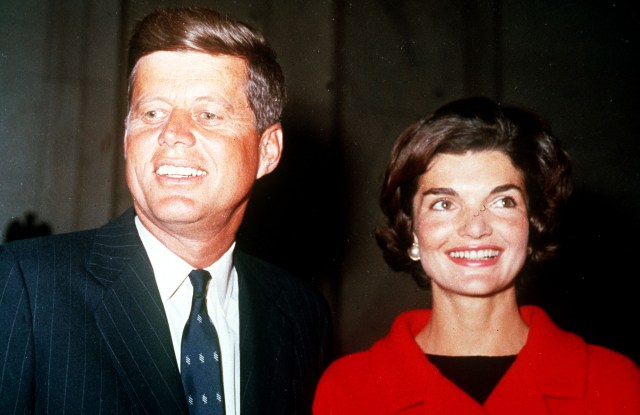 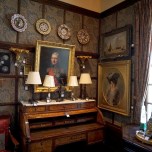 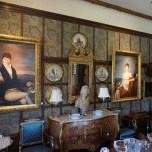 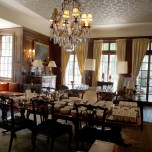 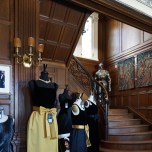 Access to its gated entrance requires security clearance and the removal of a shiny chain and padlock. Much of the grass is overgrown, the shrubs could use some pruning, the swimming pool remains covered and the horse and dogs that used to roam there are long gone. Round-the-clock security detail use two golf carts to survey the property’s 43 acres and to ferry any visitors to the main house. Their presence is to protect the 750 lots that are splayed out throughout the 35-room house in preparation of Doyle Auctions’ June 27 sale at its Upper East Side location.

Known as “Moorelands,” the 1915 Italian Renaissance-style manse built by former Tiffany & Co. chairman Charles Berg was listed for $19.5 million last year. As years of contentious legal battles between Cassini’s widow, Marianne Nestor Cassini, and the designer’s relatives wage on, Doyle specialists have been busy tagging English and Continental furniture, table settings, Kennedy family memorabilia and artwork. Cassini’s death in 2006 at the age of 92 sparked a slew of lawsuits, infighting and accusations ranging from questions of paternity to political vendettas.

What would the charismatic designer, whose made-in-America story culminated with his dressing Jacqueline Kennedy Onassis during the White House years, make of strangers trooping through his estate? Although he often mentioned his prized client in conversation and interviews, it usually anchored an amusing story, a lesson in taste or the power of style. During his lifetime, he never sold any of the vast Kennedy memorabilia that he archived along with other career triumphs.

In late January, Nestor Cassini was released after being held for six months in a Nassau County jail for defying a judge’s order to turn over financial statements and business records, among other material. At that time, she described the incident as “an abuse of power” and alleged the judge breached her own served order. Nestor Cassini and her sister Peggy Nestor led Oleg Cassini Inc. during the designer’s lifetime and afterward. They did not respond to requests for comment. Marianne Cassini’s attorney J. Vincent Reppert of Reppert, Kelly & Vytell declined to comment. Last month he sent a letter to Doyle senior vice president Peter Costanzo in an effort to stop the sale.

But on Thursday afternoon, Costanzo could be found at Moorelands, narrating a tour of the sale and reading aloud several letters to Cassini from Jackie Kennedy, as well as four from the actress-turned-princess Grace Kelly. About 1,000 people are expected to turn up June 22 to 24 to preview the sale, according to Oyster Bay police officials. Four police officers from the local precinct will be deployed next weekend to keep the traffic moving, as well as 14 deputy sheriffs, due to items that were seized from the Oyster Bay property and the East 19th Street town house. The public auction of the Gramercy Park town house has twice been postponed. Representatives from the New York City sheriff’s office did not respond to requests for comment regarding the auction date.

Handwritten letters from Cassini’s onetime paramour Grace Kelly spell out her devotion before marrying Prince Rainier of Monaco: “I think I’d rather have a ring instead of an automobile. I love you.” The letters are expected to reel in $5,000 to $8,000. There are also photos of another Hollywood actress Gene Tierney, whom the designer married and later divorced.

John Barnosky, the attorney for the four children of Christina Cassini who are battling for half of the designer’s estate, did not respond to a request for comment Wednesday. Their mother, who died in 2015, was one of two daughters born to the designer’s first wife, Tierney.

The molding, detailed millwork, wood-paneled walls and military-accented paintings hint at his Old World European leanings and aristocratic heritage. Before stepping onto the veranda that leads to the front door, visitors will find four of the vehicles that will go under the gavel — a 1973 Mercedes 350 SL convertible, a 1994 Mercedes S600 sedan, a 2004 Mercedes SL500 convertible and a 1987 Rolls-Royce Silver Spur. A late-16th-century Milanese etched and gold embellished suit of armor — one of six suits that will be sold — was positioned in the entrance hall opposite the English joined oak long table laden with $3,000 to $5,000 worth of Dodie Thayer green glazed cabbage-shaped ceramic tableware.

The main event for the fashion crowd won’t be the eight Oleg Cassini-branded dresses, even though two are knockoffs of ones worn by Onassis. More riveting is the selection of Kennedy-penned letters, photographs, tear sheets, notes and instructions, and in a few instances drawings from the first lady. All of those mementos as well as leather-bound clip books, framed photographs of Cassini clowning around in the White House, and other keepsakes from his life are housed in a cabana. A ledger from Cassini’s studio details the designs that were created for Onassis, as well as where and when they were worn, or rejected. Many include tiny swatches, including a pink chiffon costume dress and jacket with gold brocade she had approved in mid-November 1963 — 10 days before her husband was assassinated in Dallas. Signaling how drastically her life changed, Costanzo pointed to one of the last entries a few months later for eight pairs of sunglasses. Other notes reference Rose Kennedy having a dress repaired and Princess Lee Radziwill is to “not appear in my workroom record.”

The alliance between the designer and Onassis is explained in detail in her letters to Cassini. She wrote, “Givenchy is where I have always gone — It would be SO easy if I could get everything from him, but I can’t & if Jack were elected I’d never expose myself to that charge…I don’t mean that I just want you to slavishly copy Givenchy for me — it’s just to give you a steer on the sort of thing I like…I know exactly what I want if I go to an Inauguration Ball that’s no problem.”

Far more specific about the magnitude of the commitment she was looking for from Cassini, Kennedy asked in a nine-page December 1960 letter, “ARE YOU SURE YOU ARE UP TO IT OLEG?” Suggesting he put his brilliant mind to work, imagining what she would wear if her husband was the president of France — très Princess de Rethy — mais jeune…” She also indicated how familiar she was with the hazards of “PUBLICITY.” “One reason I am so happy to be working with you is that I have some control over my fashion press, which has gotten so vulgarly out-of-hand. You realize that I know that I am so much more of fashion interest than other First Ladies,” before adding that she refused to have her husband’s administration plagued by fashion stories of a sensational nature — “to be the Marie Antoinette or Josephine of the 1960s.”

As for “COPIES,” she told the designer to make sure that no one has exactly the same dress — the same color or material. “I want all of mine to be original and no fat little women hopping around in the same dress,” she said.

There are also various references to her measurements — 35.5,” 26” and 38” — give or take half an inch and what is described as “Kennedy-era original fashion sketches.” Proof of just how involved Onassis was in crafting her White House persona were the fabric swatches, sketches (by Cassini and to a far lesser degree her own), tear sheets of other designers’ fashion shots in magazines with Onassis’ handwritten suggestions and contact sheets with notes on paper from her. And the two were not just talking daytime dresses and evening gowns. The former first lady had specific ideas about handbags and shoes, too.

Aside from the designer’s name recognition and the Kennedy connection, real estate envy — a sport of sorts for some Long Islanders might be another factor in reeling in rubberneckers eager to tour two of the three-story structures. Standout pieces include a George I Gilt-Gesso Side Table attributed to James Moore estimated at between $30,000 and $50,000 and a Louis XVI ormolu-mounted burr olive and mahogany cylinder desk for $12,000 to $18,000. More attainable is the abundance of Oleg Cassini licensed products, such as crystal bowls that will be up for grabs starting in the $100 to $300 range. One security guard kept a watchful eye on the crystal Champagne flutes and other glassware that covered the kitchen, where a TV played in the background Tuesday. Indicative of Cassini’s heritage is an oil painting of Konstantin Makovsky’s portrait of his mother, the Marguerite Cassini, whose father was the Russian ambassador to the U.S.

After the Cassini family fled revolutionary Russia, Cassini grew up among other displaced well-bred families in Europe. By his own autobiographical account, even his birth was an occasion, with the doctor arriving in a carriage after midnight wearing a top hat, white tie and tails, white gloves and spats. Years later, he liked to say he arrived in the U.S. with a tuxedo, tennis racquet and talent. Moorelands’ tennis court may be testimony to that ambition, but Cassini also spoke of the importance of luck and what you do with it. Traces of his athleticism can be seen in the lots that include harness racing uniforms he competed in, sets of golf clubs and photographs of him playing tennis. Early on in his career, Cassini ran to work and his physical fitness endured, as evidenced by the men’s sports coats and blazers — all of the same size — that are being auctioned. An assortment of patterned pocket squares — a signature look for Cassini — and 30 Oleg Cassini men’s ties are each expected to fetch $200 to $300. There are also an assortment of men’s hats, including a Stetson cowboy one and a chef’s hat autographed by a bevy of Kennedys in thanks to the designer for making a spaghetti dinner during a Sun Valley ski trip.

As for what will become of Moorelands, there are rumblings that hedge fund billionaire Louis Bacon, who owns an adjacent property, plans to close on Moorelands this summer for less than half the asking price. But Bacon will not comment on the purchase.

As for what Cassini might make of the sale, Doyle specialist Louis Webre has been recalling something a couture specialist shared with him after seeing the Metropolitan Museum of Art’s exhibition “Jacqueline Kennedy: The White House Years.” His former colleague’s view was that dresses on mannequins lacked the first lady’s mystique. “It was the matte around the painting. When you remove the painting, all that’s left is the matte. It was designed for a particular purpose, and that purpose was her.”