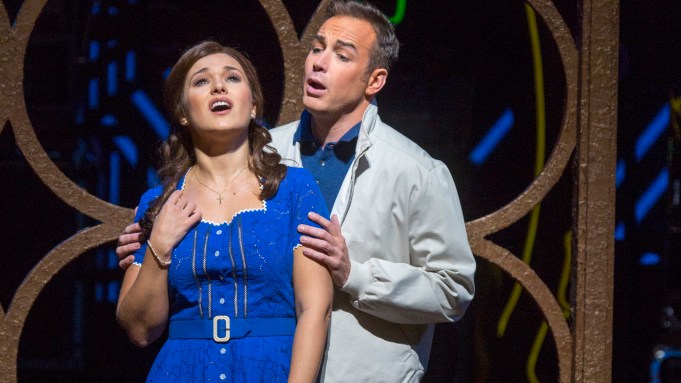 Olga Peretyatko is a soprano who made her debut at the Metropolitan Opera in Vincenzo Bellini’s “I Puritani” in April 2014, and who will be appearing there as Gilda in Giuseppe Verdi’s “Rigoletto,” which opens Tuesday.

When “I Puritani” opened, Anthony Tommasini wrote in The New York Times, “Ms. Peretyatko is increasingly a go-to choice for touchstone coloratura roles in opera houses around the world. It’s clear why. A lovely woman with a beguiling stage presence, she has a clear, shimmering voice with a bright but never hard-edged sound and the technique to dispatch runs and roulades with comfortable agility.”

Peretyatko has a three-octave range, a reach that she describes as “OK.” Her ease with it, she says, “is what I call technique. Technique is the base for a singer, actor, interpreter. The voice is changing, becoming higher, ripening like a fruit.

“It’s like being a ballet dancer,” she adds. “You have to give the audience the feeling that it’s supereasy.”

Her comfort with the top part of her range is much on display in her performance as Gilda. She will also be singing the role in Madrid, Vienna, Paris and Berlin in the next year.

But in an interview at the Met on Monday, she observes that she began by training to be a mezzo-soprano. “I wanted to be Carmen, but my fortune is to be the young girl raped and killed at the end.”

Peretyatko was born in St. Petersburg, and English is her fourth language, after Russian, German and Italian. When she made her Met debut in “I Puritani,” she says, “I was so excited. It was the longest day of my life. But once you’re onstage, you don’t have any time to be nervous.”

Her current role is in the so-called “Rat Pack ‘Rigoletto,’” which takes place in Las Vegas in 1960, rather than in 16th-century Mantua, which — with its neon set and men wearing loud brocade tuxedo jackets — originally debuted in 2013. Peretyatko says that she considers Gilda to be a strong woman because that’s what it takes “to decide to die for your love for your man and for your father.” But rather than being stuck in a sack after being murdered, she is put in the trunk of a car. “It’s not so comfortable in there,” she admits.

Peretyatko’s father is a singer in the chorus of the Marinsky Theatre, where she performed as a child, too. She said that her father was “not tough enough” to have handled the kind of big career that she is having herself. “My career is for the both of us,” she says. She is married to the Italian conductor Michele Mariotti, an expert at directing bel canto works, among them a production of “La Donna del Lago” at the Met. He is from Pesaro, Italy, where his father, a doctor, is the administrative head of the Rossini Festival. Peretyatko says that, when they first got to know one another she was “totally in love with his hands.”

On this day, she is wearing Jean Paul Gaultier and she says that, while she also owns some pieces by Lanvin, she usually prefers styles from Italian houses such as Gucci, Dolce & Gabbana and Prada because they’re better “with the curves.” She prefers dresses to separates because “If you have the dress, you have the look.”

To stay in shape, she does yoga and jogs, and the latter is one way that she has gotten to know certain cities, such as Vienna and New York. “I would never walk in Central Park, but I’ve seen a lot of it by jogging around it.” Nobody in New York cooks, she observes, but she and Mariotti like to do a lot of that, especially when they’re in Italy together. The couple has two houses in Italy, an apartment in Berlin and a place in Manhattan, but they consider Italy home.

But Berlin, she says, is one of her favorite places. “I love the city. It will always be special to me, because I came to Berlin to study. There have been changes in the last 10 years. But there’s something in the air, a freedom. If I’m down, I go to Berlin, and I just get a kick of energy just from being there.”