British model reveals plans to design his own men’s collection through a collaboration. 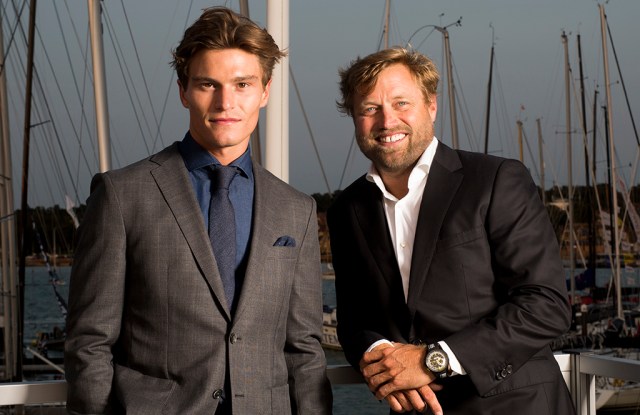 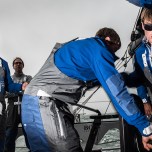 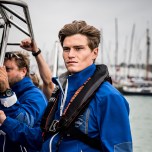 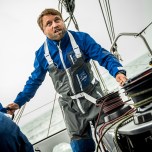 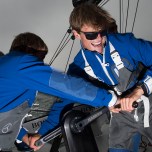 WATER WORLD: “It’s been so much fun — very wet obviously — I’m drenched to the bone,” said Oliver Cheshire, after riding the waves — in pouring rain — aboard a 60-foot-yacht sponsored by Hugo Boss.

On Thursday, Cheshire joined top British yachtsman Alex Thomson and his racing crew — all decked in Hugo Boss ATR sailing gear — for the Artemis Challenge, a 50-mile charity race that took place during the annual Cowes Week Regatta, off the Isle of Wight.

New to the sport, the 27-year old British model did his sailing homework, and focused on his grinding duties. “It lifts up the sails. You drop the sails and then you spin them, and then you grind as much as possible and then you get out the new sails,” he explained.

The “Hugo Boss” is a carbon-fiber IMOCA 60 boat that can reach speeds of up to 35 knots, or 40 mph. With Thomson at the helm, it competed against 15 other teams from France, Ireland and the U.K.

Princess Anne’s daughter Zara Phillips and her husband Mike Tindall were on board one of the competing boats.

The new face of Marks and Spencer’s Autograph collection, which launches in September, Cheshire has a number of projects in the pipeline, including writing.

“I’m still working on fashion writing, bits and bobs, and very heavily involved in, like, British fashion,” said Cheshire, who’s been blogging for years and who has reported on London Collections: Men for GQ. He’s also an ambassador for LC:M.

He said his goal is to get more into actual design. “I just love men’s clothes. People are always on Twitter asking me ‘What are you wearing?’ or ‘How do you know the trends and predict them?’ I’m thinking it’s just what I like, it’s a natural progression for me.”

Cheshire, who’s walked the runway for brands ranging from Dolce & Gabbana to Marks & Spencer, said he’s thinking about men’s wear specifically: “Smart casual, kind of date-evening stuff. Suede and leather. Brands have approached me, but for my first collaboration, I want it to be amazing.”

The Boss team finished the race in fourth place in the IMOCA class in 5 hours, 17 minutes and 24 seconds. The overall winners were Musandam, although Thomson was the first British skipper to cross the finish line. Hugo Boss donated 3,000 pounds, or $4,685, to Cheshire’s charity of choice, London’s Great Ormond Street children’s hospital.

Hugo Boss has been a sponsor of Alex Thomson Racing since 2004, supporting events including the Transat Jacques Vabre — a race from France to Brazil – in October and the Barcelona World Race.