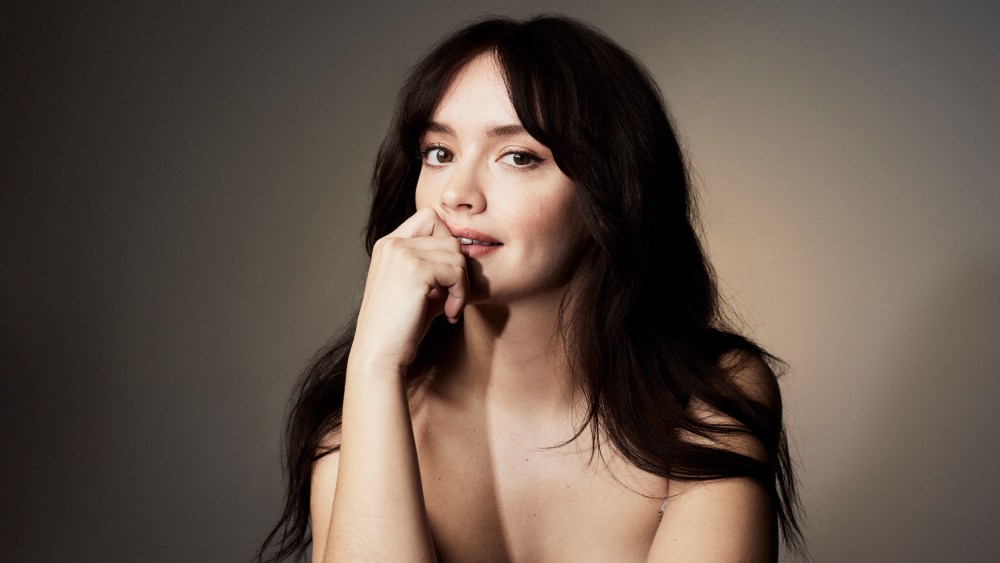 Like you, Olivia Cooke is excited to finally watch “House of the Dragon.”

The British actress, one of the leads of the “Game of Thrones” spin-off series, recently watched the first couple of episodes with a crowd at the world premiere in Los Angeles. While she’d screened the episodes several weeks ago with her mother, Cooke admits that seeing it on a big screen was a more memorable, if daunting, experience.

“I detach from it all, disassociate, and flow through it. Because that’s the only way to get through the madness of it,” says Cooke the day after the L.A. premiere, where she wore a sequined gown by Thom Browne. “But also, it was great for me to sit down and watch the first episode with a big audience and see everyone’s performances on the big screen, rather than watching it on your laptop.”

She was left wanting to watch more. “You are left on a bit of a cliffhanger, wanting to know where the series takes you,” she says. “Everyone’s performances are so good. We slogged away for 10 months over the pandemic, and the result is really beautiful.”

Early reviews of the buzzy series have been positive, validating the effort — although Cooke notes that she’s done her best to avoid critical response to the series.

The series is based on George R. R. Martin’s book “Fire & Blood,” although the adaptation veers from its source material. Cooke stars as Alicent Hightower; the character’s relationship and tension with Rhaenyra Targaryen is at the heart of the series, which explores the succession of the Targaryen dynasty.

“[Alicent] is the complete polar opposite of who I am,” says Cooke.

“She is a product of the patriarchy, and she’s quite a proud product of that. She’s a traditionalist, and she believes in order, and in ruling the kingdom in the way things have always been done,” she adds. “She doesn’t want any change, whereas I’m a staunch progressive. So it was quite interesting to try and tap into that.”

Cooke credits the several weeks of rehearsal before shooting as integral to digging deeper into the relationships between her character and Rhaenyra, portrayed by Emma D’Arcy.

“To initially come into a studio and sit in a circle with your fellow castmates you’ve just met, I think it takes the pressure off,” she says. “I would’ve been really nervous if I’d just arrived on set with Paddy Considine and Emma and Matt [Smith]. You need that period of massaging relationships to feel comfortable with each other on-screen. If you’re playing husband and wife with each other and you see each other for the first time on the first day of filming, the intimacy isn’t there.”

“House of the Dragon” is Cooke’s most visible project, but the 28-year-old actress has steadily established her leading cred through high-profile projects ranging from Apple TV+’s acclaimed series “Slow Horses” this past spring to Oscar-nominated “Sound of Metal” and Steven Spielberg’s “Ready Player One.” Cooke’s next film is “Mother’s Milk,” a drama costarring Hilary Swank, which recently wrapped filming.

“It’s about a woman who loses her son in a suspicious heroin-laden scenario,” says Cooke. “Hilary and the son’s pregnant girlfriend — me — we start our own investigation to try and figure out how he was killed.”

A second season of “House of the Dragon” is reportedly in the works, but viewers will have to wait and see who survives the first. What’s certain is that after wrapping the bulk of press for “House of the Dragon,” Cooke will be ready for a vacation.

“I wanna take a holiday so badly,” she says. “I’ve not been on holiday in ages, and I’d love to go away and throw my phone into the sea, and just drink and eat. And, I don’t know, play the bongos on my ever-growing belly. And just stuff it with more and more pasta.