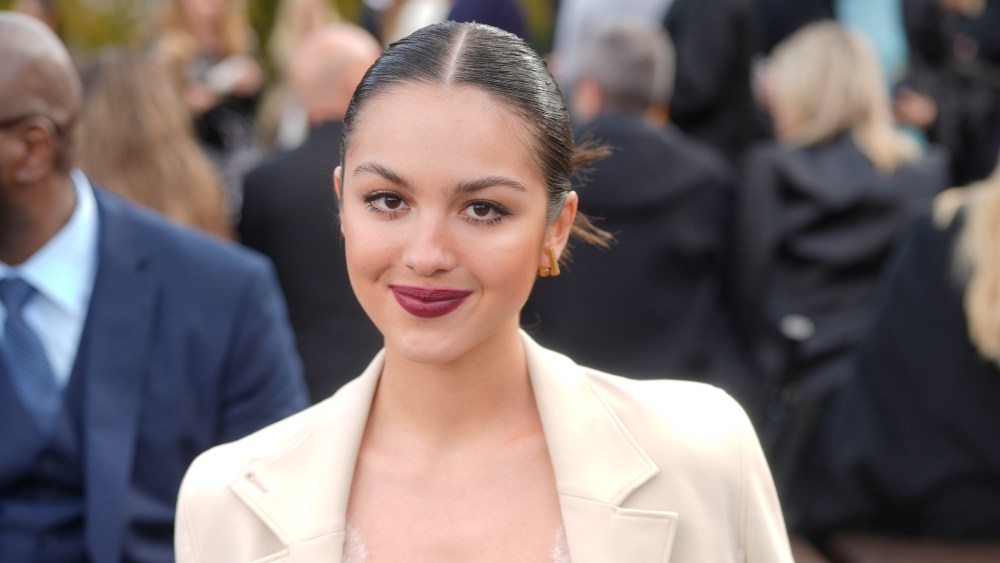 If Givenchy designer Matthew Williams and producer Etienne Russo had wanted a redemption story arc for their Sunday afternoon show, they achieved it courtesy of a Biblical downpour that took place just before the show. Some very uncomfortable guests were handed clear umbrellas (so as not to block the view) to protect themselves from the deluge. Then, as if on cue, the rain stopped, the sun came out and a rainbow — arc en ciel in French — appeared.

Kanye West took his seat next to Doja Cat at the last minute, dry from visiting Williams backstage before the show.

Olivia Rodrigo, Halsey and Noomi Rapace posed for pics as the sun peeked out.

“There’s a rainbow behind us, which I think is just so perfect. It’s almost like they planned it,” said Rodrigo. The front row was the very first fashion show for the “Drivers Licence” singer. “It’s incredible. I was just like talking about how I dreamed of these moments since I was a little girl and it’s really great to be here.”

“I don’t mind this because this shakes everyone a bit. And it’s like, you know what? This is nature, and this is the world we live in. It’s not perfect,” she said. Rapace has long been friends with Williams and has been trying to attend a show for years but got bogged down with back-to-back shooting schedules. The rain made it all the more memorable.

“We will never forget this show. It adds an element,” she said.

Her series “Django” will have a splashy premiere at the Rome Film Festival later this month, and Rapace is looking forward to reuniting with the cast and crew, including costar Matthias Schoenaerts. “I love my character. She’s a villain with a broken heart. She’s really something different, something very intense,” she said.

“I worked really closely with the writers and added and rewrote a lot of the scenes. I had a crazy dream one night and I told them about it, and they kind of wrote it into the script. It was a very collaborative process, so she’s very much me,” she said.

She did a fitting for her red carpet premiere in Paris, but wouldn’t divulge designer details. Rapace said she was heading back to Berlin after the show to continue shooting her Apple TV+ show “Constellations.”

Maisie Williams also made a last-minute entrance, but just in time for the show.

“It was so emotional it was crazy,” she said afterward. “We were here just in time saw and the whole thing — saw Kanye, it was like aaaaah.”

She was sporting a slicked back, wet-look hairstyle. “I did plan it ahead of time, but as soon as I got out of the car I thought this was a good choice,” she said. She attended the Kenzo party the previous night with bright purple hair and a burgundy beret, but admitted that fun look was a wig.

Williams and her boyfriend Reuben Selby have become fashion week regulars. “I love the experience. I think that it’s such a creative week, and I love everything from the street style to the street photography all the way through to the shows and the sets and the backdrops. It’s just a moment where you really get to see people’s creations come alive.”