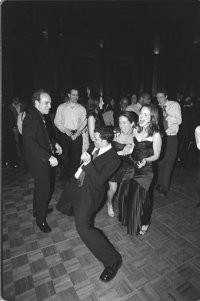 “It’s not that hard to put on a pretty dress and come to a party,” demurred Natalie Portman, who took the night off from her Harvard studies to serve as the honorary chair of Thursday night’s International Neuroscience Foundation gala. Just how did the actress get involved with the charity, a pet cause of New York’s junior social pack founded by Laurie Prince?

Prince’s sister, Liz Cohen, worked her charm on Portman and her parents during a benefit dinner last fall. “We just connected,” said Portman, moments before tearing up the Capitale dance floor alongside Cohen, Moby, Ginny Bond Donahue and the Alex von Furstenbergs.

Those who weren’t shimmying to Nelly sympathized with Shoshanna Lonstein, whose fiancé, Coast Guard Reserve member Josh Gruss, shipped out to the Gulf. Others hit the silent auction hard. Eleanor Lembo stood guard over the African safari. Prince ogled the Hogan bag, and Rachel Peters checked out the bath products. Only Amy Sacco, who presided over the after-party at Bungalow 8, came up empty-handed.

“I was looking to see if there were any cute guys here I don’t know,” she said, craning her neck. “There aren’t.”

On the West Coast, a gaggle of well-toned starlets focused on their inner well-being at an afternoon bash hosted by Lucky editor in chief Kim France and Juicy Couture founders Pamela Levy and Gela Taylor.

“This is worlds away from New York,” sighed France as guests practiced yoga in their Juicy separates, sipped herbal tea and lounged around a Hollywood Hills mansion in Uggs. “I mean, I’m actually a celebrity here, at least among the salesgirls at Fred Segal.”

While DJ Kidada Jones spun tunes from her i-pod onto a boombox, Jacqui Getty and Amber Valletta sampled the new Down Dog Couture yoga line and munched on organic snacks — it was a bit difficult for Anna Getty to teach a yoga class to Rosanna Arquette in the courtyard.

“We gave up after about five minutes,” said Getty. “You try closing your eyes and try to center with all this noise.”