On the Rise: Bel Powley and John Boyega

The recipients of this year’s Chopard Trophy for emerging talent are both Londoners with professional stage acting under their belts. 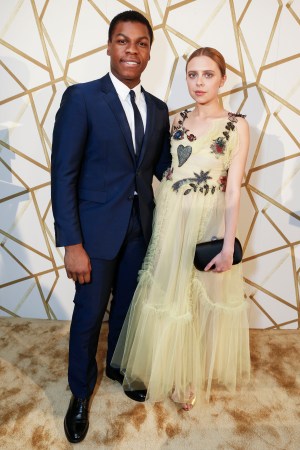 CANNES, France — “What’s in that water over in the U.K.?” asked Steven Gaydos, executive editor of Variety and jury member of the Chopard Trophy for emerging talent, in Cannes on Thursday night, as he was handing over the award to Bel Powley and John Boyega: two native Londoners, both born not only in the same year, but in the same month.

Powley assured: “It happened by accident.”

“I never wanted to be an actor,” the 24-year-old divulged. “My dad [Mark Powley] is an actor. People would think that would make me want to be one, too, but it didn’t. I was actually quite nerdy in school, I wanted to study politics and work in government,” she allowed. But a theater role at age 17 altered her plans. “That’s when I really fell in love with it,” against her parents’ loving advice, who make it clear: “Don’t become an actress.”

Today, Powley, who has gained a reputation for her ability to portray a giggly Princess Margaret in “A Royal Night Out” with equal credibility as a neo-noir stripper in “Detour,” said she can’t have one without the other. “For me, it’s about character development. I love the challenge of being given a person and having to become that person. The only thing that needs to be consistent is that the role is well rounded, in 3-D and good for women,” she told WWD, before heading back to Lithuania, where she is playing a young artist, who during World War II gets taken from her home and sent to one of Stalin’s camps in Siberia.

“The woman that my character is based on is still alive and I met her and have spoken to her about it, she actually managed to find her way back to Lithuania, which took her seven years,” Powley, who is also rumored to have a part in the next “Star Wars” episode, explained. Impossible to say whether the rumor true: When asked about it, the newcomer put on an unreadable poker face — just before breaking out in hearty laughter.

Boyega, meanwhile, who received the Sundace audience award for his portrayal of a gangster and young father in “Imperial Dreams” and became an overnight sensation following his portrayal of a defected storm trooper in “Star Wars: Episode VII — The Force Awakens,” said “if I gave away any details about the ninth episode, I think I would get assassinated — and Rian [Johnson, the film’s director and screenwriter] would probably do it himself,” he joked, before crediting the multicultural environment of his native city with making him the versatile actor that he has become.

“We are really forced to take in the specific details of people’s differences in a city like that. What it does to you is it gives you more range in terms of experience and outlook, and obviously as an actor you deal with character. London gives you access to all that.”

The son of a preacher, Boyega said he had full intentions of becoming an actor from a very young age, attending drama school and training for the theater. “The stage is my origin and I’m going back to the stage in January with Woyzek,” he revealed, “a German play about a soldier who is going through extreme post-traumatic stress while depending on his wife, who then goes and cheats on him.”

Does his father approve of his cinematic adventures? “He wants me to be more like Bruce Willis: lots of explosions, fights and that kind of stuff. They lost their hair at the same time so he feels connected to him,” Boyega teased, before turning serious again. Pointing to the trophy’s previous recipients, which included Marion Cotillard, Diane Kruger, Shailene Woodley, Gael Garcia Bernal and Jack O’Connell, he acknowledged: “What this award represents, is that there is a lot more to be done. We are in a very interesting point in our careers, it’s all about what’s next, and we are working day and night so that the artistic integrity matches up.” Amen to that.