Once in Love with Amy

Leave it to Amy Winehouse to open a concert during Paris Fashion Week by talking about the mumps.

By Emilie Marsh and Ellen Groves on March 3, 2008
View Slideshow 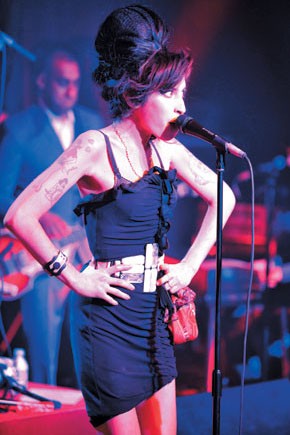 PARIS — Leave it to Amy Winehouse to open a concert during Paris Fashion Week by talking about the mumps.

“It is so big I can see it out of my eye,” the songstress said of her swollen left cheek as she took to the stage at Fendi’s party to fete its new Avenue Montaigne store on Friday night. “Do you get the mumps in France?” she asked the crowd, which was kept in suspense about her arrival until the very last moment. “I hope she won’t not show up at the last minute,” Karl Lagerfeld confessed before the curtain went up. “There’s no guarantee, you know. That’s what I like about her. She’s not only a muse; she’s a genius. She’s one of the greatest voices today.”

The British artist, who was dressed in a belted black Fendi dress, may be fashion’s latest darling, but she doesn’t pretend to be an expert on the topic. “Forgive my ignorance, because I know nothing about fashion. How long does fashion week last? Is it really a week?” Winehouse asked the rapt crowd.

“Whatever she puts together works,” said Claudia Schiffer.

“She always manages to look good,” added Jade Jagger, who’s been a fan since she first saw Winehouse playing a gig in a London pub.

Sporting her signature messy beehive, which at one point became entangled in her guitar strap, Winehouse dazzled the fashion set, which included Silvia Venturini Fendi, Kanye West and the entire Arnault clan. “She’s amazing,” said Delphine Arnault, who shook a shoulder or two during the performance alongside her father, Bernard, and brother Antoine.

“Aren’t you glad we didn’t go to dinner?” Rihanna asked her entourage as she danced up a storm during the performance. “Just awesome.”

To get a better view, Sofia Coppola stood on a chair, while a pregnant Jessica Alba leaned on her bodyguard. The Olsen twins rushed to the front.

“She’s a throwback to those amazing jazz, R&B and soul singers,” said Alba. “And Karl always puts on a great show.” The actress added that she’s supporting Barack Obama in the American presidential race, and she appears in the latest pro-Obama video, released Friday by the Black Eyed Peas’ Will.i.am, called “We Are the Ones.” In it, Alba declares, “I would like to see a cleaner earth for my child that I’m bringing into the world very soon.”

The actress is in Paris promoting her latest movie, a horror film called “The Eye.” “I’m doing the press now before I get too big,” she explained.

Although Winehouse may have started out by playing in small London pubs, this time, LVMH’s auditorium wasn’t big enough for everyone and latecomers had no chance. “This sucks,” said Milla Jovovich, who was refused entry at the door.

“She’s amazing,” cooed Mary-Kate Olsen as she and her twin, Ashley, headed backstage with Lagerfeld.

Winehouse, however, cut the small talk short and declined interviews in order to hop on a private jet back to London as soon as the show was over. “Thanks for asking me to play,” said the pint-sized soulstress as she exited stage left, adding, “Whoever asked me to play.”