As of Friday had rung up 1.2 million euros, or $1.3 million, in ticket sales against a total cost of almost $2 million for the production. 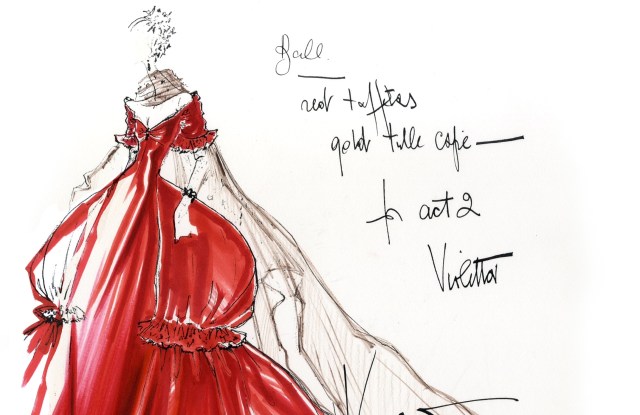 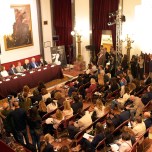 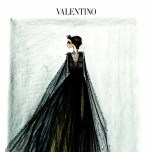 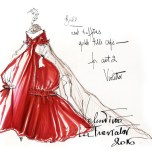 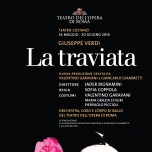 ROME — The Teatro dell’Opera on Friday presented its own “dream team” ahead of the debut of Giuseppe Verdi’s “La Traviata” on Sunday, a production by Valentino Garavani and his longtime business partner Giancarlo Giammetti. The couturier was flanked by Sofia Coppola, who is directing a lyrical opera for the first time, and Maria Grazia Chiuri and Pierpaolo Piccioli, creative directors of the Valentino brand.

The unique conjunction of music, fashion and the cinema has already worked wonders for the theater, which as of Friday had rung up 1.2 million euros, or $1.3 million, in ticket sales against a total cost of almost $2 million for the production — way before the first aria had even been sung — and drawing requests for tours to Japan and Valencia, according to the theater’s superintendent Carlos Fuortes.

No matter. Valentino had less prosaic issues at heart. “We hope the opera can be less intimidating. I have nothing against rock concerts, but this is much more romantic and visually beautiful,” said Valentino. “Ever since I was a child, I loved the music, the history, how the performers were positioned on the stage.”

He confessed “La Traviata” had “remained unquestionably” in his heart, and credited his father for loving and opening him up to the opera. Previously, Valentino designed costumes for an opera in 1994 inspired by Rudolph Valentino and staged at the Kennedy Center in Washington.

“Fashion and the movies can bring a new, young audience to the opera,” said Chiuri. “They may find it difficult to approach it, it’s like with haute couture — but you can end up loving what you don’t know,” she said, admitting she and Piccioli were latecomers to the genre, discovering it only in 2014. “And now my daughter is curious about it.”

Piccioli remarked: “Cinema, fashion and opera, together they can bring something new with different points of view.”

While details of the looks were asked to be kept under wraps on Friday, Valentino did say he designed four gowns for Violetta, the main character, “in one hour and a half,” and “not entirely inspired by the Victorian period,” when the opera is set. He revealed there would be “a touch of red, it’s logical, it’s my color,” he said with a smile.

Chiuri and Piccioli designed costumes for Flora Bervoix, Violetta’s friend, and the chorus, for a total of 1,200 looks. “We wanted to interpret them from Sofia’s point of view. We liked that Sofia wanted to enhance the character of Violetta, and make her more contemporary,” said Piccioli. “She wanted a less solemn and more personal tone. It’s a work of subtraction, taking away what is redundant in the historical context of the 1800s.”

Smiling, Chiuri said the chorus is “more fashionable, not tied to tradition, timeless, with an image closer to [our view]. There is a lightness that can be recognized as ours.”

Violetta and Flora’s gowns were created by the Maison Valentino Haute Couture Atelier, while the designs of the chorus were made in collaboration with the theater’s costume workshop, whose artisans were repeatedly praised by the designers. “How they make the wigs with real hairs on tulle, chosen depending on the color of the flesh, it’s amazing,” marveled Chiuri. “They are true artists.”

Describing their efforts to get Coppola on board, Valentino said he and Giammetti “really wanted” the director, her “fresh, new approach.” The designer recalled “the power she injected in [the 2006 movie that Coppola directed] ‘Marie Antoinette.’”

“I loved this film, the costumes, the colors, I loved how she mixed slippers in chinchilla when that did not even exist. The first thing I thought was that we must try to get Sofia, she is the perfect person for this,” said Valentino.

For her part, Coppola confessed her initial reluctance. “It was a completely different world from what I was used to, and I didn’t know what to expect. I thought I didn’t have the courage, but then I realized what an incredible opportunity this was. They motivated me to do something scary and unfamiliar,” she said, remarking proudly that she was “a distant cousin” of Italian conductor Riccardo Muti, and that she came from a family of musicians.

“I approached ‘La Traviata’ keeping the focus on the beautiful music and costumes, trying to find a part of the character [Violetta] I can relate to and connect to, creating something that I would want to watch,” explained Coppola.

Giammetti underscored that this was “the first cultural operation” for the Fondazione Valentino Garavani and Giancarlo Giammetti. He revealed projects in the pipeline with friend Eleonora Abbagnato, director of the Teatro dell’Opera’s ballet. “We have a dream for the foundation, we are looking for a location in Rome to house a Valentino museum,” Giammetti said.

“La Traviata,” directed by Jader Bignamini, with scenes by British production designer Nathan Crowley, whose previous work includes “Batman Begins” and “The Dark Knight,” will be open to the public from Tuesday to June 30. A dinner will be held after the exclusive event on Sunday, expected to draw many of Valentino’s celebrity friends.