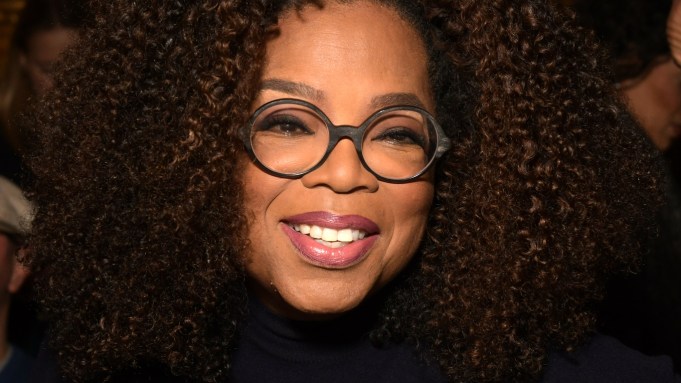 TREE LOVE: Stella McCartney’s call for guests to dedicate a tree to a loved one at her show Monday morning resonated particularly with one star guest: Oprah Winfrey, who had flown into Paris especially for the event at the Opéra Garnier.

“I’m going to plant an oak because I already have hundreds of oaks in my yard. I’m a tree person,” Winfrey told WWD.

“They represent the stability of life, the stillness of life, so I’m going to do one in honor of my mother.”

McCartney’s initiative, which invited guests to go to a dedicated web site marked on the invitation to consecrate their tree, is part of her collaboration with Canopy to raise funds to protect the Leuser Ecosystem in Sumatra, just one of the designer’s many CSR initiatives.

Lewis Hamilton, among the guests, sees McCartney as a role model when it comes to sustainability in fashion.

“One of the things I’m incredibly inspired about by Stella is she’s very much into sustainability,” said Hamilton, whose second Tommy x Lewis see-now-buy-now collection with Tommy Hilfiger just launched. “In my collection, I’m trying to catch up with her.”

“My collection is 50 percent recyclable and eco-friendly materials,” continued the Formula 1 champion, whose new racing season starts in a couple of weeks. “The goal is by the fourth collection, it’s 100 percent.”

Maisie Williams, sporting vivid pink hair and stars on her eyelids, has a new movie project in the works. “It’s a psychological thriller set in the U.K. in the Nineties,” she said.

The “Game of Thrones” star is also hard at work on her own company, Daisie. Launched last year, it offers an app that aims to connect creative types. An updated version will launch this April, and has involved putting together a magazine.

“We want it to be about the creative playground, so we’ve been getting a ton of people who are at different stages in their career and showing their creative process, highlighting them at work, it’s good fun,” she said.

Model Halima Aden, sporting a hijab adorned with the Stella McCartney logo, said she has a trip coming up in her role as a Unicef ambassador and that this May will be a “huge” month for her professionally, although she was keeping the details of her upcoming project under wraps.

Clémence Poésy just wrapped “Resistance,” a movie about a group of Jewish Boy Scouts who helped get children out of France over the Alps during World War II. As well as that project, in which she stars alongside Jesse Eisenberg and Ed Harris, Poésy is also working on her own short, about “the end of a love story,” she said.