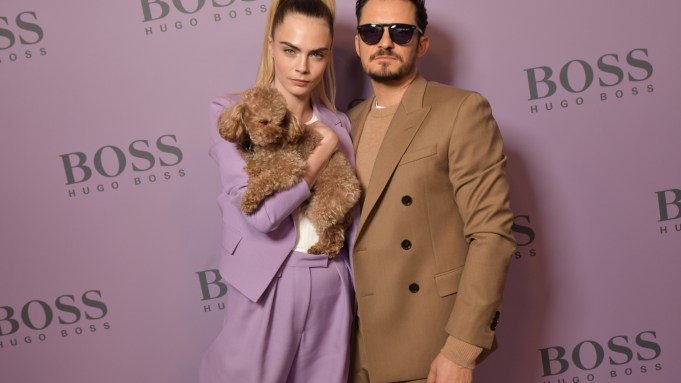 PUPPY LOVE: Orlando Bloom brought an unexpected plus one to the Boss show on Sunday.

“It’s his first fashion show,” said the actor, arriving on the show premises in Milan’s Social Music City with his puppy Mighty tucked under his arm. “Mighty does Milan!”

The caramel-colored poodle was promptly removed from his owner’s arms by Cara Delevingne, Bloom’s costar in the TV series “Carnival Row.” The actress and model, who was wearing a lilac Boss suit matching the venue’s set design, cuddled the pooch before passing him on to her girlfriend Ashley Benson. The show marked one of the couple’s rare public appearances.

It was a bit of a celebrity double date that morning: in addition to Benson and Delevingne, “13 Reasons Why” actor Tommy Dorfman and his husband Peter Zurkuhlen also attended the Boss show.

“Riverdale” star Madelaine Petsch was dressed in a vibrant red Boss suit. “Ketchup and mustard are our favorite condiments,” she said, gesturing to her friend Daniel Preda, who was kitted out in a yellow suit.

Petsch, Benson and Delevingne went over to take their seats front row, joining Amber Valletta — who is currently working on her first issue as contributing sustainability editor for British Vogue, which will be the magazine’s April issue — and yet another celebrity couple, model Toni Garrn and actor Alex Pettyfer.

Mighty, either sitting on Bloom’s lap or at his feet on the show venue’s lilac carpet, behaved beautifully.