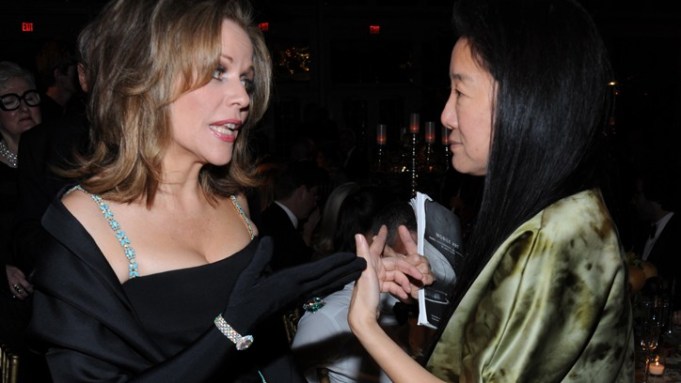 Despite declaring last week that for the first time in 20 years he wouldn’t be at the opening night gala of the Metropolitan Opera, Oscar de la Renta was in the Opera House Tuesday. But what of his protests that Karl Lagerfeld, John Galliano and Christian Lacroix had all been tapped to design ensembles for diva Renée Fleming while no American designer was asked to participate? Not only had de la Renta threatened to boycott the evening, but he told his office not to send his usual donation to the organization.

Perhaps he didn’t foresee meeting with the one force that might be stronger than mere nationalism: Mercedes Bass. Because there he was sitting in her box, along with Annette de la Renta.

“After all this brouhaha in the papers, he is here,” said Bass. “It was just a momentary thing — he was being protective of American designers.”

“I hate to hold grudges,” said the designer about his surprise appearance. He flew back from the Dominican Republic on Sunday night when Bass convinced him to attend. “Mercedes is a friend,” he continued. “And I said what I have to say. If it were the French opera, they would not have chosen an American designer.”

“We are a global opera house,” said Bass, who was wearing an Oscar de la Renta gown for the occasion. “This time it was all French designers, next time we can do all American designers and then all German designers.”

Even so, onlookers noted de la Renta didn’t leave the Bass box during either intermission. (Still, given his outspokenness over the costumes, he better have booed during the standing ovation Fleming received at the end in her Dior gown.)

As for the rest of the audience, it included regulars Henry and Nancy Kissinger, Marie-Josée Kravis and Barbara Walters, a slew of celebrities including Martha Stewart, Jane Fonda, Parker Posey, Rufus Wainwright, John Turturro and Taylor Momsen, and designers Tory Burch, Zac Posen and Georgina Chapman.

Just don’t ask Helen Mirren to make any costumes. “I’m learning to sew again, because of ‘Project Runway,’” said the Oscar-winner, who is prepping to play Prospero in Julie Taymor’s upcoming “The Tempest.” “I made myself the most hideous outfit. I made these shorts that I will never wear, just because I like to cut patterns.”

Meanwhile, the looong event (which included two intermissions and ran well over three hours — all before dinner) had a few people worried. “I’m actually texting the babysitter that we are only at the second intermission,” said new mom Julianna Margulies.

“I better get some candy,” said Molly Sims, heading for the concession line.

Luckily, a three-course meal was served afterward, in a tent decorated to look like the set of “La Traviata,” part of which had been performed.

Chapman’s dinner partner was her mother, Caroline Wonfor, who was determined to stay and get her night’s worth of fun. “I just want to try the dessert,” she said.

Others decided the evening had to end sometime. “‘Je m’en vais,’ as they say,” said Vera Wang, taking her leave.