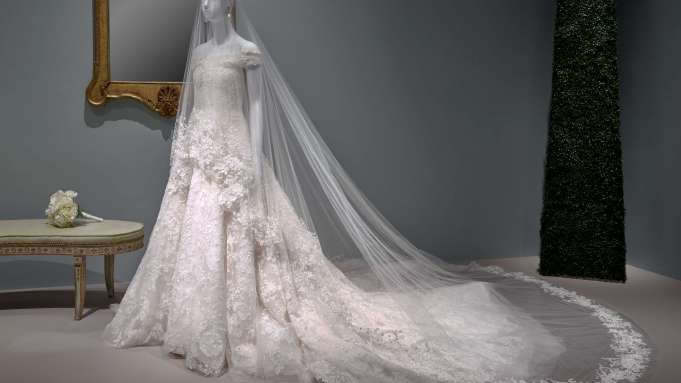 When Lynn Wyatt, the grand dame of Houston society, visited the Oscar de la Renta retrospective last year at San Francisco’s de Young museum, she felt it was high time to bring the work of her late friend to Texas.

Wyatt, who is a life trustee at the Museum of Fine Arts Houston, urged the institution’s director Gary Tinterow to view the Bay Area installation before it closed. “I was deeply impressed,” explained Tinterow. “I quickly realized Oscar de la Renta’s beautiful dresses meant something to people.”

“The Glamour and Romance of Oscar de la Renta” makes its debut with a gala reception at MFA this week ahead of its public opening on Sunday. The exhibition will feature nearly 70 ensembles from the de la Renta archives, the museum’s own holdings, the archives of Pierre Balmain and loaned pieces from some of the label’s top clients.

Curated by André Leon Talley, who also curated the de Young installation, the Houston exhibit features day- and eveningwear and differs significantly from that of earlier offerings, with some never-before-seen pieces.

“We have the great Amal Clooney’s wedding dress, which is the last wedding dress that Oscar designed before he died,” explained Talley by phone from Houston.

“It’s on loan from Mrs. Clooney, but we have been very anxious to have that dress for so long,” continued the former Vogue editor at large, who had a close friendship with the designer. “We wanted it [in San Francisco], but Mrs. Clooney reached me through her assistant to say that she felt it was too early to have her dress in an exhibit after she married [George Clooney].”

Calling the acquisition of the lace bridal gown a “diplomatic summit,” Talley noted other key pieces include loans from Beyoncé (a Houston native), Annette de la Renta and, of course, Wyatt.

“He had such great taste and en plus, he was a fabulous dancer,” recalled Wyatt in her enthusiastic drawl. “Women appreciated that he made them look beautiful and to do that, you have to have a beautiful dress.”

For Wyatt, the Bayou City was a fitting choice for this type of show. “The ladies of Houston appreciate beautiful clothes and like to dress up as opposed to other cities where they think it’s putting yourself out there too much. This is the best place to celebrate him,” she said.

Works from the Sixties to the designer’s 2014 death will be on display until the end of January in rooms that are organized around themes that resonated with de la Renta throughout his life. These inspirations include his native Spain, the Far and Middle East, his love of gardens and a magnificent client list.

The MFAH will also draw from its collection of paintings and furniture to contextualize the pieces in environments in which the designer often intended them to be worn. “He knew his clients — he knew what kind of china they ate off of,” said Talley. “It’s important to know he lived with the people he dressed. They had a certain kind of world, [which was] appropriate and elegant.”

Cindi Strauss, the museum’s director of decorative arts and design, worked to reassemble de la Renta’s world with each of the exhibition’s thematic rooms. “Oscar himself was a collector so we looked for works of art that [would have] resonated with his own personal interest,” she explained.

A large double portrait of two women in a garden by Sir Joshua Reynolds, 17th-century Chinese cabinets, 18th-century benches and another garden scene by French painter Nicolas Lancret will be seen alongside de la Renta’s designs.

“It could be the color of the dress that goes next to the painting to suggest a very romantic moment,” remarked Talley.

De la Renta’s costume jewelry is being utilized to illustrate his aesthetic. “There are so many different kinds of moods to the jewelry, so we try to make the rings, brooches, bracelets match the clothes as much as possible,” said Talley.

As curators worked this summer to assemble the pieces, news of Hurricane Harvey’s destructive path sent museum staff into emergency mode — but fortunately, the museum suffered only minor external damage.

With portions of Houston and much of its surrounding area rebuilding after August’s devastating storm, Talley sees this opening as a welcome diversion for the city. “[The people of Houston] are ready for an optimistic party,” he said. “They’re upbeat and I don’t feel a sense of any kind of depression.

“It’s about beauty — a celebration of this great man’s life and I think it’s quite inspiring and wonderful,” he added.