Artist Othelo Gervacio Lends a Hand to Virgil Abloh, Lyz Olko, COS and Others 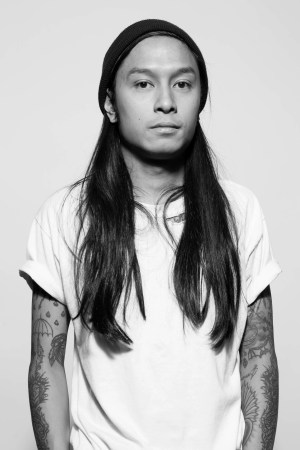 When not consumed by his day job as Alldayeveryday’s art director, Othelo Gervacio pretty much lives by that mantra in chasing his other artistic pursuits.

The artist teamed with Kanye West’s creative director Virgil Abloh to design graphics that can now be found in Abloh’s women’s and men’s Off-White collections. They are teaming up again for fall 2016. Gervacio also has lent a hand to Hood By Air’s Shayne Oliver and Lyz Olko’s Obesity + Speed collection in the past. The artist provided one of the graphics Olko used for her newest endeavor, a signature capsule collection that is sold through her site and boutiques like American Two Shot and Curve on Bond Street. And in November, Gervacio, whose career started in 2005 by working for another multidisciplinary artist Scott Campbell, will have his first solo show at Gogy Esparza’s semiunderground gallery Magic in Chinatown. Instead of his signature inkwash stencils, Gervacio will be showing more colorful drawings.

The artist and DJ Roman Grandinetti recently recruited Gervacio to help out with The Circular, a ‘zine billed as “Bad News Edition.” Designed to be a riff on another New York publication, the unsolicited mailing has a banner that reads “Post Apocalypse and Page Six.” To illustrate that sentiment, there are skeletal-type sketches of “Material grill, Golden Madonna adds bling to bite,” Gervacio informed readers that he has always been interested in sensational newspaper headlines, even collecting covers of The New York Post over the years and painting recreations of some of his favorites. “The Circular being newsprint, it only felt right to go back to the Post reference and reinterpret more of the ridiculous s–t that people eat up.”

Gervacio also had a hand in another experimental newspaper-related project, The Newsstand, a ‘zine-inspired installation that Alldayeveryday set up in Brooklyn’s Lorimer/Metropolitan subway station and Lele Saveri curated. The project started out as a monthlong venture and wound up being an eight-month one before closing last year. During that time, Saveri, whose own work will be featured in a MoMA group show next year, recruited such artists as Tom Sachs, Ryan McGinness, Cheryl Dunn and others for a mixed bag of art-related events.

While Gervacio declined to reveal what he’s crafting for Alldayeveryday — which lists Alexander Wang, COS, Nike and Rag & Bone among its clients — he said the entertainment and creative operation now also has a Los Angeles office. As for the 20- to 25-person New York team, he said, “We’re definitely not a typical creative agency. We take more of a finger-on-the-pulse approach. Most of us don’t come from a traditional agency background. We just kind of spilled into it.”

Gervacio’s appearance with other New York creatives featured in Aaron Rose’s short film for COS is an indication of his willingness to inhabit the art he helps create. Inspired by Robert Frank’s “Pull My Daisy,” shot on an iPhone and focused on New York’s current art scene, “The Bubble” was produced by Allday in association with Dazed. It also references Rudyard Kipling’s “The Conundrum of the Workshops.”

“Oh that,” Gervacio said when reminded of his own cameo, before deflecting the attention back to the film.

For him, the end game isn’t all that complicated. “I just want to do more shows and make more art.” he said. “I really just want to express my creativity without boundaries.”